Well, here we are in December. We’re going to try another mission that isn’t about a single unit but rather a playstyle or tool. We’ll be looking at the Super Jump mechanic this time, so it’s sort of like an encouragement to go try Hollow Men too! Thanks to Natetehaggressar for giving me the idea for this month’s mission.

Play any Nomad list that includes at least one of the following units and leverage Super-Jump in your game:

McMurrough and the Stempler Zond FTO are only available in Corregidor and Tunguska, respectively, so just be aware of that small detail.

As always, we’re happy to accept submissions from folks playing other factions. For example, for our Haqqislamite friends, you can go out there and abuse Super-Jump on your Khawarijs (including Tarik). Particularly interesting is the Doctor profile, which can jump up to get to a patient, or to set up a juicy spec-fired grenade.

Again, no need to write in with a full battle report. A quick story of some awesome Super-Jump trick you pulled off, or your thoughts on the rule would be more than adequate. Send me mail at [email protected] and be entered to win a blister!

Okay, let’s talk about Super-Jump, using Bran as an example as he has the most interesting edge cases. A few important things to remember:

Now let’s move into some controversial topics regarding Super-Jump. The first is the LoF question, i.e. the vertical pie-slicing question. Let’s illustrate it with a graphic from the FAQ:

The red Reverend’s $latex 180^\circ$ LoF arc is marked with the green rectangle. Although the volume swept out by the LoF arc includes a section the blue Fusilier’s base, the black terrain blocks LoF to the Fusilier. As a result, the Fusilier can shoot at the Reverend and is considered out of her LoF, so she cannot shoot back. In the Super-Jump case, one could do the same thing vertically:

One can see how you might engineer the above situation abusing Super-Jump. Technically, rules as written, it’s legal. Many TOs don’t enforce this particular rule though, as it can create a negative play experience and the highly trained special forces troopers of Infinity should be able to “look up.”

The second controversial point is whether or not Super-Jump is the same as “Move.” It’s generally accepted that Climbing+ is, which lets Climbing+ units take part in coordinated orders where others are moving normally. Super-Jump is written as a short movement skill, but Climbing+ has some additional language to make it into a “Move” on a non-horizontal surface. In traditional Infinity fashion, there’s inconsistency in the wording of both rules, even though they are basically the same “class” of rule.

The result of this inconsistency is that it’s not immediately clear whether or not some units in a link or coordinated order may move normally while others declare Super-Jump. For you Military Orders players, this also affects your Seraph’s Auxbot. This definitely affects the Hollow Men link as well as the Stempler Zond FTO, as you can either a) deny members of the Hollow Men link the ability to get cover while moving (basically you super jump straight on flat ground) or b) make members of the link idle while one of them jumps. The same applies to coordinated orders.

In summary, check with your TO/opponent about how they want to play the following before playing your Super-Jump games:

Infinity is a robust enough game system to allow for either interpretation of the above two points of contention, so just make sure you figure out how you want to play things before starting a game.

Okay, with all the boring rules stuff out of the way, let’s talk about the skill itself and how to use and abuse it in Infinity! Super-Jump is helpful for several reasons:

The most common usages, unless you play in a terrain-heavy meta, are the latter two. So let’s talk about movement pathways. Here’s Duroc as a stand-in for McMurrough, making his way up to the top of a building in a single order see if he can bait out a reveal from this hostile camo marker… 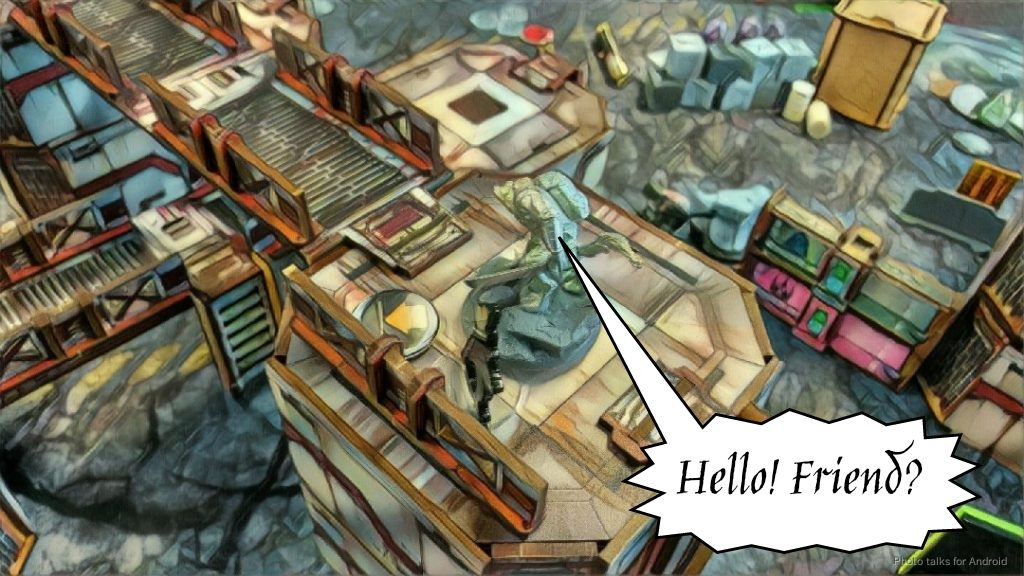 my opponent didn’t bite, so a mere two orders later Duroc is in my opponent’s DZ punching a Charontid in the face. 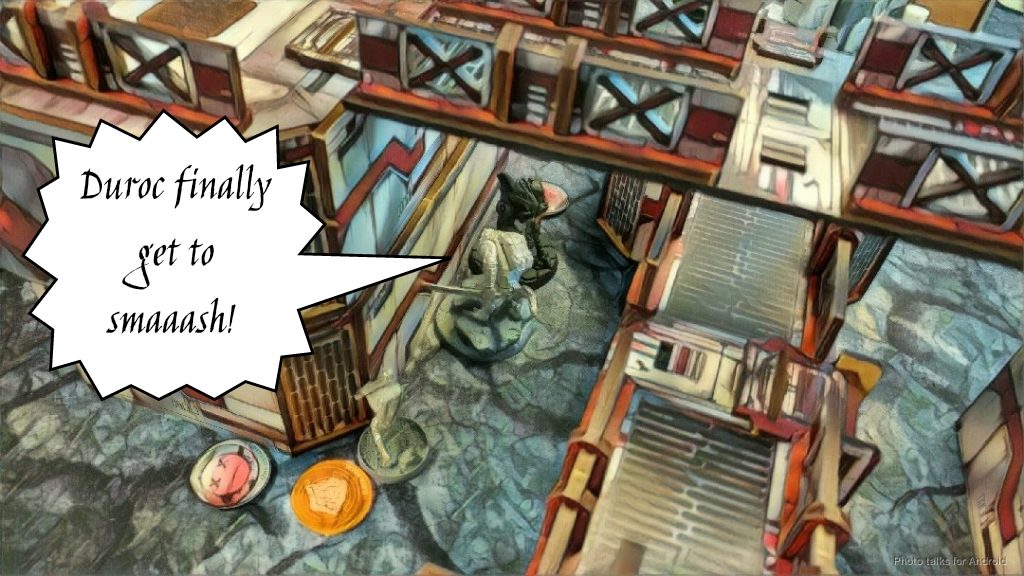 The ability to move diagonally and ignore a pretty significant amount of distance in terms of fall damage can make you extremely order efficient getting from place to place while threatening other units or accomplishing objectives. This is especially true for tables where objectives are on rooftops. The ability to just get up to the rooftop without needing a ladder or a full climb order and still be able to do a short skill afterwards can be the difference between getting a button pushed or not.

Bran is another good example of how to leverage Super-Jump for positioning, especially with his camo state. It’s a small picture, but you can see Bran atop the square building near the center of the table. There’s a Morat ML and the Lieutenant on the other two square buildings, and in this game I was able to leapfrog Bran from building to building to try to take both Morats out.

The Hollow Men benefit most from Super-Jump in terms of gaining access to otherwise impossible lines of fire. Their 6″ first movement value gives them a very respectable jump height, which can be used to pop tart something like the ML profile up and into view of something that you couldn’t see without the height. 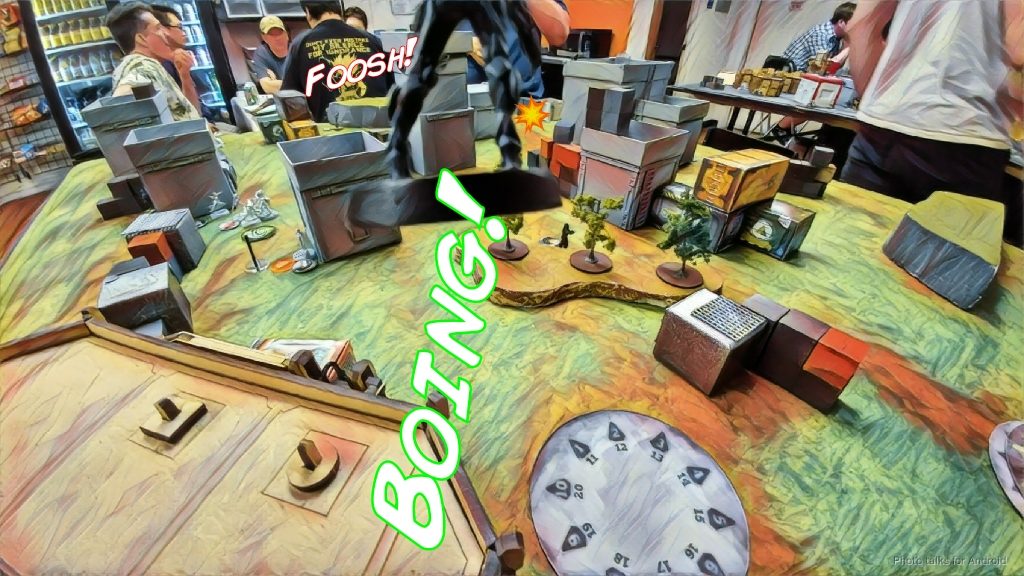 Sure, you don’t have cover, but if you’re doing the pop tart technique you should be either playing with range bands with something like a ML or by weight of fire with the Spitfire profile. The Rodoks thought they were the kings of this technique but now Nomads can do it too!

Let’s just quickly run through each of the units in Nomads that has access to Super-Jump to discuss the things you can do with them:

That’s it, folks! Now get out there and Super-Jump your way to Infinity and Beyond! Go Go Nomads!