First off, Happy New Year from the Bromad Academy! Let’s talk about some 1337 h4xx to start the year off. The Nomad faction is widely regarded as the best hacking faction in Infinity, although there are other factions that also have excellent hackers.

What differentiates the  Nomad nation from other factions that makes them truly great is that we bring two key things to the table: 1) we have amazing access to high quality hackers with interesting gear and 2) we have capability to get some truly excellent repeater coverage on the table. This month’s mission will be all about spreading the 1337 h4x around the table with repeater coverage!

Get some games in with Fast Pandas, Deployable Repeaters, and Pitchers this month! Write in about how it all went to [email protected] and be entered into a drawing to win a blister and some hacking tokens! 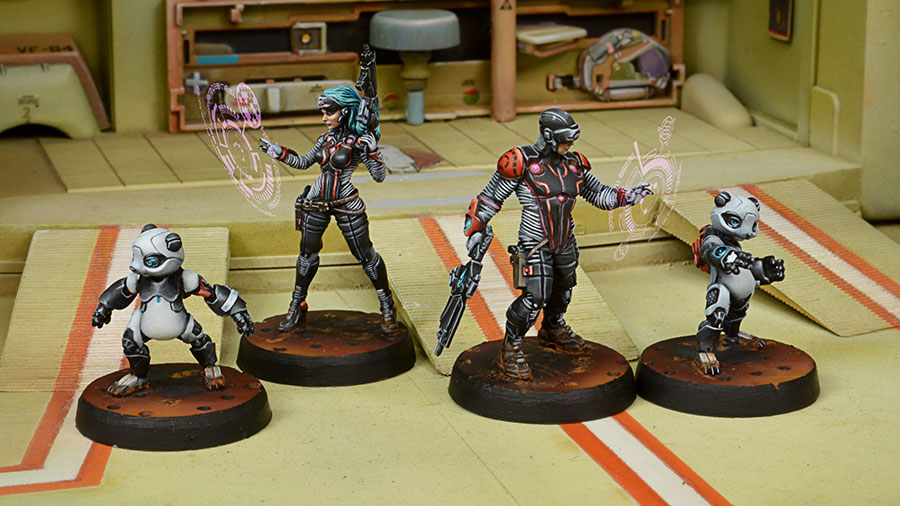 Again, no need to write in with a full battle report, just your thoughts, tips, tricks, strategies, etc.

To save you the trouble, here’s a list of stuff with the appropriate gear:

Alright, let’s talk tech. All three of the things we’re looking for you to try this months behave exactly the same once they’re deployed. They’re S1 repeaters. The FastPandas are cuter than the more traditional deployable repeaters, but they don’t do anything different once they’ve been put on the table.

All three generate a hacking area within their Zone of Control and all three are STR 1 with no ARM or BTS, so they’re easily shot off the table by just about anything. Deploying any of them can be done as a short skill or in ARO, assuming you have LoF to the active model in ARO. Deploying them is considered an attack though, so if you’ve been Stunned you’re out of luck. What’s super different is their modes of deployment, so let’s break that down:

Deployable Repeater and FastPandas are more reliable than Pitchers, since neither requires a roll. They’re both shorter range in terms of deployability though, so there’s a distinct tradeoff here. If you want to get a repeater far away in an order efficient manner, be prepared to risk the roll with the pitcher. If you’re willing to walk a Deployable Repeater or FastPanda into position, you’ll guarantee the repeater, but it will have cost you some orders. Of course, you can flub the pitcher roll twice and then you’re just sad too. The Tsyklon is probably our best Pitcher platform out of Nomads, and it’s accessible to all of our factions. Due to its X-Visor you can place a pitcher out to 24″ on 12s and out to 48 ” on 9s.

Some general thoughts on best practices:

Let’s talk hacking programs to use through repeaters, specifically the CLAW series. I’ll leave the SWORD programs out of the discussion, since Redrum is the correct answer 99% of the time.

Some of our models have cooler options, like Mary, Zoe, and the Custodiers:

And now, the dirty little secret of playing Nomads: White Noise can be declared in ARO. If something generates an ARO for your Interventor, Custodier, or Uhahu, you can throw down White Noise through a repeater! Were they setting up smoke for an MSV2 unit and walked through a repeater? No more MSV2 + smoke for you! Is their Bagh Mari link wandering around? They’re all blind! Not always relevant, but it can really shut down your opponent’s  plans. Again, Infinity is a game of cognitive load, so if you make them backtrack on their plans and have to re-formulate something on the spot, you can often force a bad decision out of them. A good thing to have in your back pocket.

So, fellow Bromads, strap on your rollerblades and join Zero Cool, Acid Burn, Lord Nikon, and Cereal Killer to HACK THE PLANET!