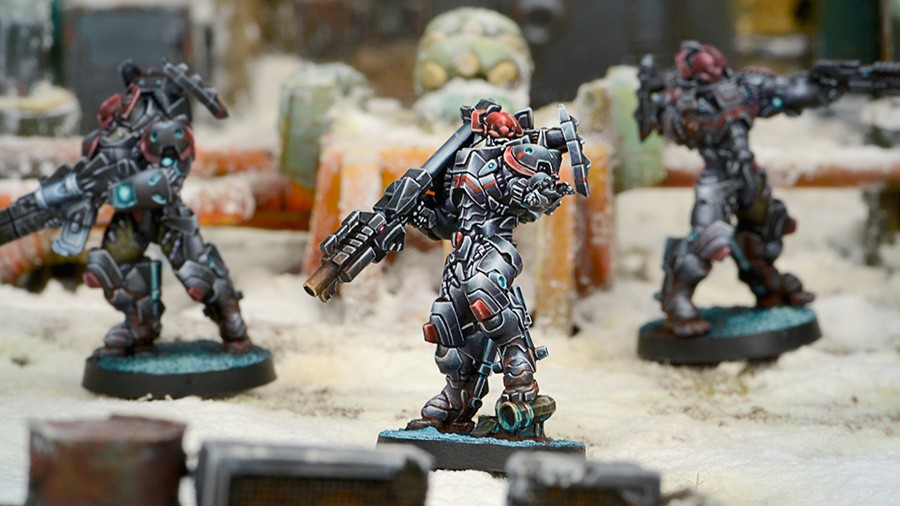 The Rodok Armed Imposition Detachment is one of the most brutal tools in the Morat armory. These veteran troopers are highly maneuverable, carry a versatile array of weaponry, and can shatter your opponents defenses with a storm of fire against their most vulnerable troops. I like Rodoks.

The Rodok profile is a fairly standard medium infantry, they move 4-2, with a decent BS12 and Morat’s typical high PH12. ARM2/BTS3 gives them a moderate amount of protection, combining with Mimetism to make them surprisingly resilient. The defining rule of the Rodoks though is their Super-Jump. This special rule allows them to jump up to the right height, slicing pies on multiple axes, which really lets them apply their firepower to precise targets.

Combi Rifle, 2 Light Shotguns. Sometimes you can’t decide between a shotgun and a combi rifle, well this profile has no such problem. With two shotguns, this profile is absolutely disgusting up close, combining the burst of a combi, with the accuracy and template of a shotgun… when you add in link bonuses, you can potentially have B4 shotguns hitting on 21’s, let that sink in a bit. The only downside is that this profile is quite a few points, but for how much damage it can inflict, it’s well worth it. If you want, you can take this profile as a 0 SWC Lieutenant, which is often not a bad choice in MAF forces who don’t worry much about Loss of Lieutenant, though in vanilla there are probably better choices.

HMG. The gun that speaks for itself, high burst, decent BS, and mimetism makes this a brutal gun fighter. By using super-jump, you can surprise your enemy with some disgusting firepower, and while you cannot claim cover while jumping, mimetism still works fine to keep the odds in your favor. If you’re taking a single Rodok in an army, and have the SWC to spend, then this is a fantastic choice.

Boarding Shotgun, Antipersonnel Mines (Paramedic, EI Assault Hacking Device, EI Killer Hacking Device). This really feels like the “standard” profile of the Rodoks, the boarding shotgun with mines brings a fairly versatile toolkit. If you peek around a corner, you’ll be hitting with your shotgun on 18’s, while getting shot back at -6 between the cover and mimetism. You can make that maneuver just that much better by dropping a mine first and forcing them to dodge. This versatile profile is also where you’ll find the specialists for the unit: paramedics, EI AHD, and EI KHD. The Paramedic used to be the default choice to add a specialist to the link, and is still fine today, especially when classified objectives or the scenario may reward taking a Paramedic, usually though, spending 1 point more on the KHD is the way to go. The EI Killer Hacker profile is probably the most popular specialist now, at a mere 1 point over the cost of the Paramedic. As a Killer Hacker you have access to a marker state with Cybermask, can blast enemy hackers brains open with the EI KHD program Maestro, the most powerful KHD program in the game. Finally, you can take an AHD, which isn’t awful, super-jump allows the Rodok get into good annoying positions to use their AHD to slow down enemy HI and TAGs as they advance, if you manage to IMM-1 something, then on your turn you can hop down and shotgun it unopposed, the only downside is the added cost over the KHD.

Missile Launcher, Light shotgun. A mimetism, BS12, linkable missile launcher is nothing to be ashamed of. As a solo piece, it is fairly risky, though by leveraging super jump, you could be hitting on a 15, while the enemy will suffer -3 from your mimetism. The added burst from the link goes a long way though, even in a Haris, just having B2 on both the active and reactive turn with this weapon can cause your opponent to have fits.

Like any Morat, the Rodoks are geared for offense. Their maneuverability allows them to catch enemies out of cover, and slice out preferred targets. In vanilla a solo HMG, combi (with 2 light shotguns), or Killer Hacker is not a bad call, each is able to be deadly in a firefight, while the combi with shotguns can brutalize mid-field units, and the KHD can provide some table control. Their reliance on mimetism to swing firefights heavily in their favor does mean that you need to be aware of enemy MSV units. In Vanilla Combined and Onyx you can use White Noise to mitigate this, though not in MAF.

Rodoks can link in two of the Combined Army sectorials, Morats and Onyx, forming either Core or Haris. In MAF armies they can also include a Raktorak (since they’re wildcard), which I honestly don’t think provides a whole ton of added use, maybe for the NCO if you want to use the Lieutenant order, but otherwise, I think they do fine on their own. A 5-man core of Rodoks, with missile launcher, HMG, and a specialist, is a total powerhouse, very much thanks to Mimetism. In the Onyx Contact Force, Rodoks can be joined by either an Umbra Samaritan or Umbra Legate, of the two the Samaritan has the easiest time keeping up, thanks to having super-jump on it’s own, though either one is going to raise the cost of the fireteam significantly. Finally, in Onyx they can be joined by a Nexus Operative (or Kerr-Nau), which is a cheap place to hide a lieutenant, though none of their profiles really seem to augment the link any. Most of the time, if I’m running Rodoks, the link is just going to contain Rodoks.