USARF is very near and dear to my heart, it was the army that got me into Infinity, and seeing them get an update is incredibly exciting. I’ve just come back from playing USARF at the Humboldt Irregular and had a great time with them, the army is so full of threats it’s ridiculous, and despite being heavily armored, they can take a load of fast attack pieces. That said, with the recent broad acceptance of mixed links, USARF has felt a bit behind, going from being the second army in the game to have Haris, to being the army with the fewest link options around.

Well, Corvus Belli has been listening and decided that it was time to give USARF a little love. Here’s a quick recap of the changes:

While there weren’t sweeping changes to any of the profiles, the changes that were received will go a LONG way to helping USARF on the table. Lets break down what these updates mean. 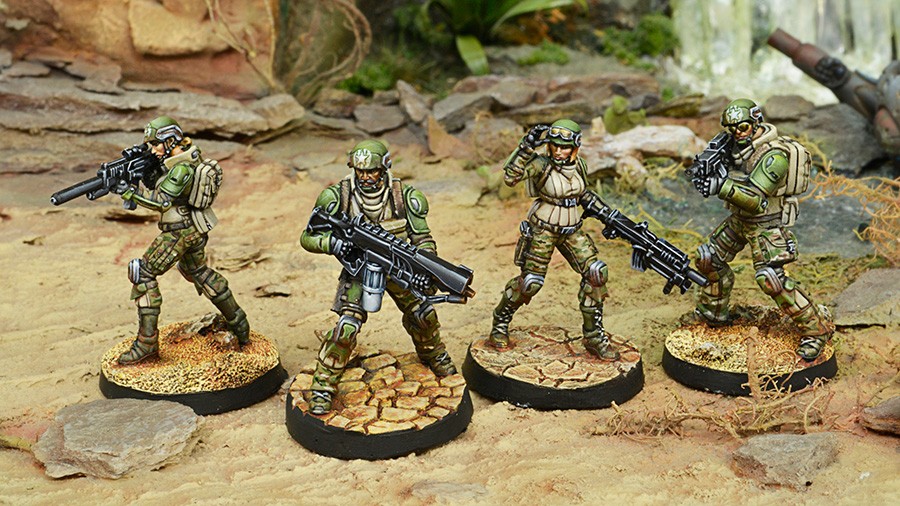 First up, the venerable Grunt fireteam is getting the help of one of his Ohio buddies. Changing one model can do a lot to change the effectiveness of a link. As it is, my preferred fireteams were just sniper nests, with the occasional HMG if I’m desperate on the active turn, or a grunt LGL (probably Lieutenant) to lob some grenades.

With the addition of an Ohio, I think that there are a few directions you can go. If you’re going for a sniper nest, then you can ramp up their ARO presence by sticking a BS16 missile launcher out there for your opponent to deal with. It doesn’t raise the cost of the link significantly, but it does give a brutal ARO that the enemy will have to deal with. If you’re going for an active turn link, which is a bit unusual, you can go with an Ohio AP HMG, which will have some devastating firepower, backed up by mid-short range grunts with rifles and heavy flamethrowers.

Now, if you want something totally different, taking the Grunt link with some of the characters below, and an Ohio can get really nasty. In this case I actually really like the Ohio with Boarding Shotgun and Grenades, since it provides some equipment you wouldn’t otherwise get (and spec firing grenades on 13’s is hilarious).

Not only are Ohio able to join Grunt teams, but they’re also able to now make both Haris and Duo fireteams. As a core fireteam, the only real changes are the ability to add Rosie or The Unknown Ranger. Rosie is going to be decent in any link you put her in, she’s both inexpensive, brings a solid gun, and is a specialist, though I don’t particularly think she shines in Ohio, as they prevent her from making the most of her Forward Deployment skill. The Unknown Ranger is a bit more interesting though. While the UKR is very expensive, he does allow the Rangers to engage in range bands they don’t typically excel at, specifically 8-16”. The armament of Ohio does also favor advancing up the board a bit more than Grunts. The downside to an Ohio team with the UKR though is that it is exorbantly expensive, so is unlikely to get much game time. Fortunately, there are now more options.

The Haris and Duo teams are really what gives Ohio a second chance on the table. The Haris/Duo profiles are the standard loadout, with rifle and dual light flamethrower, nothing terribly surprising, but like the Marauder, can lead your opponent to make some bad decisions. To support your smaller Haris fireteam, you’re going to want a specialist, and a solid weapon option. The Unknown Ranger and Rosie fill both of these roles, or you can add in a Forward Observer plus another profile of your choice (probably the AP HMG). 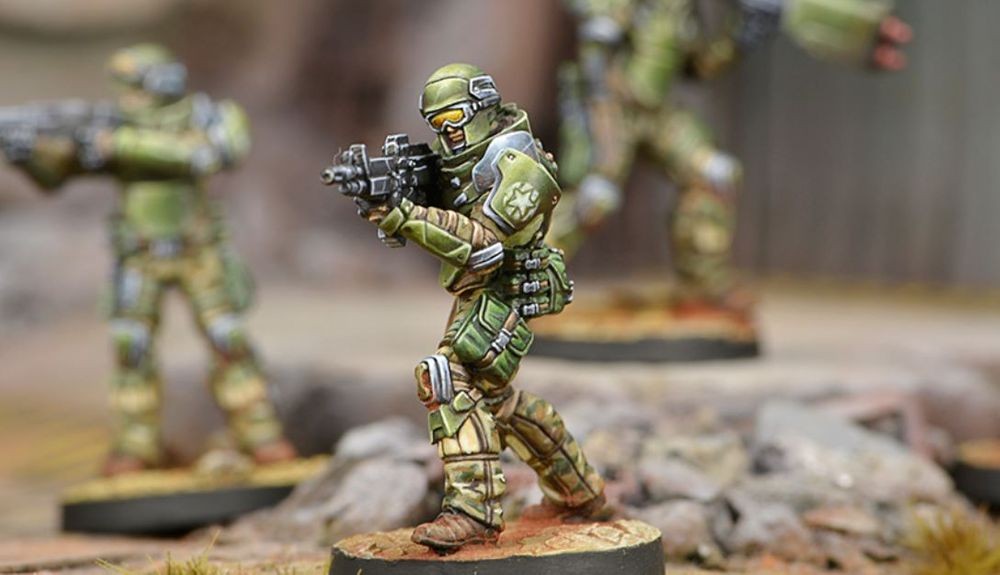 While the Marauder profiles didn’t undergo significant changes, their new added flexibility gives them some amazing new options on the table. First up, they have a Duo option. This is on their standard profile, with rifle and heavy flamethrower, unfortunately their only specialist has the same gear, so if you’re taking a Marauder duo, and not pairing with Rosie, you’re going to be taking them for offensive effectiveness. To this end, I prefer a Duo with a Molotok, since its high burst and AP makes it an effective gunslinger in its own right. Alternatively, pairing with the boarding shotgun and mines profile, with forward deployment, lets this duo lock down a section of the board with flame templates, suppressive fire, shotguns and mines, backed up by USARF armor and dogged, this pair can be surprisingly difficult to take down.

It’s also worth noting that the Marader Haris profile dropped to 0 SWC, making it even more enticing, freeing up SWC for Blackjacks and extra Grunt infiltrators.

First up, let’s talk about Rosie. She’s easily the character that sees the table the most in my USARF lists (even more than Van Zant), both in and out of links. Previously, I had preferred her on her own, providing some maneuverable firepower (Forward Deploy L1 and no link to drag around), delivering templates where the enemy likes it the least. As a Wildcard though, I think I’ll be including a lot more Marauder Haris fireteams. My Marauder Haris always included a Paramedic, but now for a point less, I get a linked light rocket launcher in the midfield! There is a caveat though, since she doesn’t have stealth like the rest of the team, she’s prone to triggering AROs from Jammers, Pheroware, and other ZOC AROs. The lack of Jungle Terrain as well can slow them down quite a bit if you play tables with lots of special terrain (like I tend to). I’ve already mentioned above that she does good work supporting an Ohio fireteam as well, oddly enough, the place I like to use her the least is in a Grunt fireteam.

The Unknown Ranger is one of my favorite models in the USARF army, and I’ve tried to wedge him into my lists from time to time, though I’ve never been terribly impressed with the performance I got from him. One of my suggestions from the beginning was to allow him to join Grunts, as often seen in photos of the model anyhow, well now he can join anything! Adding him to a Grunt link seems the most obvious, as it keeps his cost down and he provides some really good firepower. With mimetism and a 24” gun (Molotok or MK12, he transforms the Grunts into a mobile firebase, instead of a static gun tower. Alternatively, you can think about mixing him into Marauders or Ohio. The choice between MK12 and Molotok is really going to come down to personal preference, they both cover the same range bands, and are close in points, so really it comes down to paying that 2 points and 1.5 SWC for another shot, lower damage, but AP. Adding him to Marauders works against their amazing forward deployment, and while his gun is good, they already get access to a Molotok, so I really don’t prefer him there. Tossing the Unknown Ranger into a link with Ohio is a bit more interesting though. While their SWC weapons are all long range, the mid-range of the Unknown Ranger can really help them out on the move, letting their shorter range weapons (boarding shotgun and light flamethrowers) get into effective range, while providing the team with a specialist. I haven’t thought too much about the Unknown Ranger in Duos could be interesting, but I’m waiting to give it a shot.

Wild Bill is a bit of an odd ball, he’s an amazing gun fighter, but incredibly short ranged. His speed, hyper-dynamics, and NWI make him fantastic to advance up the board on his own, and going suppressive with shock ammo and ignoring cover (thanks to Marksmanship L2) can be really brutal to chew through. I’m not sure he actually links that well with Grunts, since he’s so short ranged and so much faster, but maybe if you also include Rosie or the Unknown Ranger, a short ranged Ohio, and some Grunt specialists, you could get some mileage out of him. Putting him into a full 5-man Grunt (and friends) link transforms him into something truly deadly, able to hit on 13’s out to 32” with his damage 14, shock rifle. Even worse, if you’re within 8 or 16” you can fire his dual MULTI pistols on DA mode, with 3 shots (dual wield plus link bonus), causing a potential 6 saves… gross. Ultimately, Wild Bill is “just” another good, sub-30 point, mid-ranged fighter in your arsenal, if you take him, he’ll shoot things dead.

I honestly thought USARF was already in a solid position in the game. Their troops are resilient, and they have a lot of weaponry that lets them shoot above their weight. These changes didn’t drastically change the nature of any of the troops, which some people will probably moan about, but what these changes really do is add a bit more variety to our list building.

With the updates we’ve received to USARF what is certain is that we’ll see more Ohio, and probably more Marauders on the table than previous, plus we’ll have a little extra SWC to spread around. You will keep taking defensive grunt sniper towers, though sometimes you might mix it up and take an active turn grunt team backing up an Ohio AP HMG, with Wild Bill and Rosie providing support. Now that these changes are out, I’m excited to get them on the table again, after all, they are still my favorite army.

More about the USAriadna Ranger Force

You can read all my articles on the USARF army by checking out my USARF Guidebook: