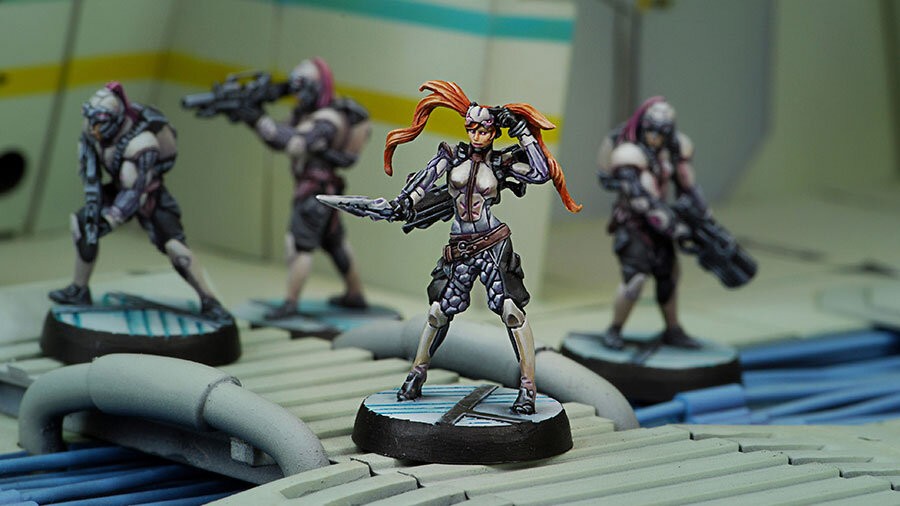 For my first Steel Phalanx unit review, I decided to go with the backbone of the army. Partially because they have fairly straight forward profiles, and also because it’s one of the units I’ve had a few games with. Primarily a defensive unit, Thorakitai are actually pretty fun on the table, they have some very unique weapon options, and are backed up by a couple characters. Since many units in the Steel Phalanx require specific characters to form fireteams, I’ll be including named characters in the reviews of the units they’re associated with, so not only will I talk about Thorakitai today, but also Nisaie and Thrasymedes. 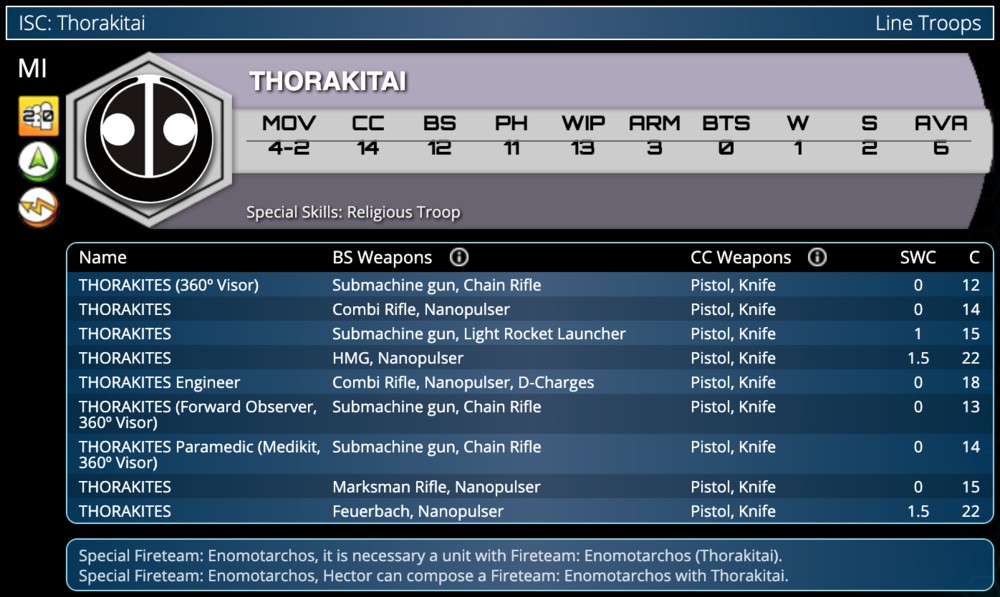 Thorakitai are the Steel Phalanx medium infantry link, and as such come with the requisite MOV 4-2. While their profile is pretty typical, that ARM3 is quite nice, giving them some respectable staying power and can be a pain to remove from cover. BS12 is very decent, and WIP13 means they’re competent at pushing buttons. Overall, they’re about what to expect from most medium infantry units for their base stats. For special rules, they have Religious, which can either be good, or a liability, depending on the circumstances, but most interestingly they have Frenzy, so be careful with them un-linked as they may become impetuous and lose the protection of cover.

Submachine gun, chain rifle, 360° visor (Forward Observer, Paramedic). The basic profile comes with some really interesting options, the SMG is a fantastic short ranged gun, but does mean the unit will suffer in firefights with even combi rifles, and the chain rifle gives them a devastating template. Combine those with the 360° visor, and solid armor, the Thorakitai can become a really powerful suppressive fire piece. Pop one in cover and it’s suppressing at the same ranges as everyone else, defended with ARM6, won’t go prone thanks to religious, and can catch you from any direction! If you get too close, they very well could drop suppression and nail you with a chain rifle. For back-field defense, these guys are really top notch. The standard paramedic/forward observer specialists also come with this kit.

Combi rifle, nanopulser (Engineer, D-charges). If you’re worried about SMG range bands, then there is the option to upgrade to a combi, you lose the 360° visor and the chain rifle, but you get a nanopulser in exchange. It’s not a bad choice if you’re actually planning on doing something more than suppression, but at two points more than the SMG may be hard to justify. The Engineer specialist comes with this load out plus D-charges, and actually makes a great backfield engineer, if you plan on just sitting back and using a Yudbot, they’re a great alternative to the Dactyls.

Submachine gun, light rocket launcher. Now we’re talking, two of my favorite weapons on the same platform! The base point cost of this profile is rather inexpensive, but 1 SWC for a light rocket launcher is a bit steep. In a link though, going up to B3 at 24” is pretty damn solid. Both weapons are very capable of swinging above their weight, so if you have the SWC, I’d strongly consider this option… if you don’t take Thrasymedes instead.

HMG, nanopulser. Pretty standard, an HMG is never a bad thing in a link, going up to B5 at BS12, if you have the SWC and want a high burst, long range weapon, you really can’t go wrong with an HMG. The nanopulser is a nice little bonus giving the model a good up-close weapon option should the fighting get too close.

Marksman rifle, nanopulser. A great alternative to the HMG, it is probably my favorite option on this list besides 360° visor SMGs. You out-range common basic weapons, and the burst bonus from the link makes this into something of a Spitfire. For a point more than the combi rifle, I’d take this every time instead.

Feuerbach, nanopulser. A much more interesting heavy weapon option, the Feuerbach is both a devastating ARO with B2 explosive ammo (in that link), and can wreak havoc in the active turn firing off 3 shots at DAM14 AP+DA! It has a bit of an edge over the HMG at long range too, only dropping down to +0 beyond 32”, instead of the -3 the HMG suffers. For the same price as the HMG, I often lean towards the Feuerbach, sometimes when you’re fighting against a TAG in cover, the DAM15 of the HMG just doesn’t cut it.

You’re going to need one of these characters to form an Enomotarchos link for Thorakitai. Nisaie brings a very solid combination of a 360° visor and spitfire to the link, which with the fireteam bonuses goes up to B5, pretty nasty. The 360° visor helps prevent you from setting up poorly, not covering all angles from enemy troops (especially AD), and means if she goes into suppressive fire, can be pretty nasty. BS13 is a slight upgrade over the basic Thorakitai, while WIP14 and BTS3 don’t help all that much. The downside to Nisaie is that 1.5 SWC, which takes a significant chunk out of your list, and Steel Phalanx can be extremely SWC starved.

Our second option for linking Thorakitai, Thrasymedes actually has two profiles with very different roles. His base profile is that of a Thorakitai who hit the gym, gaining a few points of CC and PH, not enough to make him a fearsome melee opponent though. In addition to a 360° visor, Thrasymedes carries an amazing ODD, which severely changes the game in a firefight. Furthermore he’s a specialist operative, adding a ton of flexibility to a fireteam, and is also incredibly handy if running as an Infiltrator.

Infiltrator. Running around as a solo fighter, Thrasymedes relies on his SMG to do most of the work, which is not terrible when backed up by the ODD. He may only hit on 9’s against an enemy in cover at 16”, but they’ll probably be hitting back on far worse, with fewer dice. One thing to keep in mind though is that he has Frenzy, so once he kills something with the SMG, in following turns he’s going to be Impetuous. The nanopulser is a fine secondary weapon, though your target better be really juicy to risk losing Thrasymedes if you’re going to use it. Finally stun grenades are a bit interesting, at short range you can spec-fire a Stun Grenade on 10’s, causing two BTS checks against DAM15, otherwise they enter the Stunned state, which just about makes them a sitting duck to anything else you have coming. Alternatively, you can use them as a short-range ARO, hitting on 16’s, which is often more likely to stop the enemy from attacking than shooting the SMG.

Fireteam: Enomotarchos. This profile is the one you probably are going to run more frequently, carrying the SMG and light rocket launcher, like the Thorakitai profile above, but with a 360° visor, nanopulser, ODD, and stun grenades, for 0.5 SWC less. The combination of a 24” range gun with ODD means you can easily put enemy troops at -12 to hit between range, cover, and the ODD. Even as a solo piece, I’d easily consider this profile over the infiltrator thanks to that deadly combination… you may eventually lose cover with Frenzy, but damn if blasting things with a light rocket launcher isn’t fun. 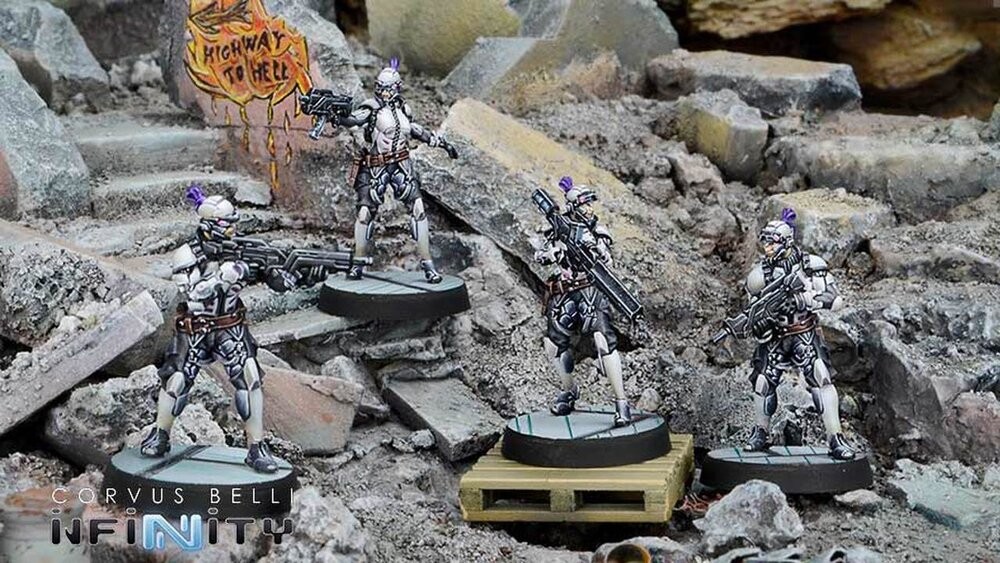 Thorakitai may look like standard Medium Infantry, but they’ve really got some interesting combinations of equipment. The basic SMG and chain rifle profile is probably one of my favorite back-field guards, thanks to the 360° visor. As far as fireteams go, mixing a light rocket launcher (on Thrasymedes), a feuerbach, forward observer, and marksman rifle gives you a very diverse fireteam, able to deliver punishing AROs, and brutal active-turn firepower, plus a pair of specialists to accomplish objectives, all for a mere 80 points and 2 SWC. If you need to punch something tough, the feuerbach has it covered, if you need high burst, the marksman rifle does a good enough job, and for everything else and ODD clad light rocket launcher will cause a ton of problems.