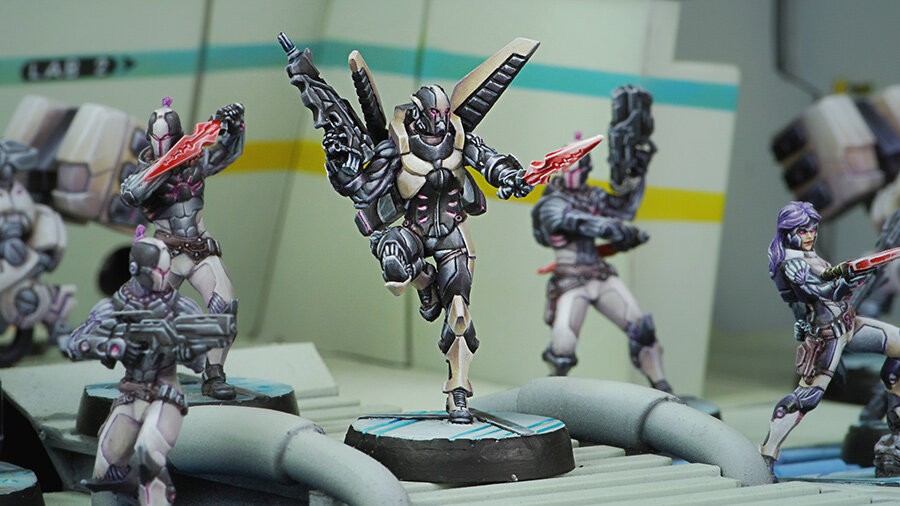 Striking from anywhere, Ekdromoi are the Airborne Deployment troops fo the Steel Phalanx. Combining exceptional close combat prowess, with extreme maneuverability, and a wide array of effective weapons, even a single Ekdromoi can cause some serious headaches for your opponents.

Taking a quick look at their profile, you’ll notice that their stats are fairly decent. CC19 is respectable, but becomes deadly when combined with Martial Arts L3. BS12, while standard in Steel Phalanx, is a very solid stat, while PH13 ensures accuracy when using Airborne Deployment. Despite only having one specialist profile, WIP14 goes to great use on their Assault Hacker. Now, it’s not just these stats that make Ekdromoi exceptional, it’s really the combination of Combat Jump and Super-Jump. Not only can they appear just about anywhere on the table, but they can also super-jump their way up to rooftops to assault vulnerable troops. The only (minor) downside to the unit is Frenzy, which means the turn after they kill something, they’re going to gain Impetuous, preventing them from gaining cover, but it does also mean you get that sweet extra order.

Combi Rifle, Nanopulser. The basic profile comes in two flavors, with either an AP CCW or DA CCW, which just means DA CCW unless you need the point to me. When I first started using AD troops in other armies, I really leant heavily on things like boarding shotguns, but lately, I’ve gravitated towards combi rifles. You don’t need to rely on getting as close, which means less risk from direct templates, mines, etc., and less orders moving. Having the ability to super-jump means you can jump from out of LOF behind an enemy outside of ZoC and have a great chance of hitting them in the ass with 2-3 combi shots, and you still have a nanopulser for getting up close and dirty.

HMG, Nanopulser. Coming in hot with a big gun, using Airborne Deployment to set up such a long-range weapon may seem counter intuitive, but often times there are amazing firing lanes going across the width of a table, instead of from deployment to deployment. The HMG is a substantial cost over the base Ekdromoi, and you’re probably not going to get much use out of the high CC skill, DA CCW, or nanopulser that you pay for either. That said, with some finesse, a super jumping HMG can be totally bonkers, just as anyone who uses Rodoks.

Chain Rifle, Nanopulser. Here’s a funny unit, replacing all significant ranged weapons (though they still have a pistol) with a chain rifle. Effectively, this means you’ve got a bigger DTW than just the nanopulser, but also means you’re FAR more likely to die in a firefight. That said, being able to AD in a troop with a massive template weapon, than can then super-jump into prime position to wipe out a fist-full of enemies may well be worth the mere 20 points they cost to take.

Chain Rifle, Nanopulser, Assault Hacking Device. A very strange combination, basically an AD warband with an assault hacking device and solid WIP to use it with. Since this profile comes equipped with a DA CCW still, it’s an interesting proposition to immobilize a TAG or other HI before wailing on it in melee. Steel Phalanx also has a severe lack of infiltrating specialists, so simply as a specialist who can get up the board in fewer orders than anything else in the army, there’s definitely some consideration here. Normally AHD are quite expensive, but because it’s tacked on to the least expensive Ekdromoi profile there is, this is actually the second-cheapest profile of the bunch. Lots to consider here, and at the very least, can be damn fun and super troll-y.

Boarding Shotgun, Nanopulser. Pretty much the standard gear among AD troops in the game, the shotgun is no less deadly with an Ekdromoi wielding it. Super-jump again comes in incredibly handy here, letting you position yourself just right to hit a bunch of models with a template, and probably catching your opponent out of cover while you’re at it. Perhaps the most interesting aspect of this profile is that the combination of shotgun and nanopulser can lead to some serious decision making for your opponent

Like all things Steel Phalanx, you can’t have a unit without some named character to crank them up to 11. Diomedes gains a point of CC and +3 BTS over the basic Ekdromoi, but more importantly, gets No Wound Incapacitation to go on top of it. Instead of the normal Ekdromoi gear, he upgrades his pistol to an assault pistol on all profiles, keeps the nanopulser, then carries either a MK12 or a MULTI Rifle. Hot damn, what a gorgeous profile. The choice of weapons is really a personal one, the MK12 gives you some incredible range, but lately the MULTI rifle has been getting my attention, dishing out AP or shock rounds as needed. Diomedes is one of those units which can eat up an entire order pool, and rightfully so, once you get him in place there’s little reason to not keep pumping him full of orders as he takes down swathes of enemy troops. Just be sure to keep an order set aside to super-jump him back to safety so he can do the job again on your opponent’s turn.

I really, really like super-jump, I think its possibly the most powerful skill in the game. If used properly, you can ignore enemy cover, slice the pie to hit tucked in troops, and retreat to safety where your opponent will have a nightmare digging you out. Close Combat is always a risky venture, and even though Ekdromoi are well equipped for it, I’ve rarely found myself in a position where it seemed worth the order expenditure compared to firing a combi or shotgun. Despite the basic options not having much additional resilience, super-jump makes them into one of the best AD troops in the game, up there with Tiger Soldiers and Fraacta.

Personally, the most common options I take are the combi rifle (sometimes AHD), chain rifle, and Diomedes. The chain rifle is so cheap that it’s often worth piece trading, even in Steel Phalanx, for the opportunity to get a template in the exact right position, and for 20 points, it’s by far the easiest to include in a list. The HMG does interest me, and I should probably get some more practice with it, it just eats up a lot of points and SWC that I feel like I can spend on more effective firing platforms. Overall though, Ekdromoi are just monsters, which if your opponent doesn’t stop fast, can really give some feel-bads… like the time I nearly lost half my army to one with a chain rifle!