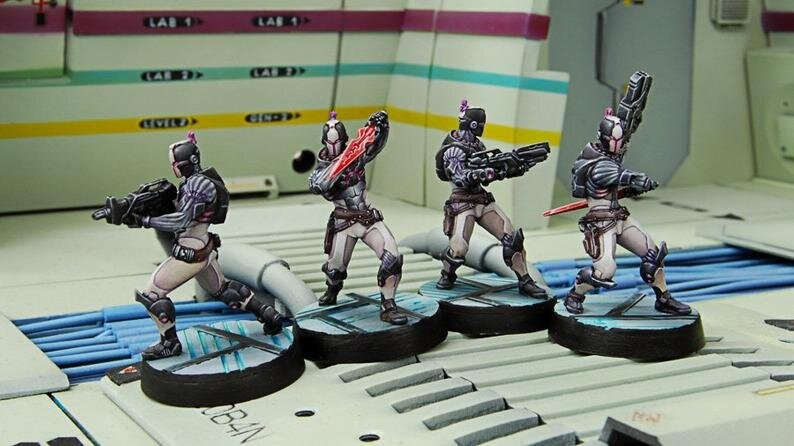 Easily the most iconic unit of the Steel Phalanx, many people who play Steel do so because of Myrmidons alone. Incredibly rad looking, and absolute terrors on the table, they really do embody the devastation that Steel Phalanx can bring. Despite looking like they’re mean for a fist fight, when used as ranged gunfighters they can shine, thanks to the high tech gear they each come armed with.

The profile of a Myrmidon alone lets you know they mean business. An impressive CC21 with Martial Arts L3 can cause a ton of damage in close combat. Don’t let that sucker you into thinking they’re melee troops though, as Myrmidons are also sporting a very effective BS12, and ODD, which inflicts a horrendous -6 mod to your opponents shooting. Kinematika L1 gives you a nice 3” engage range with an impressive PH13 for some decent odds of passing the dodge. Finally ARM2, while not remarkable, is still quite a bit of armor on such an effective troop. The downside to Myrmidons is that they’re frenzied, which can be both a blessing and a curse, but since they’re often linked in Steel Phalanx lists, it rarely comes into play.

Ubiquitous to Myrmidons are the nanopulser, smoke grenades, and AP CCW. Each one is well equipped to get close to the enemy and deliver powerful melee attacks. Furthermore, the constant threat of a nanopulser can cause a lot of anxiety in your opponents, never sure if they should risk shooting back at a Myrmidon, or do the safe thing and dodge. Since your Myrmidons come equipped with ODD, and aren’t always Impetuous, firing back can be a risky proposition, if you’re in cover your opponent will be shooting at -9, and may well be taking an automatic hit in return.

Combi rifle, AP or DA CCW (and Assault Hacker). The “standard” profile, though probably not commonly seen, the combi rifle is quickly becoming a staple in my lists, even if I only take one or two. The reason here is simple, if I’m shooting an enemy from 16-32” away, my Myrmidon will be B3 hitting on 6’s, while my opponent will often be at -12 to shoot back, forcing them to dodge. Even if I abandon cover, if they’re shooting at -9 they’ll still usually opt to dodge. If you don’t have the points for spitfire, then I’d definitely consider a combi. The DA CCW is nice if you have the extra point for the upgrade, but you have so many other anti-materiel weapons in Steel that it may be redundant. As far as the AHD goes, I think it’s worth investigating, given the model has a combi rifle, direct template weapon, AHD and ODD, it can really force some awful ARO options for enemy HI, REMs and TAGs.

Chain rifle. If you’ve only ever seen one Myrmidon on the table, this is the one. Coming with an even bigger template weapon, this profile is inexpensive for what you get. Despite lacking any real BS weapons (besides a pistol), you can usually risk being shot at to deliver a huge template, remember that your ODD is always inflicting that huge penalty, so there’s a fair chance your opponent will miss.

Boarding shotgun. Normally, people would consider a boarding shotgun only good when you’re up close, but for the reasons I mentioned on the combi rifle, in the hands of an ODD equipped Myrmidon, it can be a surprisingly deadly longer-ranged weapon… and when you get close you’re just about guaranteed to paste whatever you shoot at.

Spitfire. For all the reasons I love the combi rifle, I love the spitfire even more. If you have the points, this myrmidon is an absolute unit. When out-ranging a combi-armed opponent, the Myrmidon is hitting on 12’s, while the enemy is suffering that critical -12 to shoot back. Even outside of a link as a solo piece, the Spitfire is just brutal… You’ll probably end up frenzied on the second turn, but that just means you’re no longer burdened by trying to stay in cover!

Most commonly, people tend to think of Myrmidons as melee troops and play them as such. While they’re obviously geared for close combat, much like similar units found elsewhere (like JSA), melee is just another tool in their box, as opposed to their sole purpose in life. The incredible effectiveness they have at range thanks to the ODD should really be their driving force on the table. Even if you have the opportunity to engage in close combat, blasting with a shotgun on the way in is often going to be better than punching.

Myrmidon smoke is an incredibly potent tool in Steel Phalanx, or any Aleph for that matter, covering the advance of your troops, or working together with various Agema for the usual MSV+Smoke trick. As an entourage for more powerful Steel Phalanx characters, it can be easy to just take a bunch of the chain rifles and ignore the other options, but I’d really suggest going for that spitfire and a shotgun or combi. While Steel characters are powerful a BS12 B5 spitfire with ODD will get the job done just fine, and keep your more important troops safe from retaliation.