This game was my first time able to play Infinity in the game story in over a month. So this will be exciting. Earlier in the week we had rolled up Capture and Protect as this weeks scenario, it is one of the three scenarios that are part of our January event. The January event has Capture and Protect, Looting and Sabotaging, and Countermeasures. Since the only model with an actual anti-material close combat weapon in Tunguska is Persues, I elected to switch my sectorial for this event, going back to Bakunin.

Our table this week was a bit more open than I am used to, there was still enough in the middle that there was not dominant sniper spots that could get the whole board from deployment zone to deployment zone. We chose sides before the beacons were down. I probably would have switched sides knowing where the beacon was on Xammy’s side.

Xammy spread well out over his side of the table, this might have had a lot to do with how little covering terrain there was. The beacon being on top of a tower let him conveniently cover it with a Peeler total reaction bot. Next to the total reaction bot was Cho pretending to be a Gamma, I think. A Razer Minelayer and Gangbuster KHD set up an ablative midfield defense. Advanced up the field on the right was team Sirus. Behind where team Sirius was guarding there was a large rock with a Varangian, the Alpha and eventually a Zeta. Mid-back field had a Monstrucker and Varangian, the Monstrucker’s Yud bot by where the Zeta would be. Left side has an Epsilon Sniper, a Cyberghost, Kytta flash pulse bot, a beta Trooper and the last Varangian hiding behind buildings.

I set my Riot Grrl link team up behind a railroad container in the middle. With the missile launcher out on the right, the spitfire out to the left, and a Combi prove on top of the container. I had the reverends on the right side with my Custodier prone on a roof. I had my morlock and Taskmaster on that same side at ground level. π-Well was hiding behind a rock on my mid right. Up towards the middle I had my zero hacker prone on a raised rock. On the other side my Minelayer put himself and the mine watching a corridor into my side of the table. Zoe and a morlock his on the left as my back field defense. Bran failed his infiltration roll and had to come in by the Taskmaster. 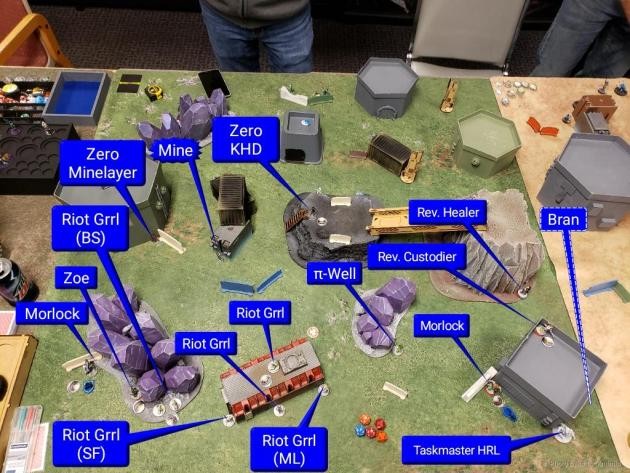 To start off his turn, Xammy had the Varangian guard run out to start smoking. I had a Riot Grrl on the roof attempt to gun down the Varangian on the left with little success. On my right the varangian was able to come around the building, Bran took a shot at extreme range and missed. Then the Epsilon decided this was a good time to take down the rooftop Riot Grrl, after a couple shots she went down.

Bringing up the Sirius Team, the Sirius bot ate a mine before going unconscious. After that the Epsilon brought down my Zero KHD. The right hand Varangian came forward and took out my Reverend Healer while Bran ducked out of the way.

The Beta Trooper Spitfire then came forward and took out Π-Well. Then the Beta manages to knock out my Riot Grrl Missile launcher before hiding. Then the Zeta started to reposition forward along my left side. Out of orders, Xammy ends his turn.

I wind up canceling the impetuous order for my right morlock, not wanting to deal with the Epsilon and not being able to lay down a smoke screen. My other morlock comes forward to provide cover for the Grrls to come out a bit more. I bring my Taskmaster forward to take down the TR Bot and catching Cho in the blast. The Peeler only goes unconscious and I move on to taking out the Epsilon. I believe that I had my Spitfire Grrl take down the Beta. I then bring forward the left Morlock to complete Extreme Prejudice by having the Morlock performing a Coup De Gras against the Beta. After repositioning my Riot Grrl net to be more ready to deal with a Zeta, I end my turn.

The Zeta comes forward to try and bully the Riot Grrls a bit. He has the monstrucker bring back up the Peeler which gets him Test Run. After the Zeta takes down my other Zero, and a Morlock, then takes a wound; Xammy hides it behind some boxes, and ends his turn.

I have my Taskmaster walk across to get eyes on the beacon, bringing forward Koalas and putting them into Standby. I have my Custodier launch a pitcher forward near the beacon and then end my turn.

The Zeta comes forward, shooting down the two Koalas before trying to glue the Grrls, the Grrls remains unstuck and put some wounds onto the Zeta. The Zeta grabs the beacon and starts to retreat before getting gunned down. Xammy spends some orders setting up his defensive net and ends his turn.

The only chance I have is to have Bran make a mad dash to the beacon and pick it up. In the process of reverting to marker state and running, Bran gets discovered and gunned down.

With neither beacon captured, and a classified each, it would have been 4-4, but Test Run had the extra point tag for this mission, making it a:

One of the most important things for me to remember, is that if the Taskmaster does not have an HMG, it’s bringing along Koalas. I neglected the Koalas in my deployment and that changed how I positioned models. I made a mistake with the third Grrl that I left out. I was too worried about templates that I moved her to a spot that exposed her to fire she couldn’t have responded to in a way to remove her from danger. I think the biggest thing for me was the overexposure of pieces, I lost a lot of models turn 1 because they were in a position that allowed Xammy to determine the terms of engagement. I also need to have a more complete idea of where things are before picking which side I want.

This was my second game using more evenly split groups. The upcoming format, 400 points, with Tactical Window, lends itself really well to having an even split, a 10-5 or 10-4 doesn’t do as well. I have found that I have much fewer orders that feel dead, or wasted. With this list I was able to split up my attack groups, so that each attacking piece would have their own set of 7-8 orders to accomplish something in a turn. In this one I had the Grrls and Bran in the same group, figuring I would either be attacking with the Grrls, or disrupting with Bran. The other group had Π-Well, Zoe, the Reverends and the Taskmaster; I set up this way to be able to have both of my heavy attack pieces, the Grrls and the Taskmaster, be able to operate independently without affecting each others resources.

An interesting side effect of playing the tactical window format is how much it has improved my view of the Taskmaster. Being able to freely move between combat groups is amazingly helpful with a split group. Having the extra command token available from not having to spend it on the taskmaster is amazing. It allows for an extra coordinated order, or a reroll on a doctor engineering, or reforming a link team. I also like how the way the lists are structured that they can fold into each other well. Often leaving just a couple orders behind to still accomplish something great. So, in short, I love tactical window and I love the more even splitting of combat groups.