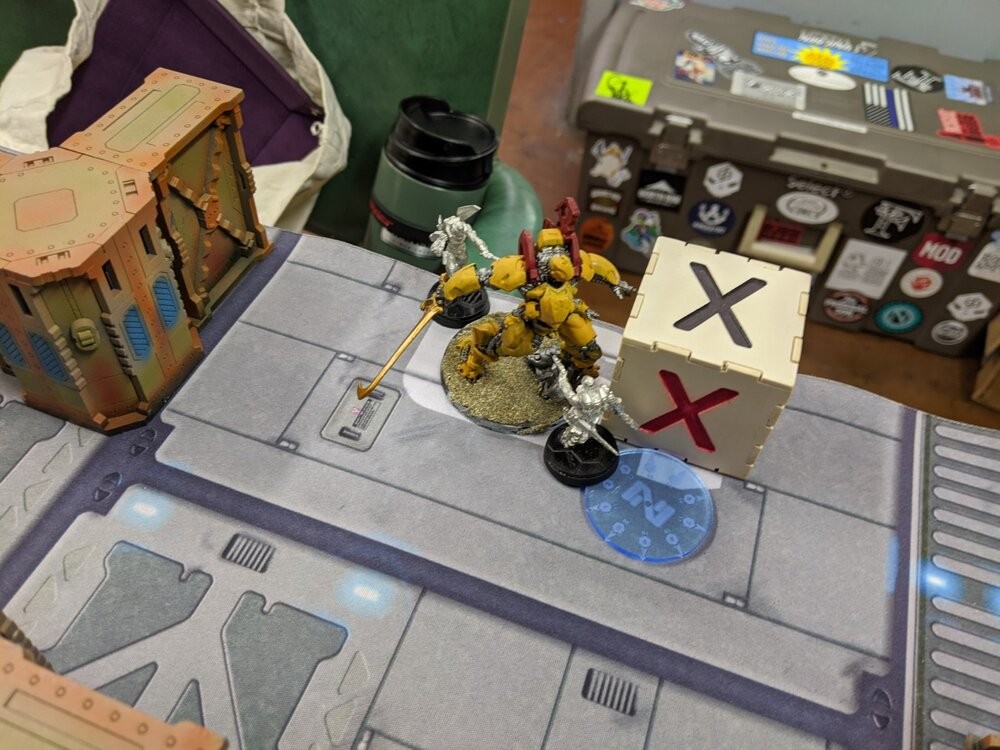 This past weekend I had the pleasure of going to Raindog’s Rampage, an annual event put on at Ordo Fanaticus (a local gaming club), which benefits various charities in the Portland area. It also includes a potluck food contest, sportsmanship awards, painting, etc. The missions are not standard ITS missions, but instead home-brew ones intended to help some of the newer players pick up various aspects of the game. All around, it’s an incredibly fun event with a great atmosphere.

The scenarios were non-ITS, there was a lot less emphasis on specialists (non-specialists could activate a console at -3 WIP), and some crazy things like booby-trapped data packs that blow your troops to pieces. The points were set at 200, and Limited Insertion was in place. Because of the fun-nature of the event, I decided I’d bring a more practical list, led by Hector, as well as a more crazy list with a fist full of Ekdromoi. 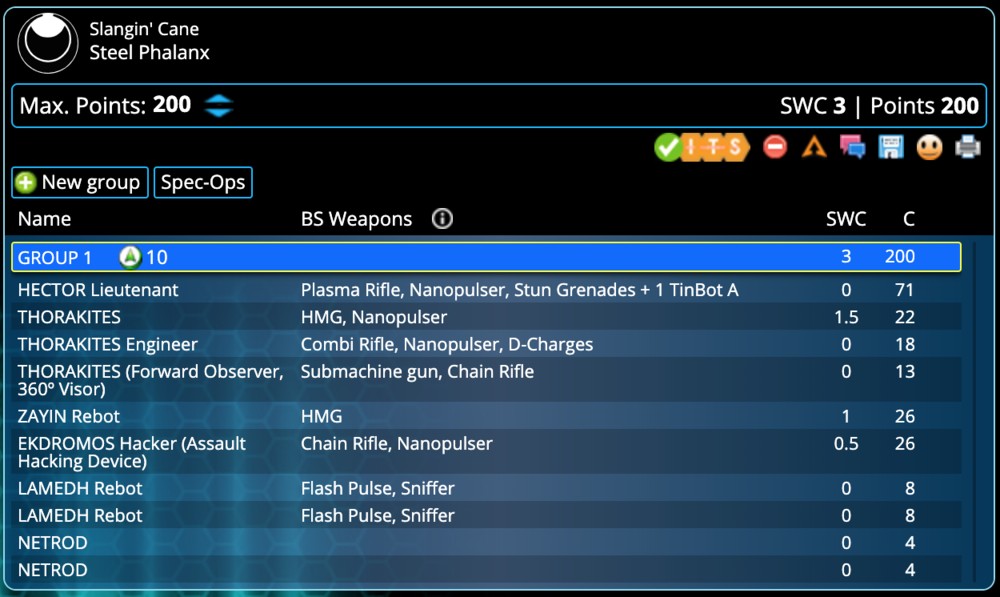 The Hector list is fairly straight forward, Hector goes around beating face while everyone else cheers him on. It still has one Ekdromoi, because I was inspired by my recent article to take them, but otherwise relies on Hector, his link, or a Zayin to do the heavy lifting. The second list is a bit crazier though, with Diomedes, an Ekdromoi HMG, and an Ekdromoi chain rifle all coming in from off the board. This severely limits my order pool the first turn, but has some insane alpha-strike potential. Short of that, I don’t really have any other sources of firepower worth mentioning. 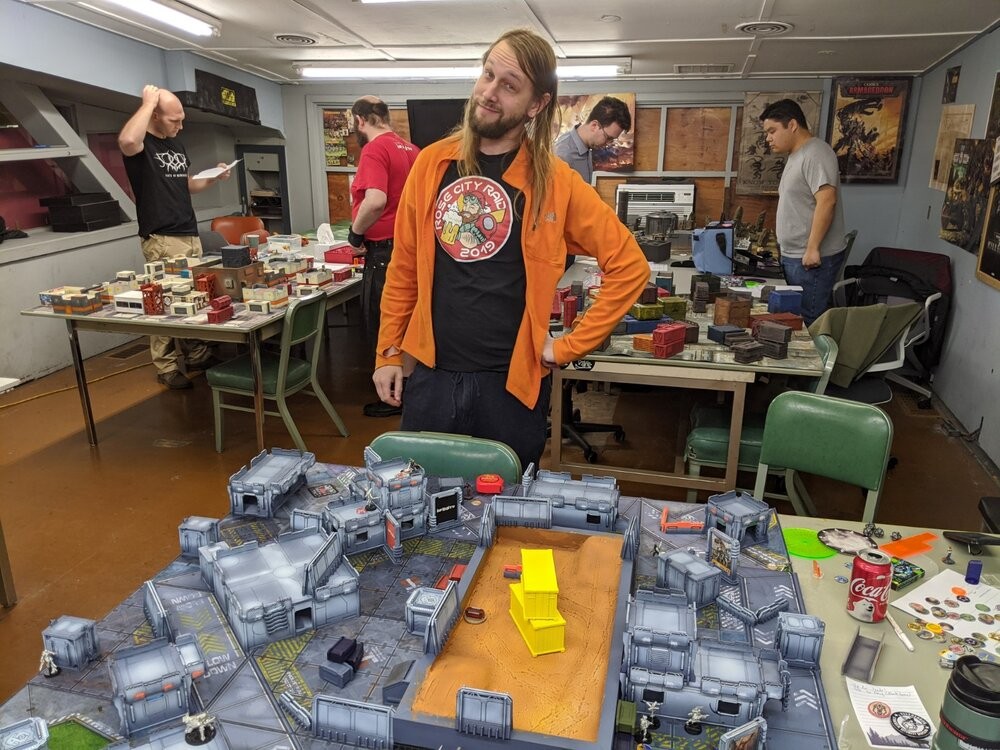 For the first round we were given the opportunity to challenge opponents, this led to me facing down my good buddy Than and his Spiral Co. The mission involved 5 consoles in a + shape, which when activated turned into scoring areas, points awarded for activating consoles, and controlling the areas around them. Overall, I loved this mission design and may steal it in the future.

Knowing Spiral was full of dirty tricks, I decided I’d give the Ekdromoi list a whirl and see what I could do. I took the first turn and decided to drop in all of my airborne troops. Diomedes and the Chain Rifle took on his left flank with Le Muet (actually a Taagma Schemer), a link, and a bunch of Chaksa. The right-flank was taken by the HMG. First thing I did was move my chain rifle into position to fire at his Kriigel to open him up to attack from Diomedes. While the Ekdromoi died in his effort, he did manage to knock the Kriigel out. Next up Diomedes hopped up to shoot Le Muet, which turned out to be a Taagma, I missed all my assault pistol shots, while he shot me in the face with a pistol, RUDE! I kept the pressure on, eventually taking him down. On my second turn the Ekdromoi HMG took out the Reex link on the same flank before taking an objective. Than started his second turn in retreat, and his second turn with a mere 3 orders. Despite the horrendous damage inflicted by my Ekdromoi, Than managed to tie it up.

This scenario was very much like Countermeasures, except with a custom deck that included all kinds of crazy things, from winning a F2F at -6, to placing a mine, to killing something in melee. It was very fast paced, and you’d replace a card as soon as you scored it, meaning you went through the deck very fast. My opponent was recently coming back to Infinity and running both a Guija and a Mowang! I again took my Ekdromoi list just to see what would happen. Our table was pretty cramped, which let me get into melee, and as it would turn out, Diomedes is killer in combat, as are the Ekdromoi, taking down both the Guija and Mowang in melee alone. Despite nearly tabling my opponent, he did excellent work accomplishing the cards and won the event. The most memorable card was winning F2F at -6, so I took my Myrmidon officer up to shoot at a Zhanshi in suppressive fire, who was in cover and in my +0 range for the shotgun, simultaneously he was at -9 to hit thanks to cover and my ODD. When we rolled the dice I missed with one shot and rolled a 1 with the other dice, and he rolled a 2, giving him the card instead of me! Doh!

My third opponent was a great guy named Doug, who I’ve played before, and is overall a very fun opponent, and he was piloting ForCo, centered around a Kriza, Securitate core, and Zeros. Knowing he was a bit more challenging of a player I decided to take Hector out for a spin. In this scenario there were a bunch of tokens on the table, which you’d move over to score. If the back side of the token had a star on it though, you took a DAM15 EXP hit! You could use a hacker or engineer to secretly check one in ZOC on a WIP roll, or Forward Observe them, fortunately my list had a hacker, engineer, and forward observer. I started the game very aggressively, firing my linked HMG at his linked Feuerbach… he hit twice and I missed all 5 of my HMG shots, which meant that Thorakitai was TOAST. I really had to clear the firing lane so Hector moved to give it a shot, and thankfully won the roll. With the coast clear I spent orders forward observing markers and running over them. Doug responded in kind, revealing and capturing several, while putting my over-extended Hector link into an awful position between mines. My first attempt to clear a mine went comically awful, running some quick numbers, I figured a Move + Dodge with my Ekdromoi had a very reasonable chance of surviving (roughly 75%), so naturally when I performed the maneuver I rolled a 20 to dodge, and an 8 for my armor… lovely. Soon another mine was crept up onto my link and I had to think of another way to clear it. My poor flash pulse bot seemed like the most expendable option, so naturally it ran up into position, discovering the Zero, while tanking the mine hit. Not knowing what to do next with it, I ran it over an un-revealed token, which naturally was a bomb and blew it to pieces. By the end of the I had a solid lead, and played a very enjoyable game. 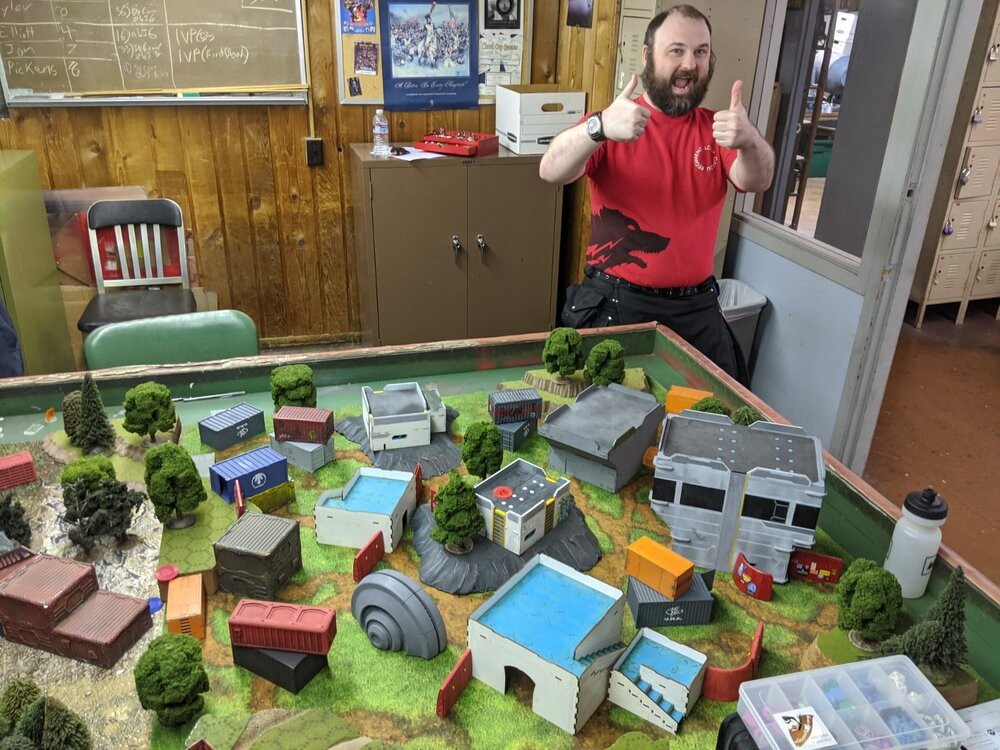 My last round was against Sgt. Rock and his Corregidor. Despite doing well with Hector, I really wanted to play triple Ekdromoi again. This mission worked mechanically like the first, except it was only 3 consoles, one in the center and the other two on the table edges, half way up. This time I was going second, so really had to hope he wouldn’t wipe out my orders. I started with EVO Overclock up to slow him down a bit, though he still killed both of my flash pulse bots in short order. After his initial attack, I was able to drop into great positions to take advantage of the table. At one point my Ekdromoi was engaged by a Bandid, which is essentially a single dice roll off (not fun), and my Chain Rifle Ekdromoi took out his very important WIldcat Engineer. Jeff made a great push on the table, having activated two consoles and controlled them both by the start of my third turn. I finished the game activating two consoles and pushing him off one as well, giving me a narrow victory. 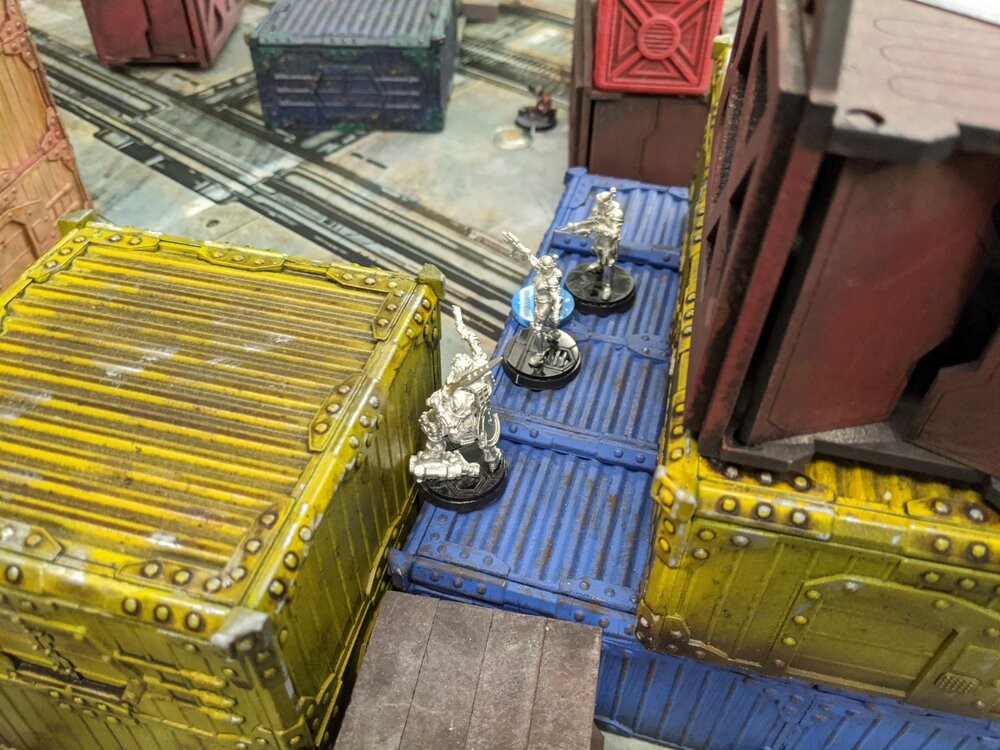 I had a ton of fun, and all my games were over incredibly quickly, the scenarios while being custom were still loads of fun, and I particularly liked the first and last ones. With two wins, a tie and a loss I finished somewhere above the middle, but wasn’t paying too much attention, I was really just there to have a good time with friends. It turned out that my playing for laughs paid off though, as I was selected by all four of my opponents as their favorite, earning me the Best Sportsmanship award, which came with some very strong beer (consumed that night) and a freaking Katar knife, which my wife uses as a toothpick.

Overall, I was incredibly impressed by my triple Ekdromoi list, despite being a joke at first, I will probably end up running this more often. Even though you start down on orders, Airborne Deployment goes a LONG way to making up for the lack of camouflage and infiltrators on the table, in a lot of ways, I’m now looking at AD as a budget mixture of Superior Infiltration and TO Camouflaged (for hidden deploy), except you get to pick during the game instead of before, so it’s like having extra models in reserve too. I think there’s a lot to be explored when it comes to AD these days…