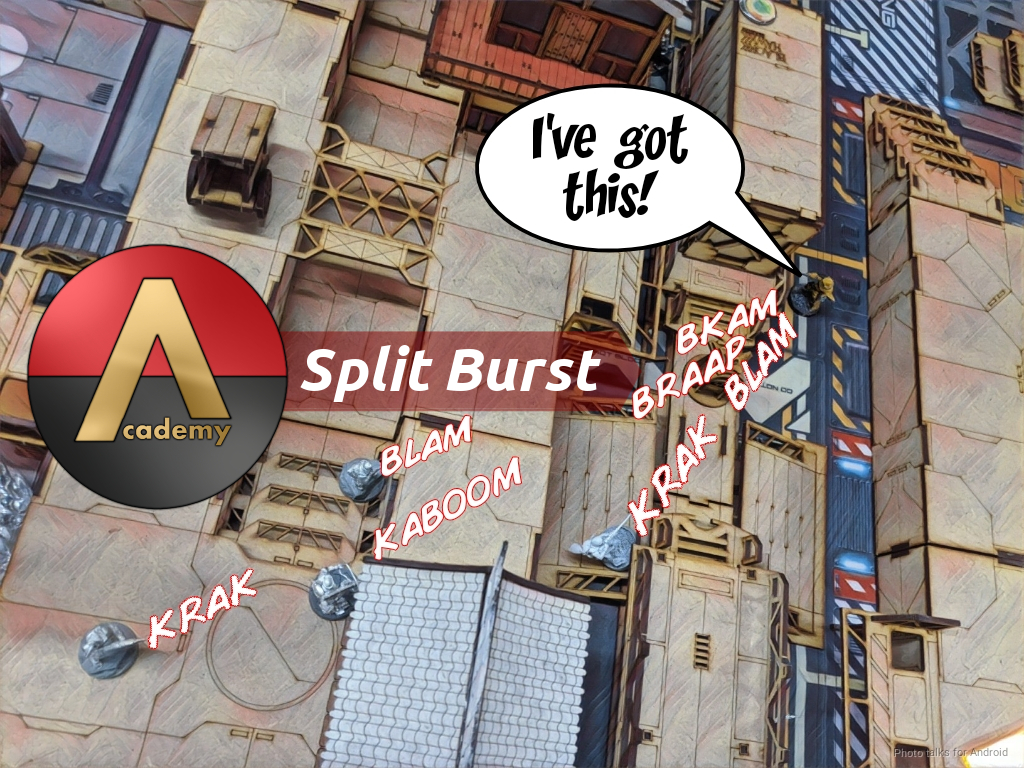 Alright. Let me present a nightmare scenario: you’ve just moved your Vet Kazak AP HMG Lieutenant into LoF of a TR bot intending to take it out…

and a TR sniper reveals and takes a shot at you!

What’s the right call here? Well, I’d say splitting burst is, surprisingly, the right call! Against the TR bot, at burst two versus its burst four, we have the following odds:

Against the Lynx, our burst two versus its burst one, the odds look like this:

Now, some of you might say that this is an engineered scenario. Well, it happened to me in a live game:

Everything the Light Touches

There are a lot of caveats here, as is the case with basically anything in Infinity. We’ll discuss that more in a moment. There are a few reasons to split burst:

The key takeaway here is to make you re-evaluate the adage “Burst is King” when playing games of Infinity. It’s an excellent “rule” to remember, but the path to mastery is paved with carefully broken rules.

Since it’s often difficult to organically find yourself in a position where splitting burst is useful, feel free to play a mission with a saturation zone like Power Pack.

Split your burst in the active turn (because it’s the only legal way to do so) in a game, and write in with how it went! You don’t have to write up a whole battle report, but if you choose to do so, please use the following template and share your report with [email protected].

If you’re not writing a battle report, that’s fine! Just send in your thoughts to the above email. What I really want to know is how, if at all, splitting burst has changed your playstyle and if it’s a tool that you’ll leverage later!

As always, I’ll randomly select a respondent to win either a in-print blister of their choice or a Bromad Academy patch!

I’ve been finding that commentary without context has been progressively less and less useful to me in improving my Infinity game. To address this, I’m going to present a few games where splitting burst was relevant to the outcome of the game.

I’ll provide a little bit of color commentary but in general I’ll try to let the games speak for themselves.

Everything the Light Touches

This is the game from the intro to this mission. I used it as the initial example because it was a forced burst split. I didn’t expect to come out on top. What was surprising was that the odds were so reasonable. It of course helps that the Vet Kazak is a “2 wound” model with Mimetism, but the actual scenario is a pretty bad one–TR bot and TO sniper shooting back!

I think that the example really illustrates that splitting burst, even in such a scary situation, is viable. It also illustrates just how lethal Infinity as a game system is. Obviously you don’t want to replicate being in this situation during one of your games, but you at least have seen that you can come out the other side with a win.

The first two examples (Duroc and Vassily) I think are good examples of how to play in a mission with a Saturation Zone to get maximum utility out of orders. It helps that T2 rounds the benefit of 2-wound models, making T2 snipers (or rifles) more viable in a split-burst scenario.

I want to draw attention to Rida’s splitting burst with his Hortlak Jannisary. He could have move-dodged his way to the objective, but instead chose to throw a single die back at multiple AROs (who were also on single burst, of course). The odds in each individual rolloff are pretty similar to what they would have been if he had attempted to dodge, but the benefit of splitting burst is twofold:

Definitely worth thinking about if you’re using something very survivable like a TAG with high ARM, burst, and multiple wounds or structure!

Journey Towards the Dark Side

Speaking of TAGs, above is an example of me using an Uhlan to fight my way through a Djanbazan and a Mutt. It’s a really dangerous situation, especially with a Mutt so close to my TAG, but splitting burst got me there.

I actually did the crazy thing and split burst the first time with the Feuerbach, hoping to outright kill the Mutt instead of having to put it dogged. Thankfully, that worked out, even though I lost the face to face against the Djanbazan. Once I could focus all my burst on the Djanbazan, four dice was definitely better than 2, especially since I could move the Uhlan forward to get the Djanbazan out of cover. I’m still on -3 because I’m closer, but at least the Djanbazan didn’t get an ARM bonus from cover.

Sometimes you can really dish out some punishment, like if you’re a Hac Tao firing at stuff from their bad ranges in cover. If you can basically zero out your opponents, you can split burst all day!

It may seem flippant, but if you look at my list I don’t have much in the way of heavy hitters aside from the Yan Huo, Hac Tao, and the Tiger Soldier. Everything else is basically a warband or a support piece. I really needed to be mobile to get objectives flipped, and the Hac Tao was the only useful piece that enabled me to go where I needed to. At that point in the game orders mattered, and I really needed to just get some AROs negated, either by smoke or by liberal application of shock rounds so splitting burst was quite relevant.

This list of examples wouldn’t be complete without a Kriza HMG splitting burst. I love Krizas. There’s nothing quite like rolling out into the open with your Lieutenant order and gunning down two models. Amazing.