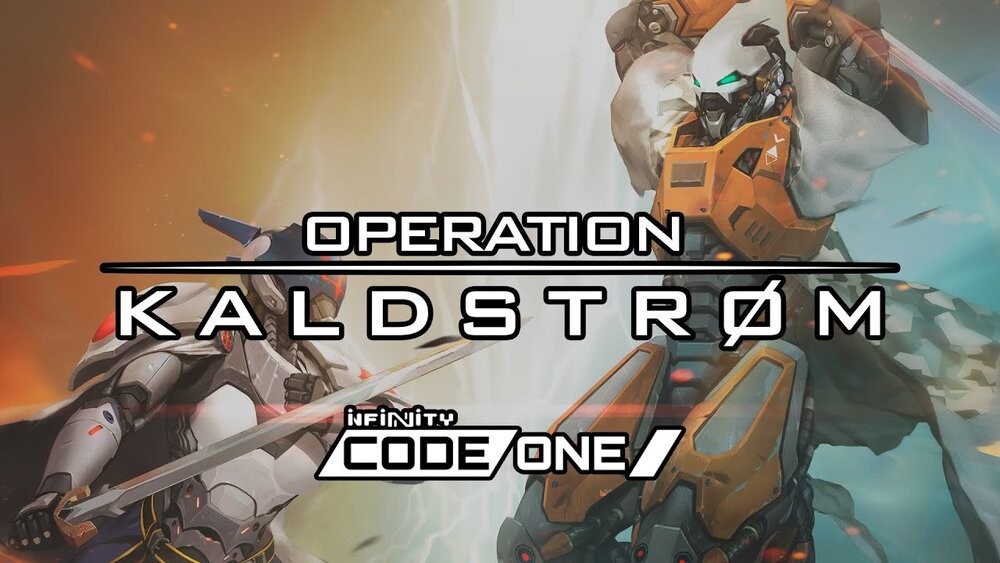 Sorry it’s been a while, with the Rose City Raid being cancelled and all the other craziness going on in the world, I just haven’t had the time or inspiration to really sit down and write. Fortunately, Jon was there to help get me out of the funk and we played a remote game of the new Code One rules.

For those who aren’t familiar, Code One is a streamlined set of Infinity rules, designed to help get new players up and running with Infinity. They’re based on the upcoming N4 (4th edition) Infinity rules, with some simplifications for ease of play. Furthermore, the army choice is fairly restricted compared to the full rules, which makes building a list both easier for new players, and an interesting challenge for veteran players.

Kicking off Code One is Operation Kaldstrøm. I did an unboxing live stream on Twitch, if you’re interested, but overall, I think it is an incredibly strong product. The miniatures are every bit as gorgeous as you expect from Corvus Belli, and the new heavy card stock terrain is fantastic, though a little finicky to assemble. The two forces that come in the set are varied and interesting, leaning heavily into the Camouflage game with Yu Jing, while the PanOceania army brings a diverse range of capabilities. One thing I love in particular is that it comes with nice card stock templates, tokens and silhouettes, which is often a hurdle for new players to get their hands on.

Getting any games in during this pandemic is a challenge, though Jon has been hard at work facilitating playing games the best he can. While some players prefer Tabletop Simulator, I have been playing games with Jon, via camera, on his game table, which has it’s own unique challenges. You can watch our full game in the video below. While I wont go over the entire game in detail, it’s worth noting that while playing in an extremely awkward manner, over video chat with Jon moving all the miniatures, that we still finished a 30-point game (about 300 normal points), both playing new armies for the first time, in about 2 hours. The last hour or so of this video includes our in-depth post-game analysis, well worth a listen to if you’re curious about the changes in action.

This is what you really came here for, and perhaps the most important part is what we thought after the game. First of all, as I mentioned above, we played remote, over camera, with new armies, at the full size, and got done in almost exactly 2 hours. Our usual games of Infinity are about 1.5-2 hours, but playing with all these changes, looking up rules, profiles, and the handicap of remote play, we still kept it in our normal game length. That’s a pretty big deal.

The first thing we noticed was well before we played the game, but when we were preparing. Jon and I decided to play 30 points, which is the rough equivalent to 300 points in Infinity. When you translate our armies over to N3 points though, we were both well over 350 points each. Most of the missions in Code One still require you to have specialists, so you’re going to have to keep that in mind when you make lists, and many of the easy options, like Forward Observers and Paramedics are not present.

Armies in Code One are restricted to a single combat group, so as you go up in points, not only will you get more models on the table, but the respective power level of each will go up as well. When I made my list for the game with Jon, I included a Jujak, basically as a cheerleader, because I had 2 points left after picking the other troops I wanted. This is a bit weird compared to making lists for regular Infinity. Moving forward though, we’re likely going to keep it to 15 and 25 point games, 30 just feels like you’re not having to make any tactical choices, and really just take all the things you want.

With the restricted profiles, you’re often going to be taking more hackers than usual to fulfill the specialist requirements. While Hacking is EXTREMELY streamlined in Code One, the programs your hackers (which are all the same type) use, have some very important distinctions from their N3 counterparts. There are two programs that all Hackers have in Code One: Carbonite and Spotlight.

Carbonite seems the same at first, but it can be used against anything Hackable, not just HI/TAG/REM, which makes it really handy against enemy hackers. Spotlight went through the biggest changes though, it can be used against anything (like before), but no longer confers the -3 WIP penalty to use, and can be used as an ARO. Losing the -3 penalty was a welcome change, but using Spotlight as an ARO is MASSIVE. Any enemy that walks through the ZoC of a hacker is going to end up being easier to shoot at later. It gets better though, Targeted has changed quite a bit, giving a +3 mod to BS Attack, but also Comms Attacks and Hacking, woah. But wait, it gets better, to clear Targeted, the model has to pass a Reset with a -3 WIP penalty, which can be a F2F roll if the enemy does something like Carbonites you at the same time, and it no longer automatically goes away at the end of the turn. Yeah, Forward Observers are going to be beastly come N4, but in the mean time, Spotlight is an incredibly powerful tool to use in Code One.

Funny enough, this was probably the biggest change demanded by the community, and had the least noticeable impact on our game. Critical hits still happened, and models took and passed or failed their saves. Models which were crit still seemed to go down, more or less like before, and if we passed a few saves we wouldn’t have had before, it went unnoticed. In retrospect, I think there were a few things at play, the first being that nobody plans on being crit to begin with, so if you suffer a critical ARO and pass the saves, you still wasted the order, but the order still went mostly to plan, so you may not really dwell on it. It will however change some of my decision making. It’s no longer a 100% guarantee that my W2/Dogged/NWI model will survive an unopposed ARO if I choose to use a direct template weapon, which I often rely on with my Steel Phalanx. It’s probably an over-stated risk, but it’s now a risk when there was none before, and also makes risking it against B2 ARO slightly worse as well. I don’t think Jon or I came out with a strong opinion of the new Critical Hit rule, it’s not good and not bad, just different, we were fine with it before, and fine with it now.

So what now? Code One is here, and it’s a good product overall, though I definitely prefer the full rules of the game for the added tactical decision making. That said, I think that there is a place for Code One, but it may not be what Corvus Belli intended. Aside from being a fantastic teaching tool and replacement for Recon+, Jon and I agree that Code One will be perfect for a speed-chess analog. Playing 15 points in 15 minutes (per player) is our next goal, blasting through games in a half hour, dealing with speed-induced tactical errors and recovering before counter-attacking. We also want to get a game in at 25 points to see what it feels like with a little pressure on list building. 30 point games for me however, will be relegated to playing with a new player once they’ve assembled their full Action Pack, but aren’t ready for the full game.