So this time I managed to squeeze in 3 games using both Red Fury Taskmaster and HMG Kriza Borac as Lieutenant.

(I think the last model was Bran Do Castro that failed his Infiltration roll and was not used during the game at all, but I’m not 100% sure)

First game happened vs Ramah Taskforce in Quadrant Control mission. On the first turn I used Uberfallkommando with Taskmaster to attack left flank to get rid of TR Remote that was blocking my Riot Grrls Fireteam.

So first off Chimera threw 2 Eclipse Grenades to allow Taskmaster to get inside 16” range from enemy HRL Khawarij in Haris Fireteam. I think my Taskmaster got hit once by the HRL, but then killed the Khawarij. 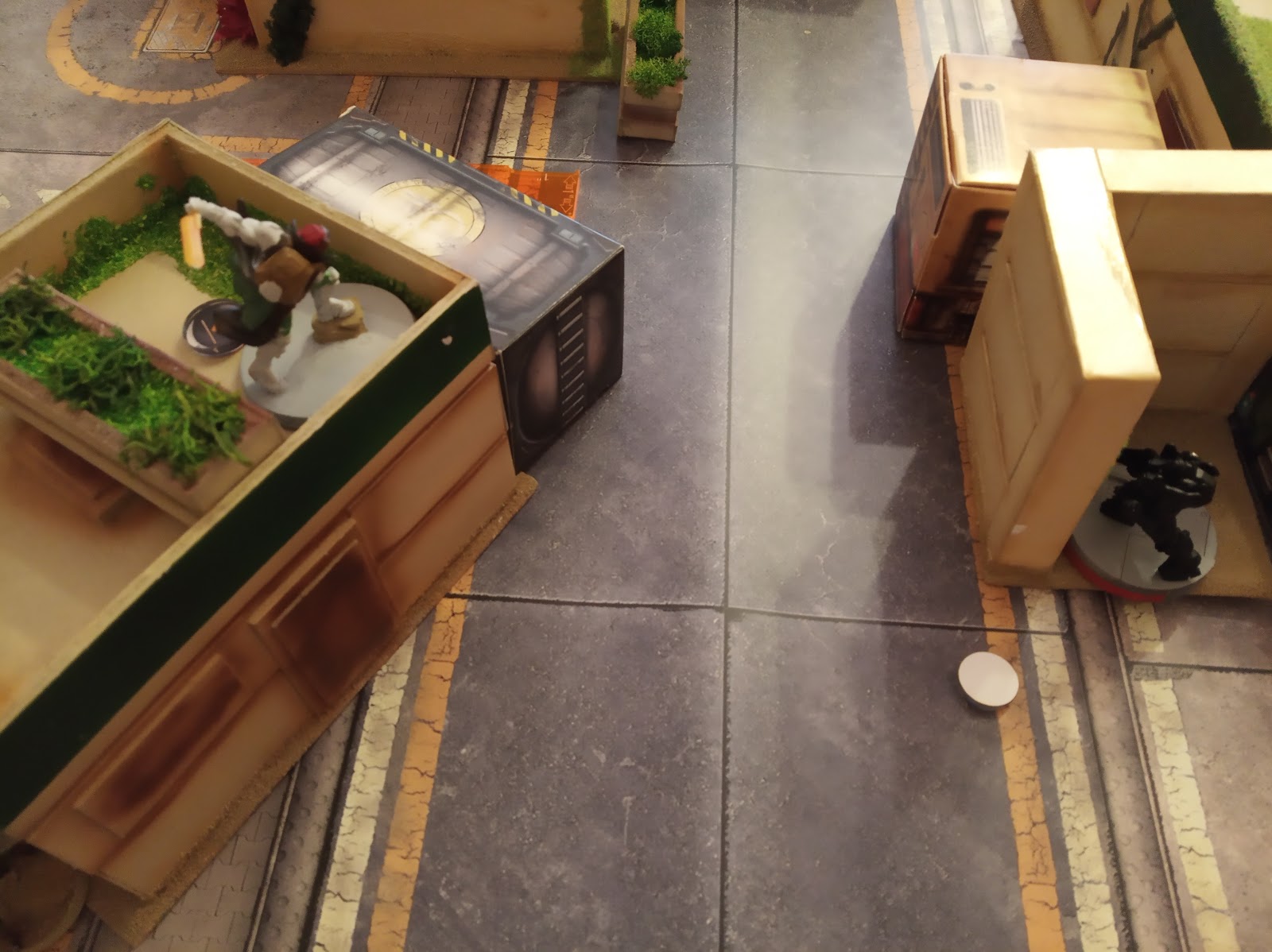 The rest was pretty straightforward.
Ghulam sniper died to my Riot Grrl with a Missile Launcher. Nahab popped out near my DZ, killed of Chimera and hid beneath my Daktari that was my Data Tracker. 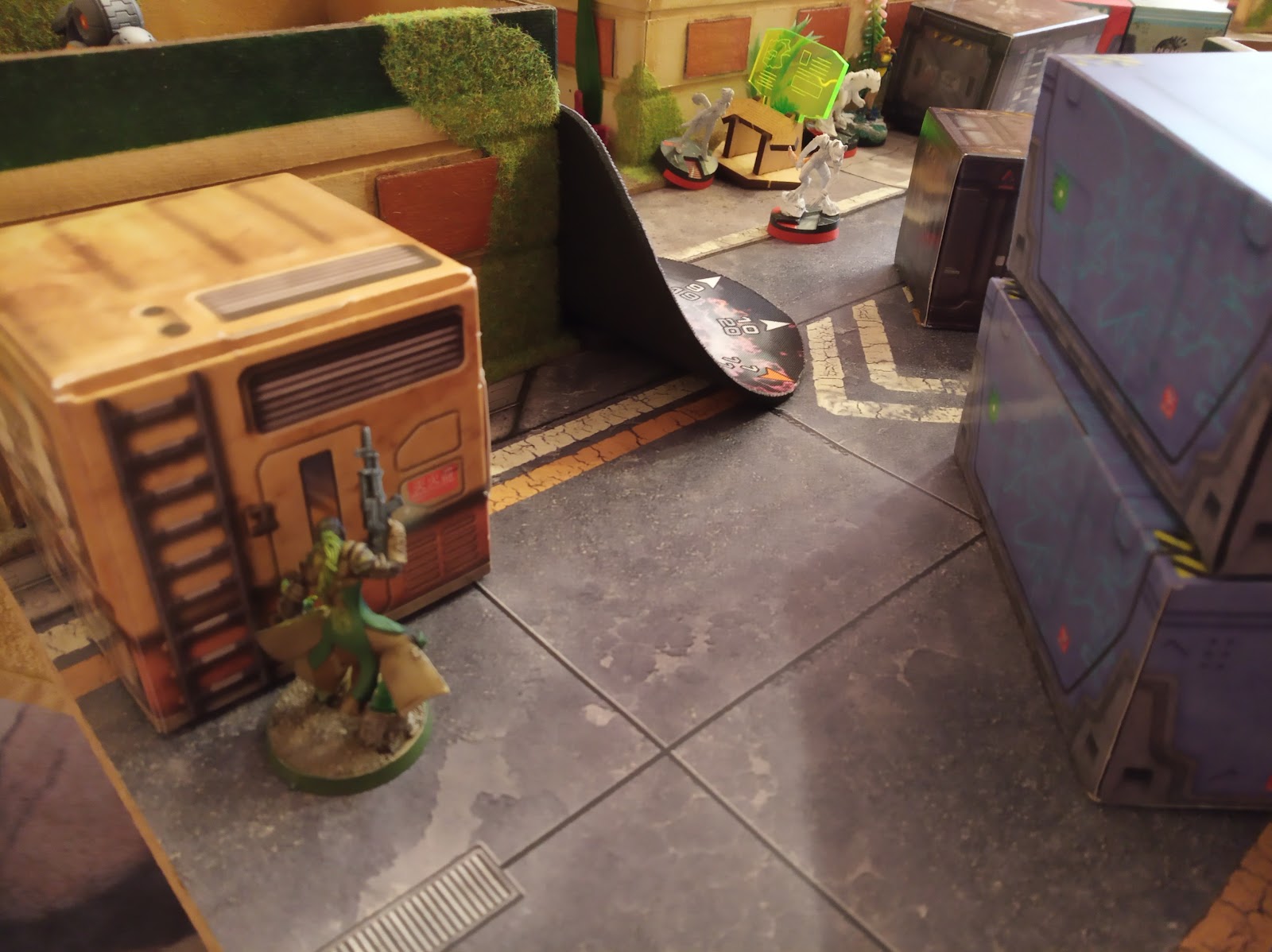 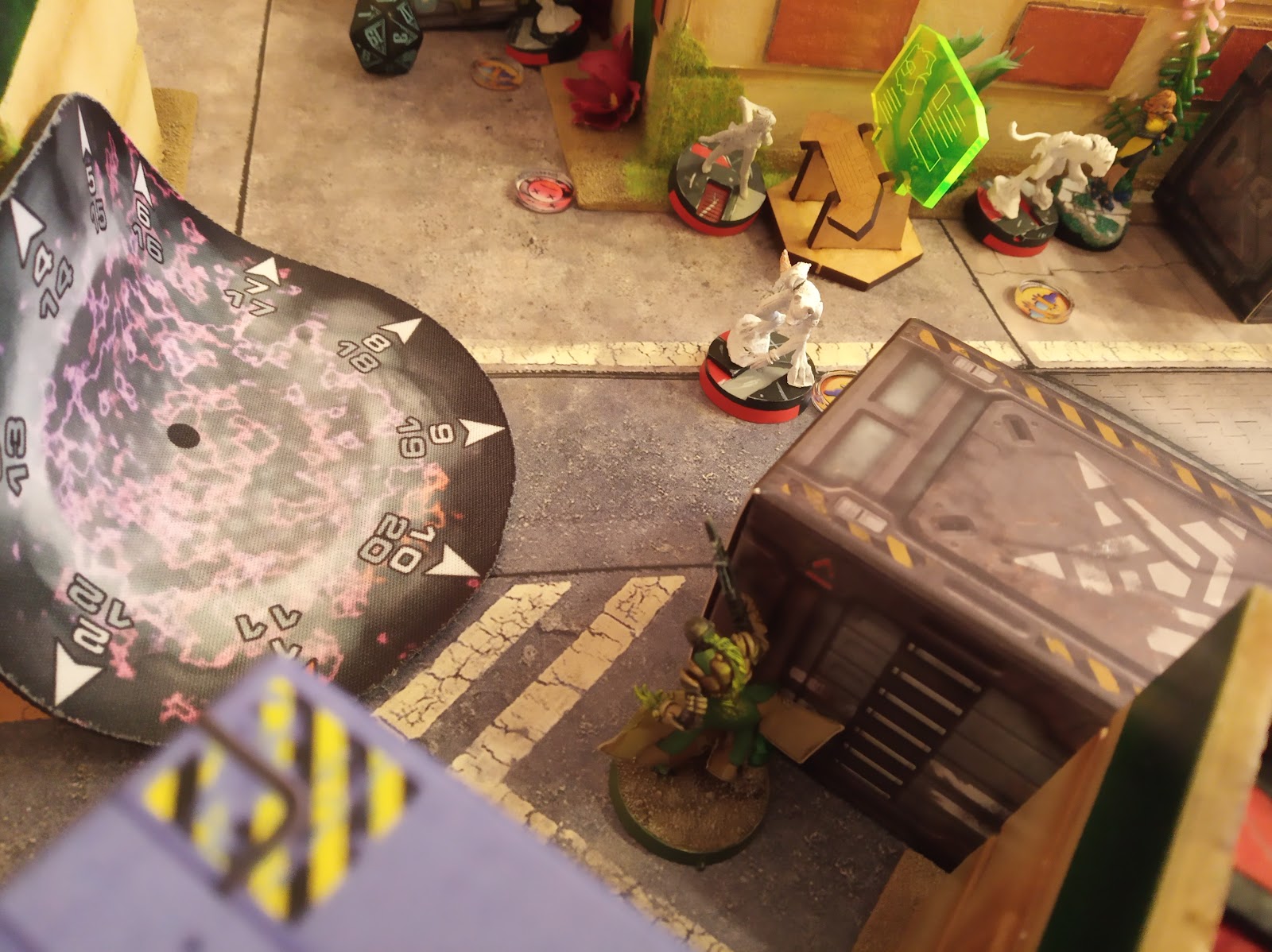 Next up was TR Remote. Once shoot off and it was done. Then Taskmaster entered Suppressive Fire to hold Tarik where he stood.
Too bad I didn’t know that he has some grenades up there with him. Two Lt orders from Tarik on his turn and I’m missing my Lt.

Being in LoL I had to figure out what I want to do and do it effectively. At the time it was 3-0 for my opponent. Daktari used her Irr and DT orders to stand up, miss the Nahab and lay down while knocking him Unconscious. One problem out of the way.

Riot Grrls FT:Core used 3 CTs to move forward a bit while taking shots with ML at different enemy models. I think with those shots my enemy lost his Mk12 Khawarij and one of the Ghulams. 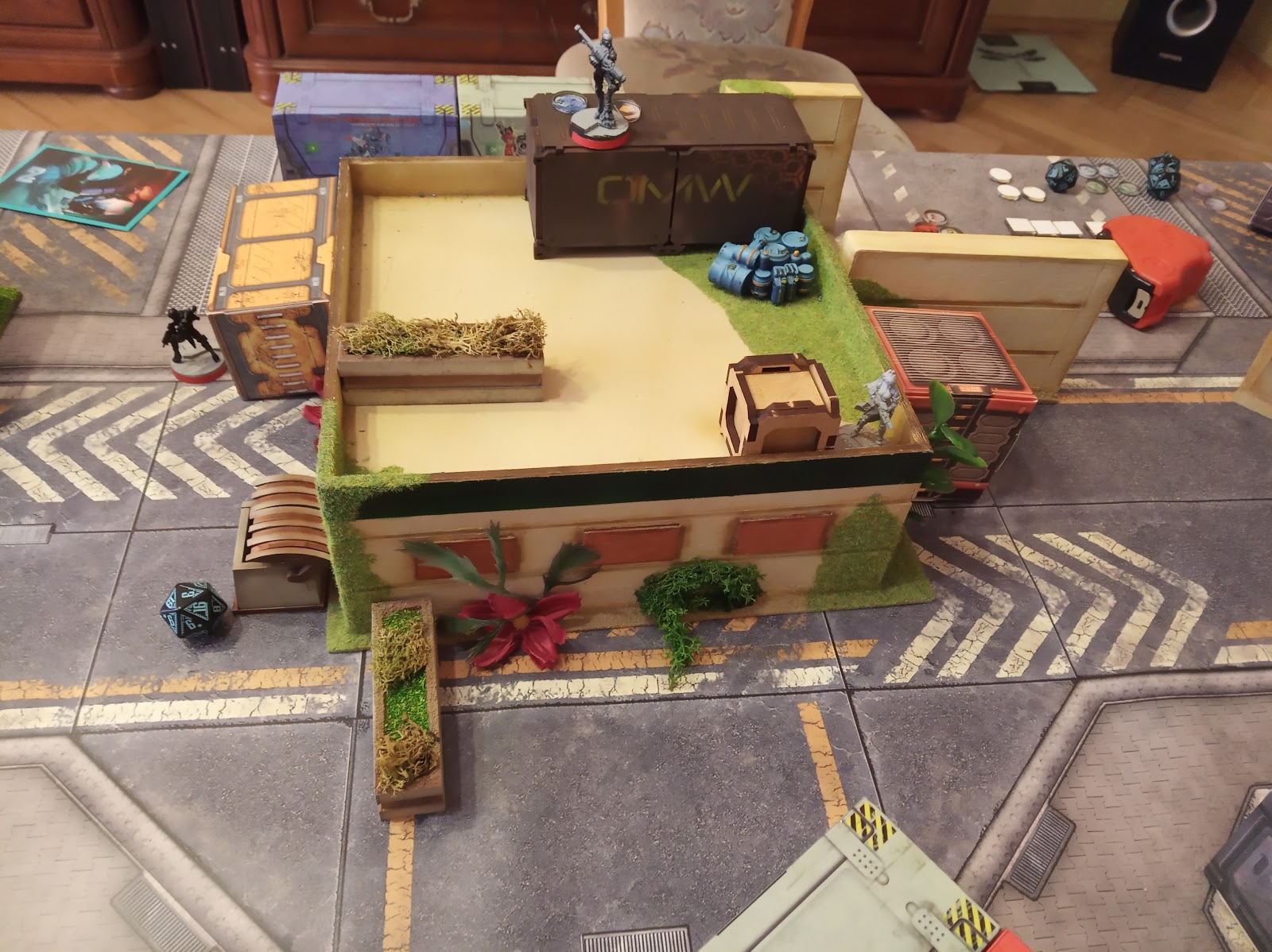 Zero Minelayer on my right flank moved up a bit to take better cover before he gets taken out by Ghulams. 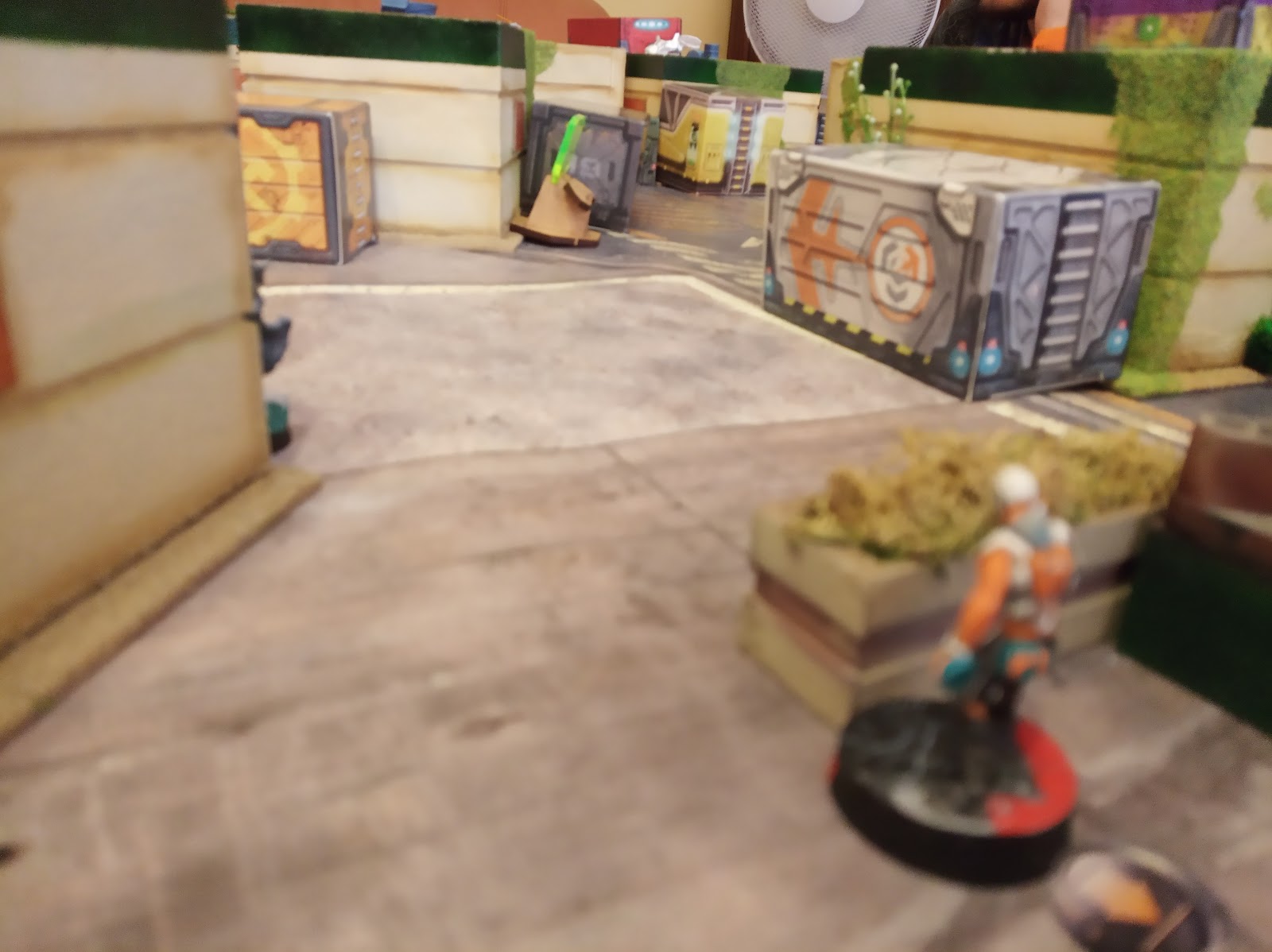 Ramah on its turn moved NCO Khawarij into a corner and moved remaining Ghulams with Naffatuns forward to take out my Zero. Luckily I managed Dodge out of his LGL shots so we were even on zones and the score went up to 5-2 for Ramah.

On my 3rd turn I started cleaning the table. And by that I mean swiping it white clean with Riot Grrls. MR Riot Grrl was my new Lt. Fireteam moved up in the middle of the table, one of the BS Riot Grrls got stunned, but the rest took out FP Remote, remaining Khawarij, and 2 out of 3 remaining enemy Ghulam Fireteam members. Then MR Riot Grrl went into SF Mode with her Lt Order and the last one with Combi finished of the remaining Ghulam (or at least held him back). At that point I think Tarik must have been lost on my 2nd turn to my Riot Grrl with ML, because he didn’t have enough orders (maybe up to two?) during his 3rd round. That left us with me controlling more zones and I have accomplished Secure HVT tallying up the score at 6-5 for Bakunin.

So this one I treated as a training before a League game that is going to be the 3rd game.

(I think im missing a lot, but the idea was around Janissary core with Leila, Ghulam NCO with smoke LGL and Red Fury Mukhtar as a duo, Tuareg Doctor in the middle that succeeded at his Infiltration Roll and a Nahab).

Sin-Eater failed his FD1, so he didn’t have a perfect angle. Moran and Zero also failed his roll. Only Bran managed to get out of my DZ. Puppetmaster, Daktari, Clockmaker and Moran were set up to get out of Biotechvore zone in 2 coordinated orders together. So were set up Kriza, Hollow-Man and a Zero and the dragged SIn-Eater a bit forward with them.

Zondnautica and Morlocks got out in their Impetuous orders. As mentioned above Moran with Daktari, Clockmaker and Puppetmaster got out of biotech zone safely. So did Kriza with his pack. Having that out of the way I attacked with Kriza. He managed to get an angle at Janissary with ML when Tuareg showed up. I managed to survive, fell back a bit and took out Tuareg with my Hollow-Man.

Zondnautica got up closer to the action and out of harm.

During Ramah’s turn Ghulam NCO managed to place down smoke in his 2nd order, Mukhtar got into position and decided to take shots at Kriza. 2 Orders later Kriza is safe and with 1 wound lost (I think) and Hollow-Man is down. At this point we realised that Ramah player misunderstood the scenario (to be fair it was first Biotechvore game for him and he’s a fairly new player) and he thought that he is safe in his DZ, hence the defensive Janissary fireteam. With remaining Orders he took them down the middle of the table and digged in there.

On my 2nd turn I used Zero to take out Mukhtar (mine tricks).

Then I used Zondnautica to attack enemy Fireteam. Zondmate close up and personal, while Zondnaut took Spitfire burst out on enemy sniper. Effectively I lost Zondnautica and enemy was left with one of the Janissaries at 1 Wound. Then I managed to accomplish one of the Classified Objectives.

From Ramah’s 2nd turn I remember Nahab KHD popping out behind my Zero and taking him out that was later taken out by Kriza’s Heavy Pistol B3 quite effectively.

(I lost more than 50 points and my enemy did only 1 Classified Objective).

So this is the fresh one. For me it’s exactly the same list that I used in Game 2, but in a different location and against Varuna.

After 2 rerolls I managed to win the Initiative Roll and decided to choose sides. I saw there’s one decent spot for my Sin-Eater and that sold me on the idea.

Moran and Sin-eater managed to infiltrate, while Zero and Bran failed.

Varuna started by letting MSR Kamau shoot at Sin-Eater. At 39” Sin-Eater had barely any chance and got insta killed (yep, I thought he would be inside 32”, big misplay by me). Bulleteer did Move-Move into range of one CrazyKoala and got damaged. Then Patsy’s Haris went into the middle and into total cover, 2nd group got coordinated twice out of bitoechvore zone and MSR Kamau Fireteam got out of the zone and onto a building that was partially out of the biotechvore zone risking that some of them might be still inside the zone. Lastly two camos tried to escape as well, but one of them did only 4-4 and got gibbed. Turned out to be Helot with LRL.

Varuna lost Trauma-Doc with her Palbot, Helot and 2 out of 3 Fusiliers that were in the zone (Hacker/Fireteam Leader included).

My favorite version of Morlock, the 8-4MOV one get killed by Kamau.

My Kriza stands up and takes shots at Kamau sniper. Kamau gets hit but managed to survive and keep standing despite ongoing fire. With Lt Order Kriza takes shots again, this time putting end to Kamau’s life. I make 2 Coordinated Orders getting Daktari, Hollow-Man, Clockmaker and Bran out of the Zone (turned out that Clockmaker didnt get out completely) and then another Coordinated to pull Kriza, Zero and Puppetmaster forward. Visibly they all are still inside the biotechvore zone so I use 2 more orders on Kriza to put him in total cover from enemy Camo Marker that was out in the open and didn’t react (the one that moved) and switched to Suppressive Fire. Zondnautica moved forward into the middle, took out Fugazi, Machinist and got isolated by Zulu near the Fugazi. Then with last order Bran took out the Zulu.

Puppetmaster survived BTS roll at 12 (bless 3 BTS on that model), but Zero and Clockmaker didn’t have similar luck.

Varuna started their 2nd turn with only 6 orders and NOT in LoL (so luckily the Lt survived the biotechvore zone on top of the building). Zulu Cobra near my Kriza used 4 (sic!) to get closer to Kriza and successfully jamm him (failed Jammer rolls and won Reset FtFs) and then used the remaining 2 Orders (3 including NCO order from Patsy) to take Fusilier remaining in the zone out of the harm’s way and take better cover in the middle and take a shot with HRL at my Bran. Luckily Bran managed to dodge out while Hollow-Man only took 1 hit to his STR value.

Loss of Lieutenant for me. I was hoping that wouldn’t happen but that wasn’t all bad. Zondnautica held her Impetuous Order, while Morlock came closer to the action and in his (her?) Irregular order completed Extreme Prejudice on Fugazi. Moran took out Zulu Cobra near Kriza. Kriza took out one of the Fusiliers at the roof that came too close to the edge. Then Zondnautica made her move, let the Zondmate rush towards Patsy while sitting at the corner herself. She exchanged a burst with Kamau’s SMG, while Zondmate took a Chain Rifle shot at the whole Haris and got knocked out by their fire. Patsy took a wound and HRL Kamau got killed. Daktari tried to heal the Clockmaker but accidentally (as always) killed him. Bran and Hollow-Man moved forward into better positions. At the end I have designated Moran my new Lt and my Puppetmaster died in the Biotechvore zone.

Patsy took matters into her hands. She killed Zondnautica and moved into the middle of the table while HMG Kamau moved a bit back. Patsy managed to Net-Undermine my side of the table and finished her turn in there.

I already had more points killed than my opponent, but I wanted to complete my Objectives which were Predator and some other that I couldn’t accomplish. But I still had Bran, right? So, Moran used his Lt Order to take a shot at Patsy, but she survived and hid. Too bad. Bran decided to take a shot at HMG Kamau but got knocked out. That was starting to look really bad. Hollow-Man took a shot at Kamau, but he survived and hid in Total Cover. Fair enough, I still had 2 Orders and 2 Unconscious troopers in my Hollow-Mans range. Got into CC with Machinist but missed him… Still not everything was lost since HVT wasn’t far and there was a Patsy near mine. Move towards enemy HVT and a full Burst of AP round into Patsy’s back. Took a kill on her saving my HVT and managed to control enemy’s.

so a chunky 3 TP in the local League.

I don’t really like running aggressive Lieutenants in Nomads. Especially since we’ve lost Chain of Command as a Spec-Ops option with the update to their loadouts. I really like some of the options, but usually I consider them too risky. Tough having 12 Orders on Cassandra Kusanagi back in season 9 after one of the events (when she was chosen as Data Tracker she had a bonus DT Order, the way it works now in some missions for every DT) was really nice and was making up for her 4-2 MOV. I’m happy that this month’s mission pushed me into using those lieutenants and actually have some fun with them.

As we can see it’s super risky to run those Lt’s, even with with W2 and high ARM/BTS values they are and will be targeted by you opponent and you can’t overextend them too much if you don’t want to be in trouble (like I was in game 1 and 3). On the other hand you have extra resource to use and put them in safer position and, what I noticed during game 3, you might push your opponent into bad decision. I’m not sure if those 4 orders he used to Isolate my Kriza during round 2 couldn’t have been used better. Having 4 Orders to deal with Zondnautica, Hollow-man and Bran? I would seriously reconsider Zulu-Cobra move knowing what they were planning for their next turn.