Short Preface: As my friend and I do not play too regularly we prefer 200 points games for now. For this reason we took a mission from Recon+ but we decided not to use the other regulations.

I won the roll and decided to go second as it can be benefical for the mission. Luckily IA does not impose the same alpha strike threat with just 200 points (at least I believe).

I never played Tohaa or SC before and didn‘t know much about the armies at all. Hence I wanted to try all those tools that sound fun! As fireteams I decided to stick to a single triad consisting of Kaeltar, Kriigel and Taagma sniper.

I was not suprised to see two fireteams, but might have not been a good decision for the mission. The Fireteams were formed as Zuyong haris with Qiang Gao and Lei Gong and a Core of Zhanshis with Shangji

My enemy devided his force, placing the core on the right and the haris on the left as the mission is about quadrant controll. The warcor is on a rooftop where he can see a lot (I don‘t remember which zhanshis where specialists, but it didn‘t matter).

I had some trouble to find proper cover in my DZ, that‘s why everything kept pretty close to the back edge. The Diplomat and Warcor were my long range AROs, The Taagma Sniper could see in the lower left corner of the central big building, the Helot (camo) could see the upper left corner of the same build. Kerail should attack on the top half, why keel-Saan was supposed to take the bottom half. The traid could help if need be with varios tools, the chaksa should keep in the back to fire some rockets. It turned out that it could luckily see the zentral building at the top edge. The Clipsos was supposed to do what infiltrating specialists do best: push buttons and maybe get something in the Chaksas target. 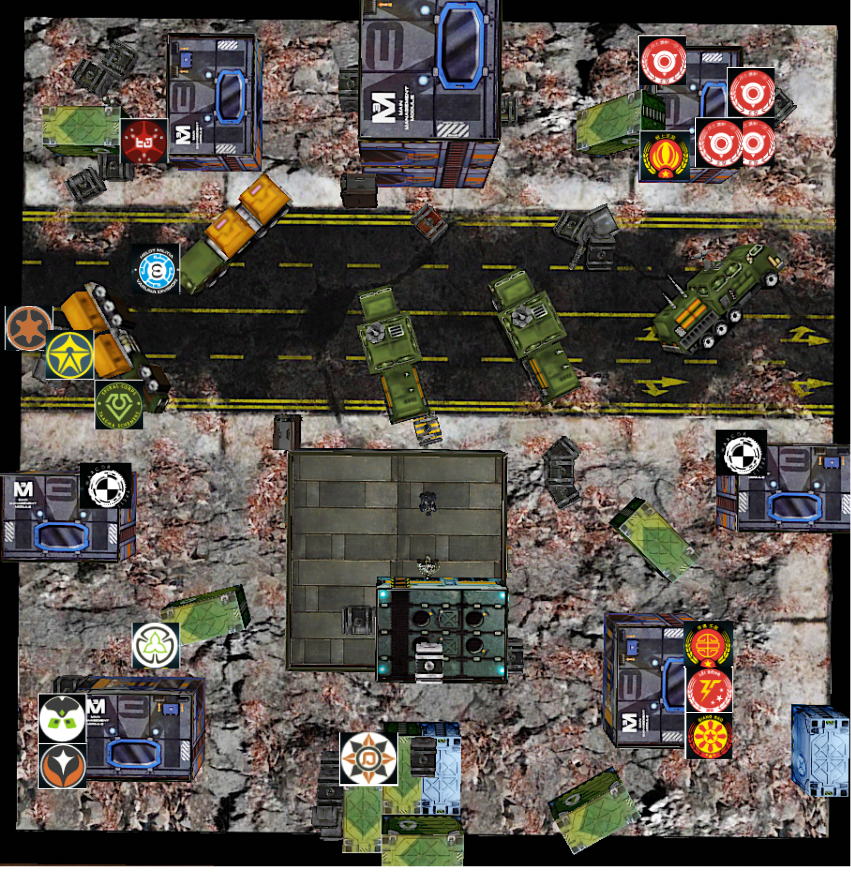 First things first, Qiang Gao shot the diplomat. YJ was not up for diplomacy… Then, the haris team advanced the board and I kept the Clipsos from AROs. When the team reached the upper left corner I sprung the trap: helot, taagma and warcor were firing, while the clipsos lay a mine. Splitting up burst 5 Qiang Gao did not to casulties, but got blinded and went into cover due to guts. Then, Lei Gong shot the Clipsos, but sprung the mine, wounding Qiang Gao and the Zuyong.

As this place didn‘t seem promissing, hence it was the core teams turn for now. 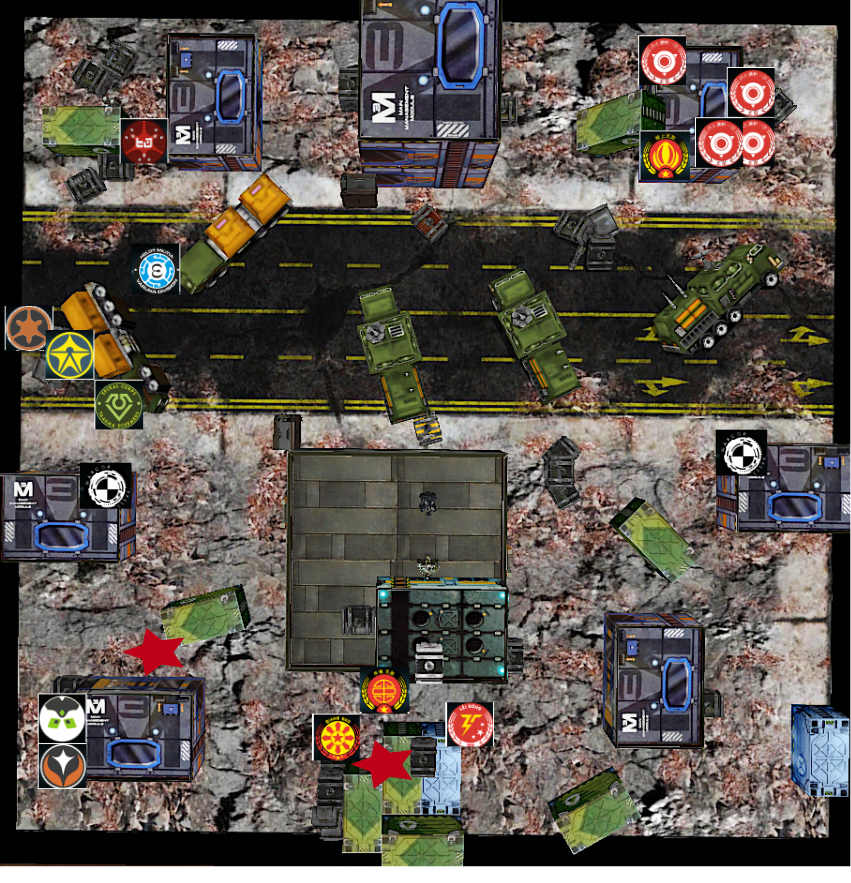 First, the shanji shot the warcor (Wrong in the pictures below). Afterwards the core team advanced taking position. 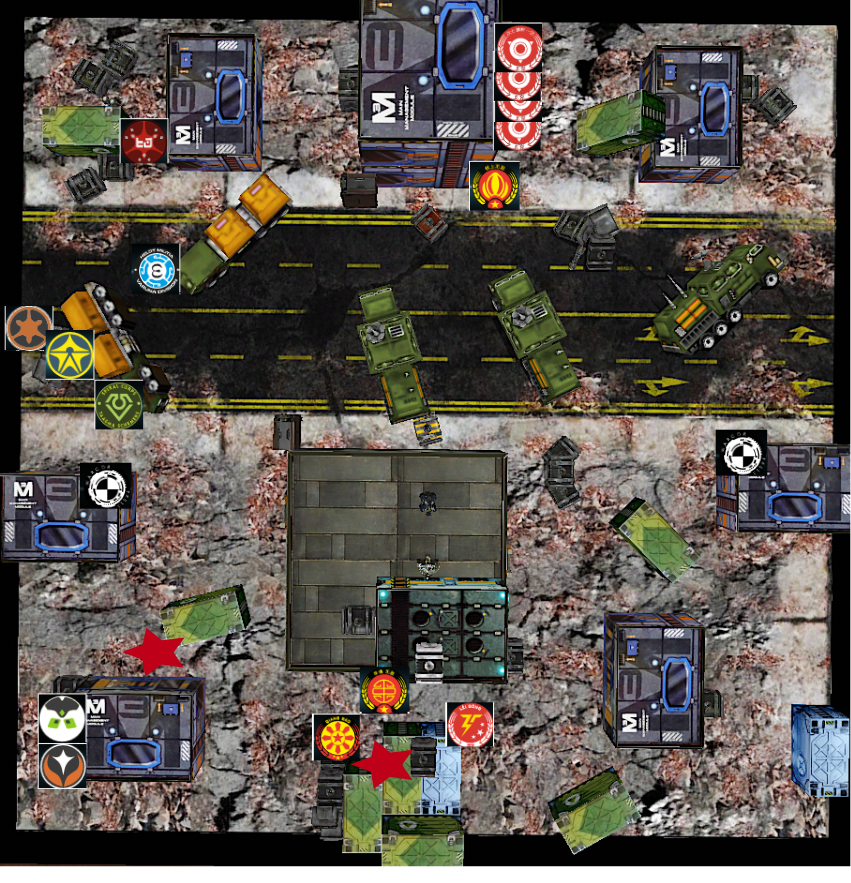 First things first: The Qiang Gao was still pretty much in the open and that Kiel-Saan was hungry. I advanced him up the board and shot the zuyong‘s captain. Next, the zuyong was to be shot but it took a couple of orders. Altogether this took too many orders to hunt for Lei Gong as well. While not having much orders to spend I moved the Helot into the corner between house and truck. This turned out to be a great spot as it should keep the Core from advancing to far. 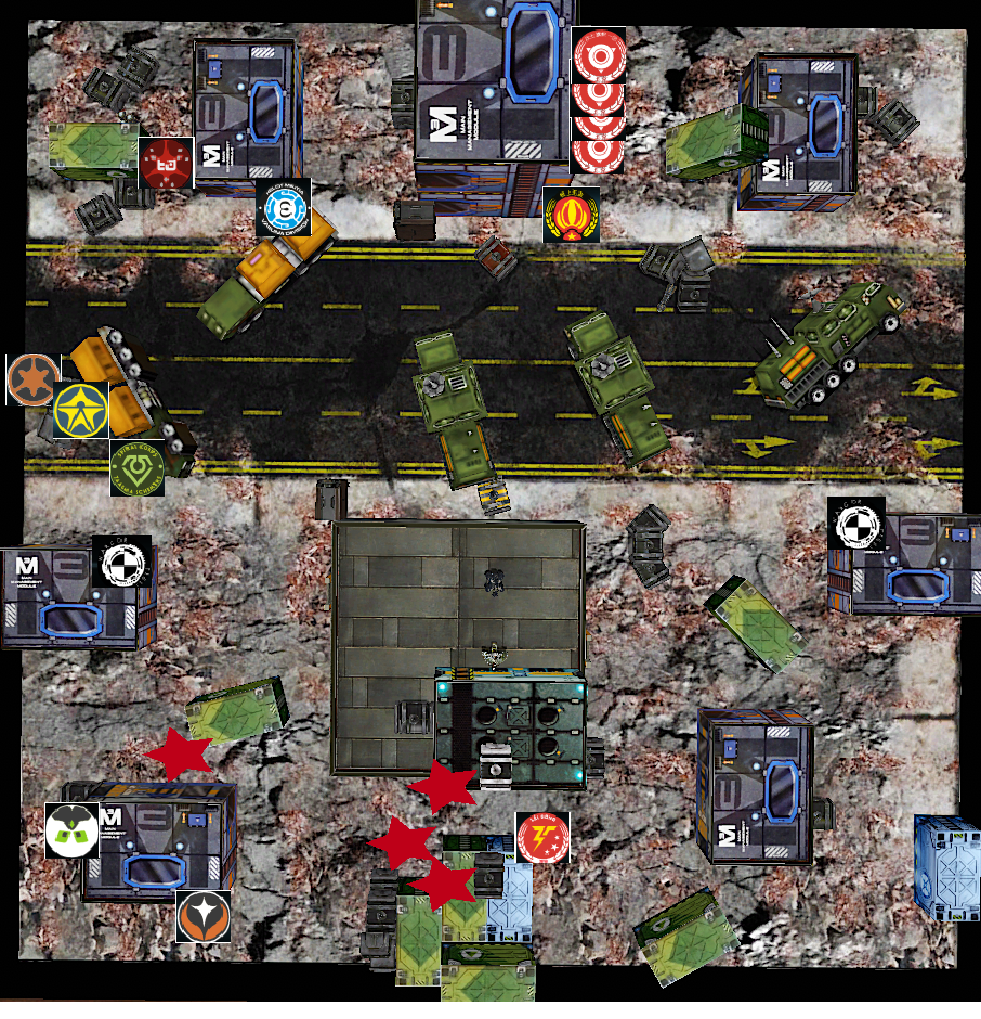 Lei Gong took the opportunity to bring down the Kiel Saan. With his SMG he brought down the Kiel-Saans symbio armor, but the mutant got away thanks to guts. Then, the core team wanted to advance further. The Shangji advanced too far and had to fight the helot and the chaksa. While Chaksa and Helot died, the Shangji took a wound and searched for cover. 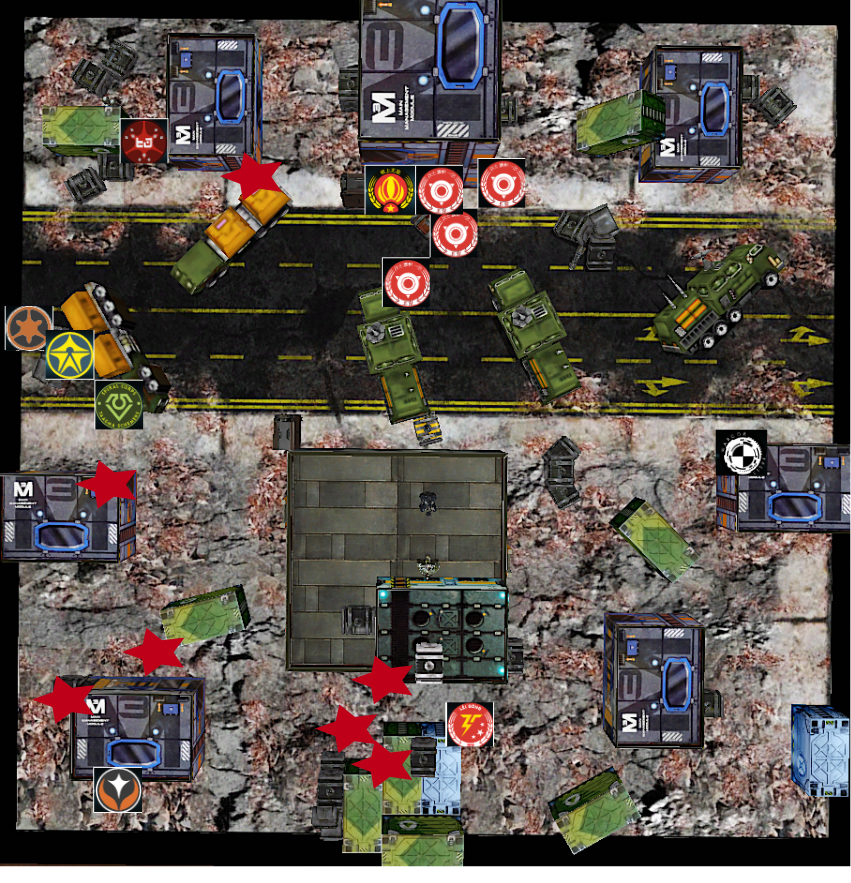 I have heard that links don‘t like templates before. Hence, The Kerail came out of his cover threw smoke to get the Surda beast close enough. Dying the the ARO fire the Surda beast killed three zhanshis with a single template. The Kerail took down the Shanji in the mean while. Finally, I advanced the board with the triad. 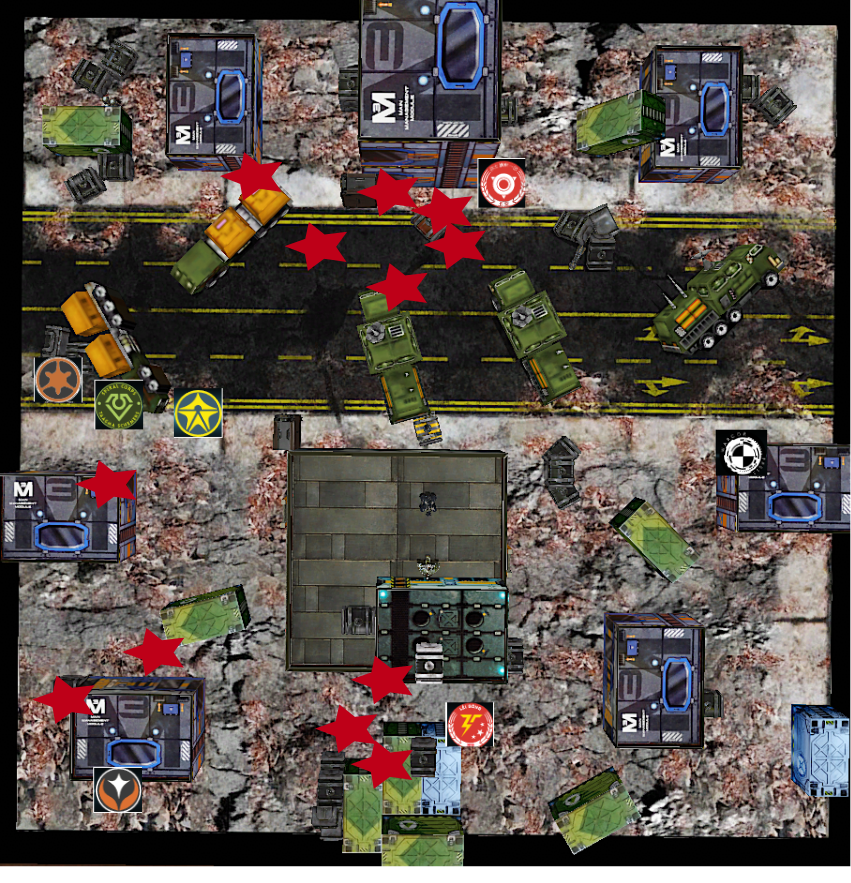 With not much orders and afraid of the triad the zhanshi tried to shoot the kriigel. Nothing happened.

The Kaeltar rushes forward to tap the antenna, got it on the second try. Resulting in 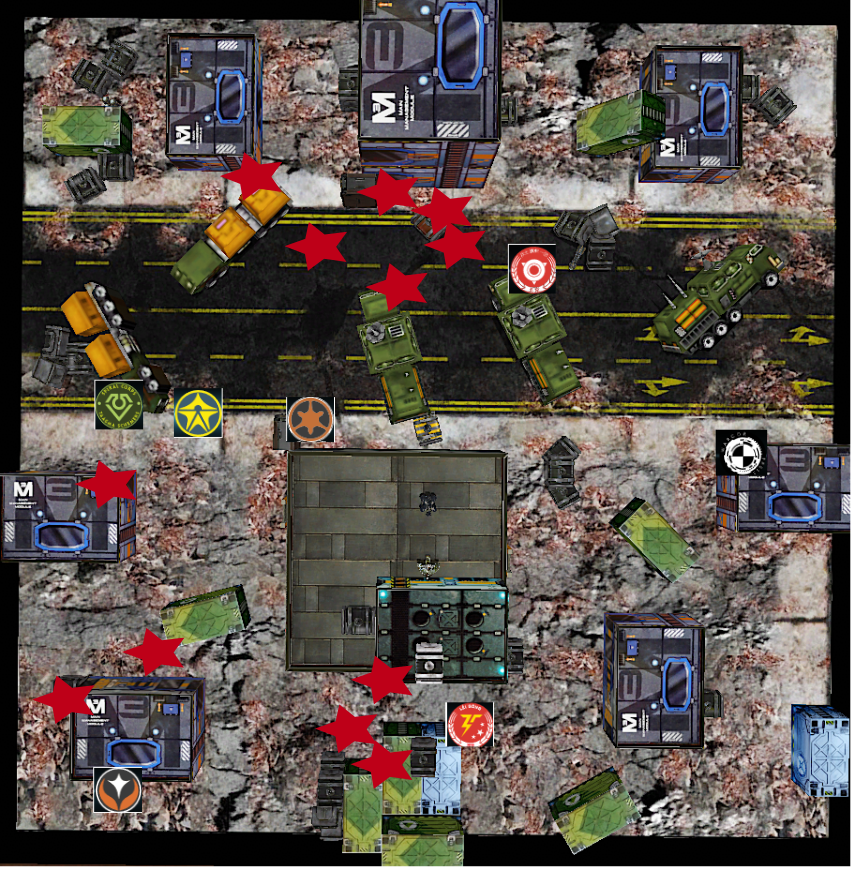 The result was pretty close, but actually I never had the feeling that I was about to loose. I always had another arrow in my quiver, always another trick not yet tried and, luckily, I‘ve done quite a good positioning for the big teams to run into traps. But coming from armies like IA or OSS I have the feeling that a quiver like that is hard to create. On the other hand, SC was missing the brute force that I like in my forces.

For the mission of course the defensive playstyle didn‘t pay out, sadly the Kiel Saan wasn‘t capable of killing that Lei Gong, as he was lieutnant after Qiang Gao died. Moreover I couldn‘t advance this flank to flag the HIV with a veteran for the classified. Luckily the Invincibles couldn‘t fullfill their classified as well (Casevac).

Altother the result seems fair and I look forward to play new (old) armies in N4.

One thought on “Battlereport (Spiral Corps vs. Invincible Army)”