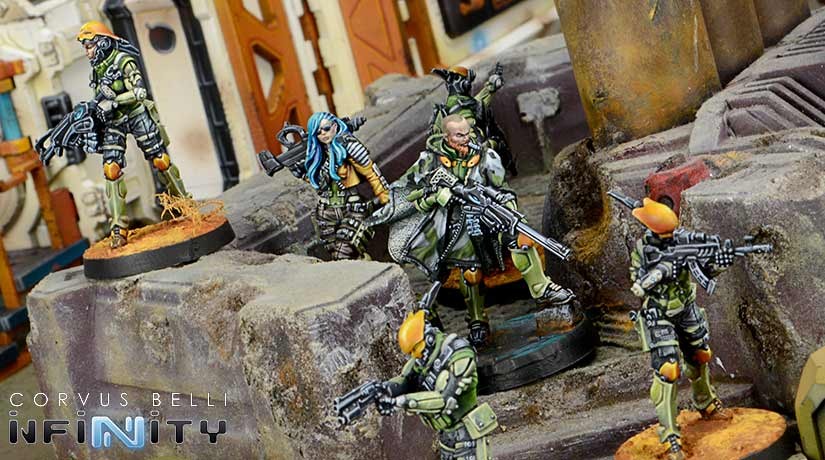 Short Preface: As my friend and I do not play too regularly we prefer 200 points games for now. We played a mission of Supplies as described in the rule book using a 48“ square map as we only found those in TTS.

I wanted to go first to set up a proper hacking game with a clipper in the back. Luckily my opponent winning the lieutenant roll left initiative for me. Actually my plan changed after deployment.

Druze were the first army that felt right for me just fluff wise. Yet I didn‘t have much games with them. As N4 changed hacking pretty much and I felt that Druze might benefit from these changes I wanted to run them. In 200 pts I prefer small teams. Hence, I went with a defensive haris team around a ABH sniper (+Clipper+lieutenant) and two duos escorting specialists (HMG+hacker and by error bulleteer+KHD, I expected to have valerya….). Sadly, to make it fit I had to exchange the peacemaker for a bulleteer and valerya for a brawler hacker. Esp. The peacemaker was missing to get the hacking game running.

My opponent had a similar idea running a hacking heavy list with two big attack pieces. Actually, if I wouldn‘t have been that remote/hacker heavy I might have had less to worry about.

As I deployed first I first dropped the sniper (got a multirifle from booty) in a shot such that he could see the upper and lower boxes and deployed his team in cover. Then, the duos took sides and the skirmishers (hunzakut&aida as well). Aida is pretty much in the open, but as I went first that was planned as she was supposed to advance aggressively (got a panzerfaust from booty). Later I figured that I didn‘t deploy properly as the gunfighters (aida & druze HMG were both on the upper half and my repeaters were mostly on the lower half (bulleteer, KHD, Hunzakut). Well, I‘m still learning.

My opponent realized that the sniper could see quite a lot of his DZ already deploying most stuff in total cover pretty far in his DZ. The Iguana came as reserve and was but in suppressive fire which pretty much shaped my first turn.

Note: In the picture below I marked the level 2 scenery with green stars, so iguana and sniper could not see each other. The red stars are the crazy coalas. 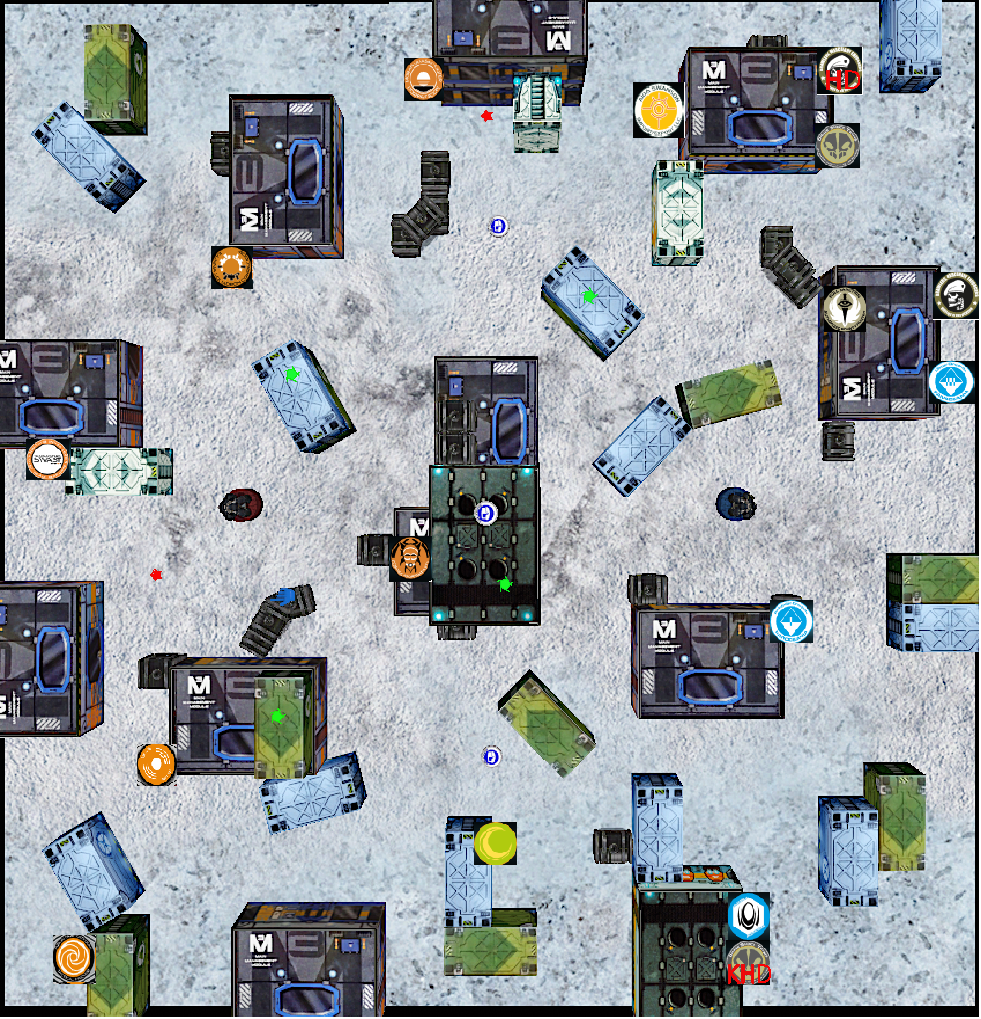 First things first … there is no warcor, nor a flash pulse bot. It seems N4 already changed the meta. Well anyway, that Iguana could see all boxes as well so bringing it down had to be my first task. Moreover, I figured that the taskmaster was the lieutenant and, if the TAG was down, he would have to take action. As hacking was no option here I decided to take brute force advancing the Druze HMG that would outrange the suppressive fire easily. I didn‘t remember suppressive fire was yielding a -3 MOD so it was actually a pretty fair gunfight: Druze on 9s, Iguana on 8s. But fortune favored me here getting one wound on the Iguana in two orders. Take that! 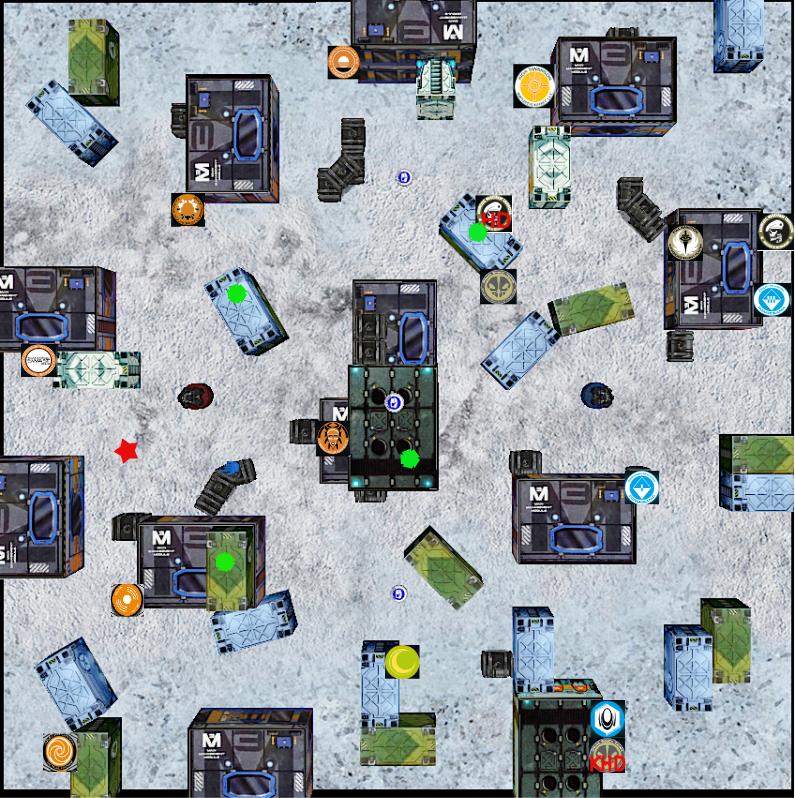 Affraid of losing the HMG I thought it might be a better idea to advance Aida and shot the Iguana from close range and eliminate the moran on the run. The coala was shot from the HMG already while advancing.

As the Moran was behind the corner I put down a mine to make him choose how to fight against me, forgetting that he would get an ARO for not being cautious. That Moran ordered his second coala in Aidas back and Jazz got Aida targeted. Oh well. Luckily, the Moran tried to kill Aida in the following gunfight with template mode, but Aida dodged bot, shotgun and coala. Her mine was not disarmed, poor Moran.

Now, Aida had a clear path around the building to shoot the Iguana. Running out of orders she rushed into a gunfight with the Iguana. Again, I had overestimated my odds: Aida on 12s – Iguana on 11s as Aida was targeted. Still, fortune favored me, taking down the TAG and leaving the operator with a single wound. 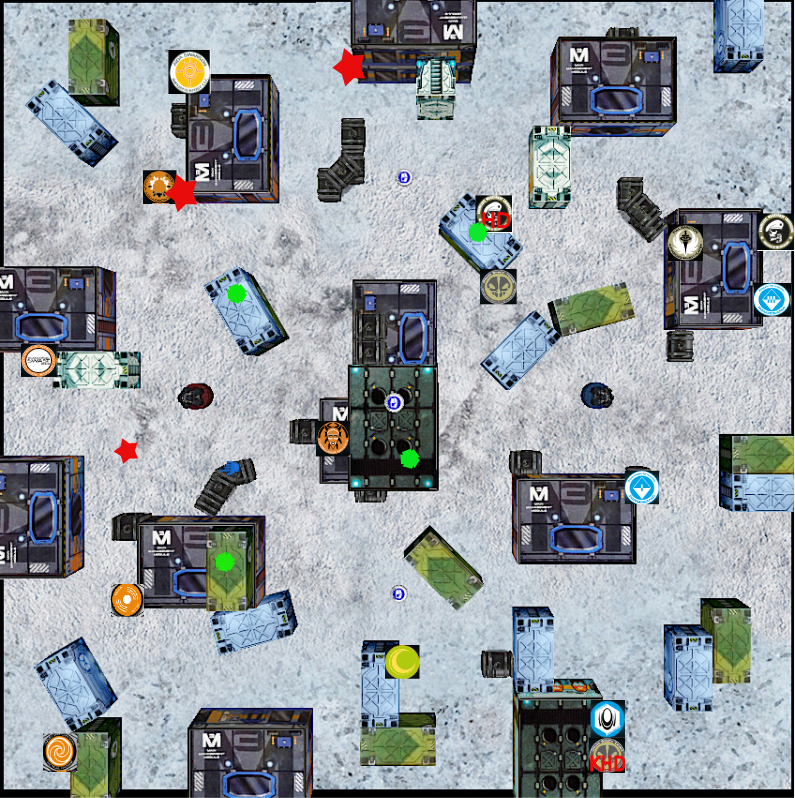 Having lost the TAG my opponent took a while to collect the pieces: Aida was in a nasty spot as she had a panzerfaust, his gun power choices were down to his lieutenant and a heavy wounded operator in open vision of aida and the boxes were blocked by the sniper. He decided to parachute his meteor zond on the lower edge behind the box of the Hunzakut. As the Bulleteer and KHD were cuddling closely the zond was afraid to get too close (being cuddled by some misfist as well…) and the other route was guarded by the sniper as well. The bot took cover beeping annoyed and Aida got into focus again. Taskmaster and operator took turns shooting and were happy to get the alien down. Finally the bandit got down the building suprising the Druze HMG. Bad  surprise…. 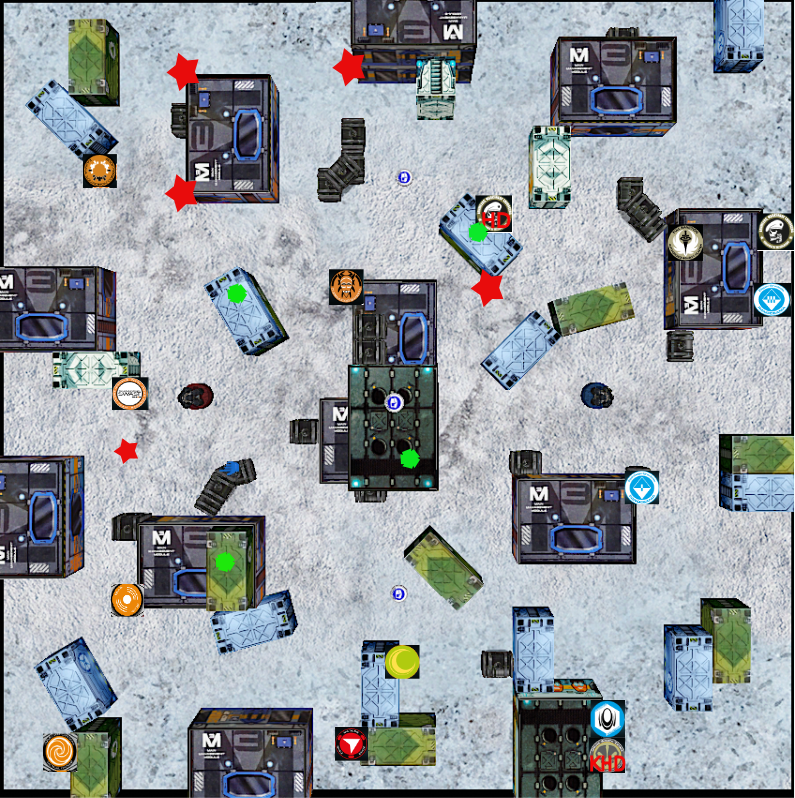 The plan was to cipple the specialists in best ciminal manner. So I started dropping a repeater with the Hunzacut not taking into account that she was standing in a repeater. She ended up targeted. Then, I decided to go on cyberwar advancing the pathfinder such that the bandit was in repeater range. As I figured my odds were better due to repeater cover. Luckily the sturdy Druze survive two  Trinity hits before finally removing that bandit.

Finally, I moved the cuddling Bulleteer/KHD duo in order to get and additional repeater in the midfield. Lacking concentration I walked the KHD with my last order into LOF of the taskmaster responding his shot. At least nothing happened. 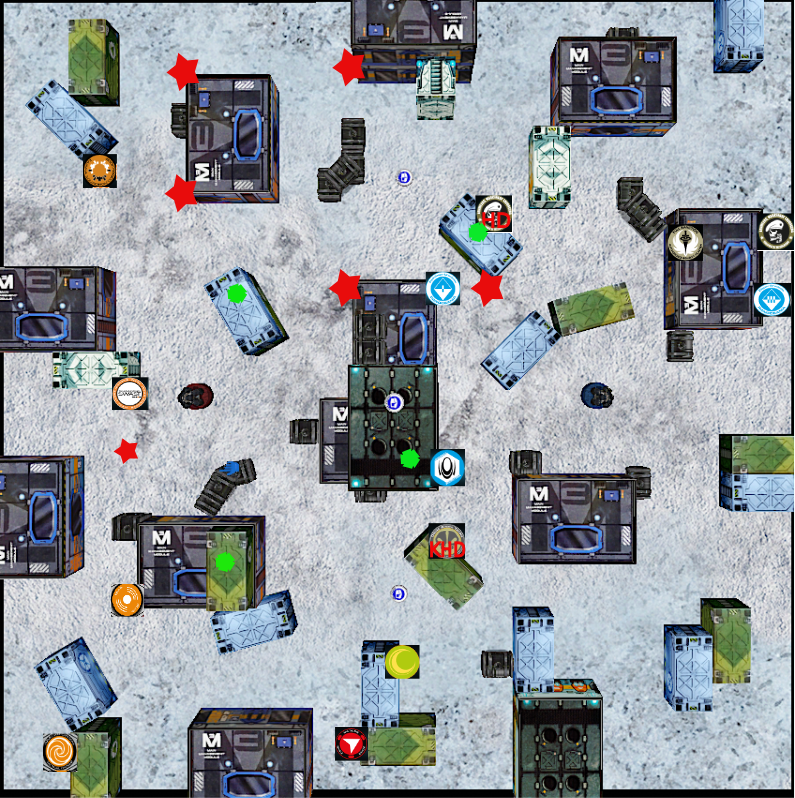 To clear a way to the supplies the operator decided to go for the sniper. That ABH proved his qualification for his job taking out the aggressor. Then, the taskmaster went into bloodlust taking out the poor Hunzakut and the Druze KHD. Remaining in the open. 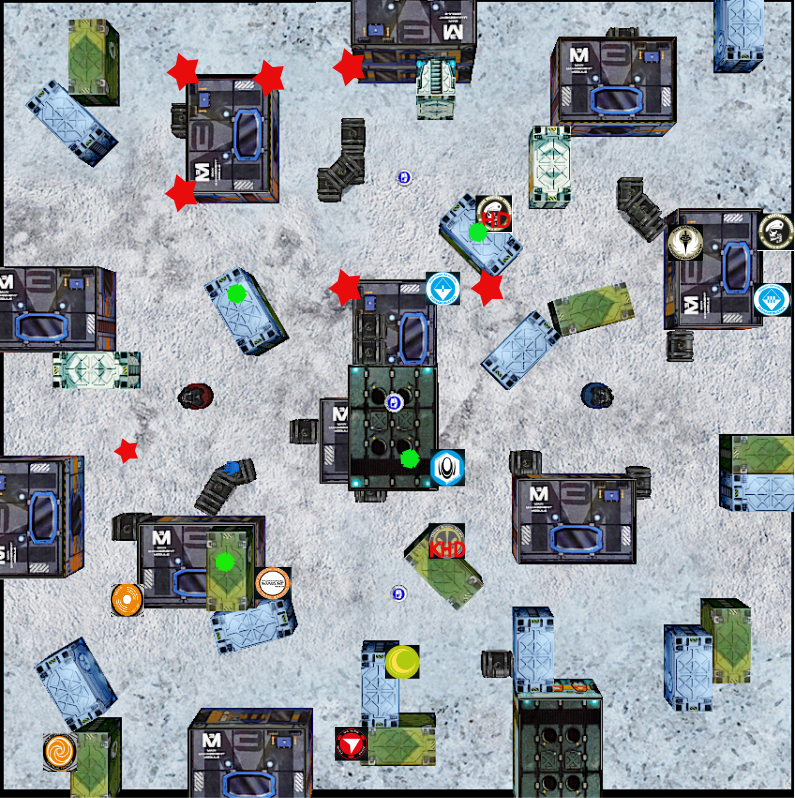 Remembering that they came for a missing and not just blood the Hacker was sent to get his hands on a box. As there was nothing to fear he remained there giving the Bulleteer orders to hunt down the exhausted Taskmaster. With a last Shot he managed to take the meteor zond out as well. 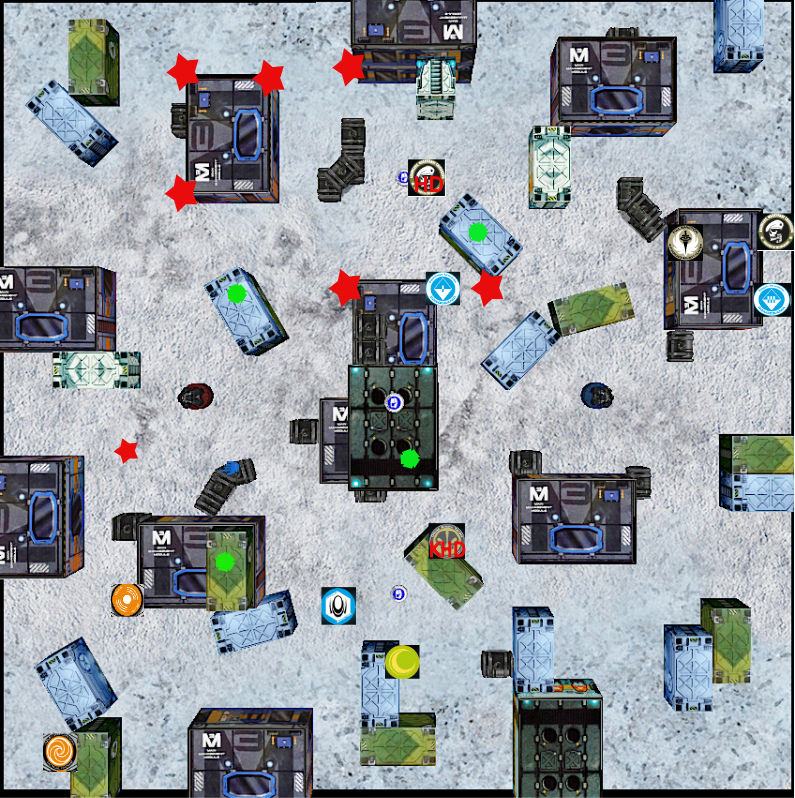 The proper game of N4 didn‘t feel much different than games in N3 for me: Looking up a lot of rules, knowing many rules not explicit enough and doing some stupid stuff. To be honest dice won me the game, there were a couple of situations were bad dice might have turned around the game.  We discussed the lists afterwards and my opponent agreed that his list was pretty much centered around the TAG, so putting it into ARO duties was a bad idea. Still his capabilities in hacking were frightening. If positioning would have been different, e.g. TAG on lower table half the game would have played differently for sure.

All together I am happy to take the first vitory in the first game. Druze feel overall cleaner and stronger than before: fireteams options, new profiles and the overall changes esp. to hacking are welcoming changes. But to get that clipper working I will need more time. As I decided to keep with one faction for the first games this needs to be seen.

One thought on “Battlereport (Druze vs. Nomads)”