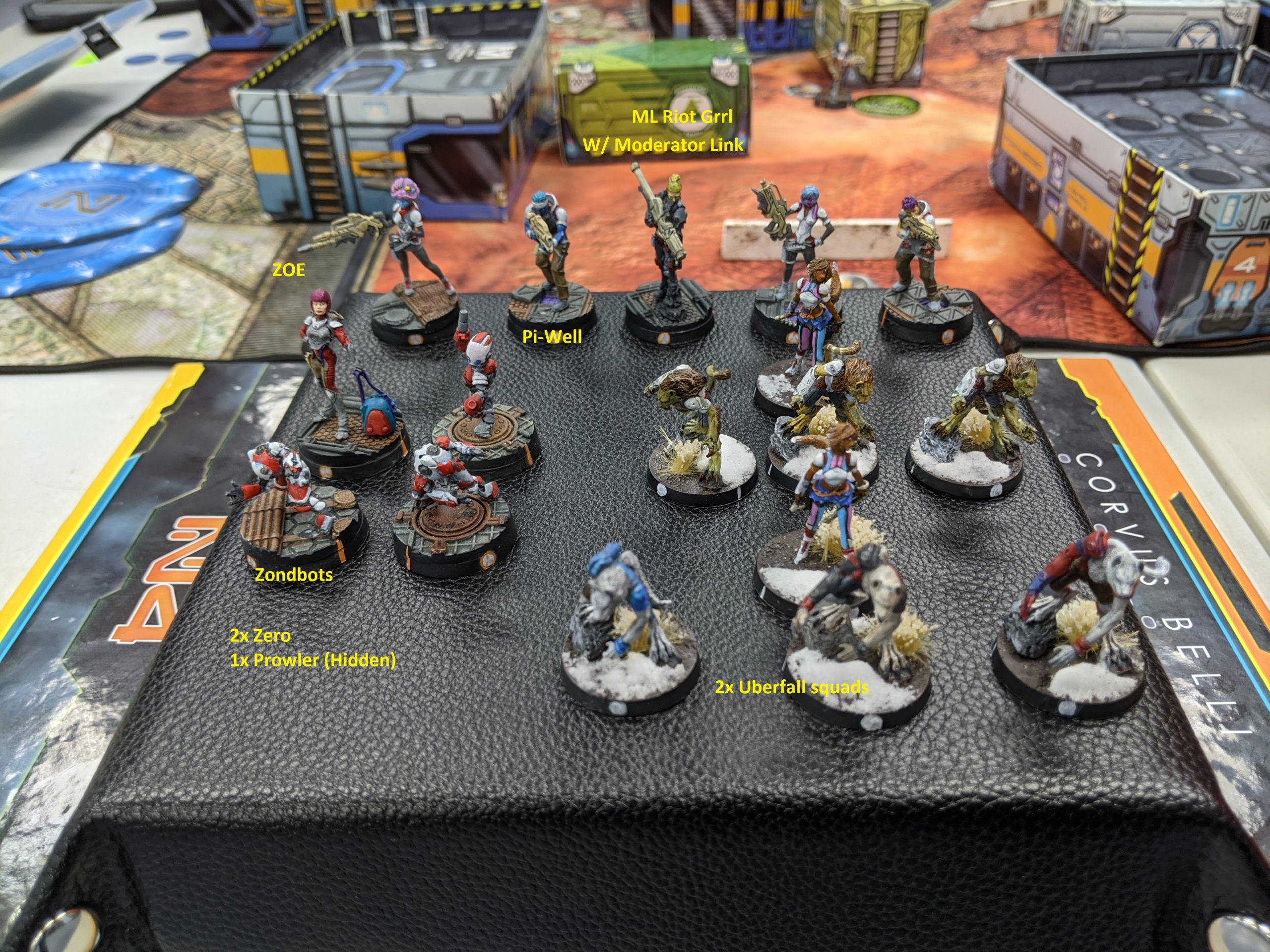 Bakunin won deployment and Corregidor conceded the first turn to allow for going second on scoring the objectives.  Corregidor placed the fireteam on the right side of the table with Morans in the middle next to objectives.   Gecko on left side to handle the flank.   Bakunin counter deployed the Riot Grrl ML in link to neutralize the Corregidor link.  Well Played!  Several camo tokens next to objectives as well.

Using the new command token use, Corregidor placed the Gecko into suppressive fire and also restricted Bakunins order count by 2.

Uberfall ran forward on the left and several pups fell to suppressive fire from the Gecko.   The Riot Grrl went nuts on on the Aug/Evader link, but the Evader deployed his secret tech:  Critting to survive!

Bakunin claims on objective and ends in suppressive fire controlling some lanes.

Corregidor responds by trying to handle the riot girl, but only puts 1 wound on.  Stays in check.

The Gecko moves out on the left and has an amazing round of tanking any aros and positioning to take a quandrant.   First turn ends in a tie on quadrant scoring.

Bakunin reveals a Prowler spitfire and breaks the Corregidor link in a gun fight.  2 rounds of shooting leave 3 members of the link dead plus a moran and the TR bot!

Corregidor responds by pushing the Vostok up into the moderator link, using new cover rules to even the odds.   The vostok takes down 3 members of the link and remains unharmed.  Vostok is broken!   The other moran claims an objective.

Bakunin pushes the uberfall link toward the Gecko but only the chimera makes it with her last order. Causing 2 wounds but leaving the Gecko with 1 wound but holding the scoring zone while still alive.  With no more orders, he is safe from the Chimera.   Zoe and Pi-Well bolster the left zone on his side, and he claims one more objective with a zero.

Corregidor responds by bringing in a tomcat to his right zone and kills the last unit holding down the zone.  This gives Corregidor 3 zones for this last round of scoring.   In the end Corregidor wins a minor by claiming more zones for one round and one objective.  Bakunin has 2 objectives.

Corregidor deployed the link poorly allowing the HI ML link to counter it, but luckily some crits held the flank and the unlinked Vostok proved to be a true hero even without the link bonuses.

The Gecko is so solid now!  Very tanky and very killy.   A phoenix profile indeed.

The hidden deployment prowler was solid.  Starter right where he wanted to be with his spitfire.

The new crit mechanics were a great change. When you get hit with a crit you immediately feel the loss and then remember you still get to roll, which feels great.  Even if you are likely to fail.  A nice change.

The new cover rules were not really a big deal either way. Most people either shoot you in cover or before you reach cover, this hasn’t really changed the game from our point of view.

N4 seems like a great new way to play.  Definitely faster and cleaner.  But retains the core feel of infinity so far.

One thought on “Master of Melee vs Psybilliah”