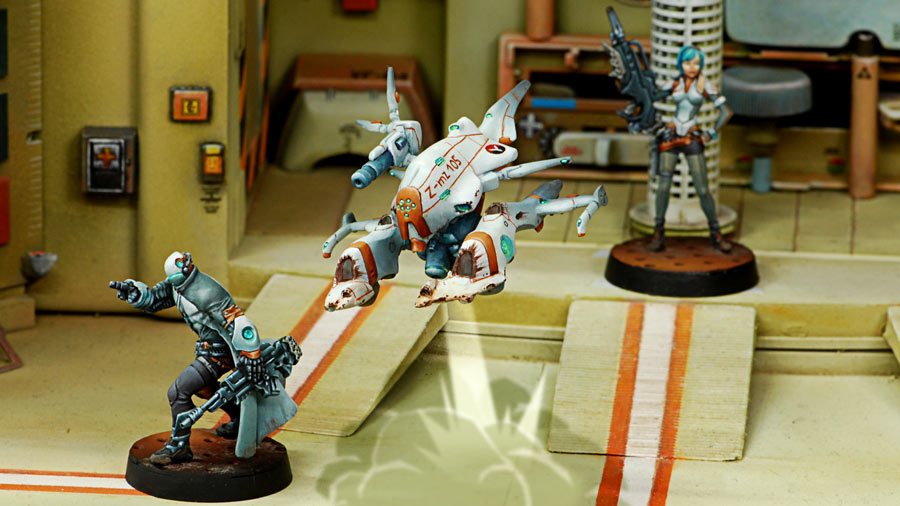 To try some new / changed / out of favour stuff from N3 I built this list.

I didn’t have a mission in mind. I just wanted different ways of dealing with tags and pushing the nomad hacking game. (hacking being why I got into infinity and nomads specifically)

I ended up playing quadrant control twice. Once in person against vanilla aleph and once on TTS against svalarheima winter force. Sadly I have no pictures, just some critical highlights from the new power of hacking and the utility of putting repeaters everywhere.

I also discovered that this list is surprisingly good at area control missions with points hidden off the table.

The units I was primarily testing were:

I found in N3 both of these profiles didn’t catch my eye for different reasons. They were either too expensive (MSR) or due to the N3 Meta, brought unused tools (dep rep).

Now the MSR is much cheaper and with the change to a 15 unit limit I find the profile sits in my lists better. Also with the increase in tags and HI the DEPREP profile brings perfect tools to cause them real problems.

My highlights for the sniper profile was as an ARO burning orders, scoring points in zones and -12-ing TR bots.

I found I got the most use from the DEPREP profile whos highlights include zoning out hackers for the interventor to murder and leaving deployables all over the table whilst hiding in a zone.

In this new meta the DEPREP will certainly make more of my lists.

I previously didn’t take this unit in N3 because of the SWC cost and I didn’t find much use for the unit. I now think I would take the boarding shotgun profile in future for piece trading.

I have found the unit more useful as a way of placing a mobile repeater anywhere on the board I need. This combined with sensor and being a fast specialist I think this unit will also make more lists.

I used this same tactic to kill a Pano EVO hacker.

In N3 I either took the full 3 bots and controller or just the controller for the counter intelligence. This was due to how they worked in N3 as they acted like a harris fireteam. This meant they were much better in reactive but required a full team for their burst bonus and their controller was a sitting duck.

Now their rules are played differently making them much more effective with just the controller and one or two bots.

I am still put off the redfury profile now with the change to crits and how units the weapon traditionally preys on are less common (single wound low armour units).

With these units being 6-4 they are veeeeeery fast useful as disposable ablative wounds and for attacking armoured units or trading.

The highlight for this unit was being able to catch a harris of karhu in a conga line where I was able to force dodges whilst the shotgun could pick them off hitting on 17s.

This is an odd unit to be here I know. Every nomad player has the hacker lieutenant profile as a staple. This section is mainly covering the killer hacker profile. Normally I would take Mary problems to be my hacker extraordinaire but I am now pulled towards the killer hacker interventor a lot.

In both of my games I was able to scalpel hackers out with repeaters. In this case placing a fast panda into the hacking area of a 5 man link where I could -6 a fusilier hacker and hoarding shotgun other units further up the field.

So far for N4 I have been avoiding the use of dice calculators to check what “should” have happened in certain exchanges and have been going on gut feeling more.

HOWEVER to demonstrate the true power of this fully operational interventor battle station I have run a few scenarios from my games.

(This dice math is from the N3 calculator but i’m more focused on the rough enough F2F and d20 odds than a 100% accurate calculation).

Interventor KH vs fusilier hacker through a repeater… a near guaranteed success.

The power of the killer hacker even through an enemy repeater is still substantial.

Even against a killer hacker behind their own repeater…

This was simmed with a shrouded using trinity back against the interventor and both rolling flat dice.

In conclusion from my games I have found that the ease of nomads being able to extend their hacking area to wherever they need it is a HUGE advantage. Being able to assassinate via isolation,score effective mobility kills, single out enemy hackers or place white noise wherever it is needed most is a skill that most armies simply can’t do.

One thought on “New toys from new Tunguska!!”