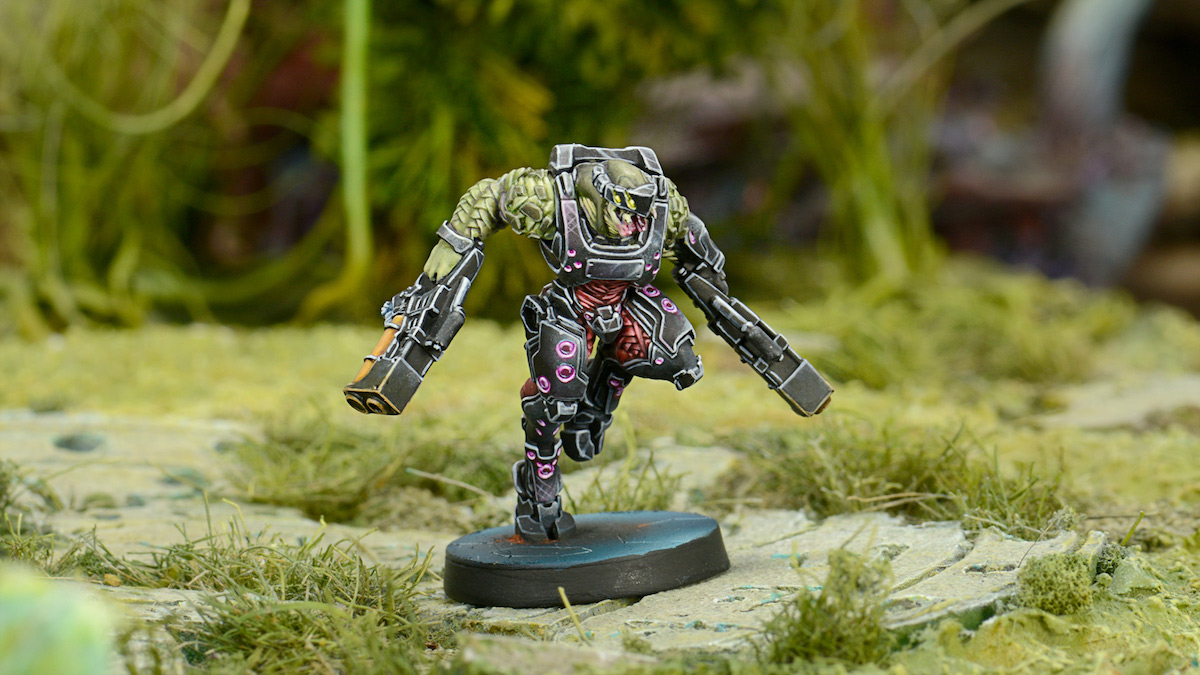 So, for this month’s challenge I decided to try to make the Chad’s of Shas work, the Jayth Cutthroats.

When they first came out in N3, I was pretty into them, but struggled to make them work on the table, often finding more worth in things like Caliban or even just Nox troops in a link so they were quickly retired.

Now we’re in N4, and with your encouragement, I decided to give them another crack. Below are my thoughts after running them (and actually using them) in three games.

So, the list was basically designed around the idea of the link doing most of the heavy lifting, with my infiltrators moving to secure zones while the Taighas kept my opponent busy. The Malignos is an unusual pick for me but it worked, especially as it begins in a scoring zone without needing to spend orders on it.

The game went pretty well for me, between the link and the Caliban, they chewed through much of my opponent’s force. Something quite valuable about Jayths is their ability to stack mods and remove them from the enemy, meaning even with a dmg 13 weapon, you are winning f2f through weight of dice and in this game was able to take out two Zuyong, Valerya, a Rafiq and a Hulang. The added benefit of the other Jayths E/M mines also came in handy, setting up some defences after pushing up on the first turn.

I’ve never played Panic Room so was excited to give it a try, though wasn’t convinced Jayth were the best option given their vulnerability to template.

The Table (this is my own personal outpost table; we used the barbed wire to represent the Panic Room)

This time I relied more on Sheskin to do the heavy lifting and use the two Jayths as more support and room clearing. Again, the chain rifle E/M mine Jayth did well, laying a mine for the Hollowmen to deal with before running into cc with Perseus and killing him (natural born warrior helps). I didn’t end up using the Pit Patrol Jayth at all, all of my orders were going into the Sheskin link. You will notice I also took Aida, who did ok, I mostly took her as she doesn’t have a marker state and therefore lose nothing by rolling for her in this mission.

Not convinced the Pit Patrol is a good profile. It’s not a very well “synergised” unit in that the Taigha has no ranged weapon and therefore cannot create the cool ARO fork you might see in a Peacemaker for example. It’s also very expensive for a 1W 0ARM unit with no weapon capable over 8”. The mine on the Taigha is useful but I’d rather have the chain colt.

This game was won 10-0 but this may have been mostly due to my opponent forgetting some crucial rules (Kriza has mimetism and Grenzer’s have Marksmanship!)

This list is a variation on the first, except opting to drop Dr Worm for a Speculo and downgrade the Shrouded to a Seed Solider. I quite like this list and will likely play it again.

The link again did some decent work once the Speculo had removed Lei Gong and bringing the link to four members, shooting the Shang Ji HMG from inside 16” with the Red Fury Jayth pretty much forces the Shang Ji to dodge. The other Jayth didn’t do a heck of a lot but again, burst 2 chain rifles on an msv1 profile are very handy. The game went my way again here, my opponent had some really bad dice which set him on the backfoot from turn 1.

I reckon the Jayths are worth taking but are expensive enough you should build a list around them. The cheapest Jayth is actually a great utility piece with its combination of direct templates, E/M and solid cc and is a worthwhile addition to any Haris, especially when you have wildcards such as Sheskin and Dukash.

I really like the Red Fury, the -6 to hit combined with msv1 can be a real headache for your opponent in the active turn and may just force them to dodge if they haven’t got a means to negate the mods.

The downside is if they get caught in ARO against templates then they go down easy. Which is like a lot of things I guess, but it seems to hurt more here given the points invested when you could’ve paid a little more, (less than 15pts) for something like Sheskin, or the same points for a Caliban with Spitfire AND msv1!

The other issue is the standard Jayths are good from 0-8” or from 8-24” and there’s no crossover. Meaning, if you lose your Red Fury, all you have are SMGs (unless you take Sargosh). Hence why I feel these guys work best when a wildcard such as Sheskin or Dukash is included as they cover those range bands and add some durability. This is fine, but if you’re taking Sheskin, I feel you might as well buff her to the max by sticking her in a Nox core for the same points as a Jayth Haris.

Jayths have a lot of utility, interesting weapons, grenades, mines, direct templates and what I believe is the only combination of -6 and msv1 in the game? They’re also excellent in cc, better than Sheskin against other cc specialists due to NBW and Sargosh is even better with his D charges! I just wish they had a little armour, or regeneration to help them stay in the fight longer. I will continue to try them out, maybe looking at running a haris of them paired with a Sheskin core.

Anyway, that’s my thoughts, appreciate any feedback on what you think about Jayths and whether the profiles need changing to make them more appealing to players?

One thought on “Making Jayths Work”