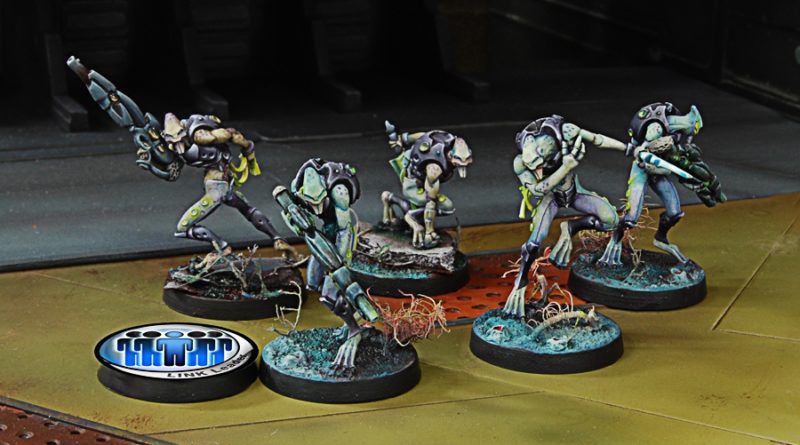 This was my second game with Shasvastii. TTS has been amazing for providing easy access to armies that I don’t normally play, so I decided to check out SEF. Setting up for this mission I made a lot of mistakes, beginning with list building. I had an idea and ran with it, even though I don’t think it was optimized for the mission.

In any case, my goal was to present a null defense by basically leaving everything prone, out of sight, and in a token state where possible. I covered the objective with the Haiduk, an Ikadron, and two of my Seed Soldiers. The idea, knowing that I couldn’t stop the Uberfalls, was to make it cost orders to put down eclipse and get where they wanted to go, without exposing myself to the Riot Grrlz on their active turn. Instead of placing the Seed Soldiers as my first line of ablative defense, I clustered them towards the center to hamper my opponent’s ability to get to the objective, and to allow for a coordinated order to clear the way to my objective. (Spoilers, BS 11 isn’t very good.)

I put my Malignos in the center of the table so that I could send it wherever I needed to go. Plus I had a suspicion that his camo marker was a Zero KHD. The Noctifer was on top of the building next to my LT decoy and had great LoF across the table.

I think I forgot to take a picture before the Uberfall made their impetuous moves, so my opponent did not actually deploy them too far forward.

He placed his core team and most of combat group one on his left because the top of the round building was a great place for the Riot Grrl with a missile launcher to overwatch the table. Because he was going first, my opponent did not place the Riot Grrl on top of the building to start.

He placed the transductor behind the objective so that it was within repeater range, meaning that I’d have to contend with a lot of hacking AROs and/or some serious gunfire from the Riot Grrlz.

He put his haris on the other flank to advance up the table from a different angle.

Then, and one of them was his reserve deployment, he put his Uberfalls on either flank. They would be his forward elements, clearing the way and eventually grabbing objectives.

My reserve was the Speculo and mine inside the building on his left. My goal was to present something that he would be worried enough about, that he’d spend time on his first turn dealing with it, instead of moving towards the objective. It worked! The Speculo did die in the process though.

My opponent utilized his Uberfallkommandos to great effect. One of them climbed the building on my opponent’s right and discovered and killed my shrouded.

The other team (pictured below) moved left and dug out the Speculo. On the way, I made my first gameplay mistake. I revealed the Noctifer because the entire team passed under the area of a template. This was a mistake for two reasons (at least)

In the end, nothing happened. I don’t remember if I rolled low and my opponent passed all of his dodges or if I just flat out missed.

My opponent diverted for a few orders to get the Riot Grrl spitfire up along the building on the left side of the table to close distance with the Noctifer and handily removed it from the table. Then, moved his fireteam back and brought his missile launcher to the top of the building. Finally, he spent a few orders to discover and mob my Speculo.

In the end, I lost a Shrouded hacker, a Speculo, and a Noctifer. It certainly could have been worse.

The important thing in this turn was that I tried out my coordinated panzerfaust against the Riot Grrl with her missile launcher. Despite two coordinated orders and spent panzerfausts, the Riot Grrl remained standing at the end of the turn. As it turns out, BS 11, even at burst four, has a hard time getting past a dodge of 16. It didn’t help that my opponent rolled in the sweet spot (11-16) on the first roll, and I think tied my highest success with the other. (I forgot to take this picture at the right time, so I took it after I revealed my Malignos in the second turn).

I pushed up with a Taigha over to where my Speculo’s corpse had been devoured by furries. There was something else I tried to accomplish this turn, but I can’t remember what it was, and I’m fairly sure it didn’t get anywhere.

My opponent pushed further up the table with his Uberfall, defeating my poor Taigha in close combat after cornering it against the other side of the building on the left. He moved himself into striking distance of the objective and whittled down a few of my midfield pieces, reducing my order pool down to an uncomfortable level.

I was running out of options, but I still had a Caliban Engineer. I used a few orders to maneuver down to the closest corner of the building pictured to my opponent’s deployment zone. Then, attempted to shoot the gap. In the end, he discovered me and I lost the shootout to the Zero and the Riot Grrl. But…his Zero was revealed!

So I revealed my Malignos and hacked the Zero’s brains out. Then, I didn’t have enough orders to actually make a move on the objective, so I tucked the Malignos into a corner and recamoed. Then I tried to kill his advancing Uberfall, but he got eclipse smoke down. I moved my Haiduk up the table to cover the Uberfall’s escape.

At this point, my opponent had two significant moves to make. He brought his Haris team up to pick off my Malignos and then advanced as far up the left flank as he could to secure my HVT.

With his first combat group, he used his Uberfall to grab the objective and take it back far enough to pick it up with his core team and bury it in his deployment zone. These Pupniks are obnoxiously fast and were able to dodge the shots from my Haiduk. Then he got the Uberfall close to the Haiduk to make it harder for him to clear out the Riot Grrlz securing the HVT.

I think my Haiduk was on top of the bus at this point, but again, my picture was delayed…

I tried to get my opponent off of the HVT but my Haiduk died in the reactive turn instead of killing the Riot Grrl.

I didn’t have anything left that could make it to the objective, so I ran my LT up to the location above and secured my opponent’s HVT, denying him the point It’s still a camo token but I had the short skill to dodge and get out of the camo state. I don’t remember if that’s a thing. In the end, Bakunin took the victory, the score was 5-0.

Well, Bakunin took the win, obviously this being the Bromad academy, that makes sense. I mentioned a couple of my mistakes along the way, but realistically, I found that except for the coordinated panzerfausts falling flat, my list did what I expected it to do. It bogged down my opponent and presented me with some excellent opportunities for maneuverability due to all of my marker states. For this mission in particular, I think I would have been better served with a second Speculo and to use my Taigha’s to make a mad dash for the objective. With them in the smaller combat group, that wasn’t happening.

While the Seed Soldiers did not perform, I do think that using them as an ablative defense has a lot of merit. The fact that they can use burst two chest mines in the reactive turn (if I’m reading doubleshot correctly) is fantastic. The fact that they have to dodge to reveal in the reactive turn is less fantastic, but they can be an annoyance for my opponent, with the option to coordinate a panzerfaust as a threat for armor. I am also disappointed that they show up as Silhouette X camo markers and not Silhouette 1, so they are unable to disguise themselves amongst the other midfield camo.

Overall, I think one of the things I’m missing with Shasvastii is high burst. I want to try running the Caliban and Noctifer with spitfires to see if the mods plus burst is enough to actually do damage to my enemy when I need to.

The Caliban engineer is awesome in theory, but I find SMGs to largely be a worthless weapon. There are a couple of profiles where I like them:

Dart and the Ryuken have the mods and/maneuverability to actually take advantage of the limited weapon. For the most part, only being effective out to 8 inches means that your model will be in range of your opponent’s pistols and templates when you are able to shoot effectively. The Caliban suffers because BS12 and mimetism -3 isn’t potent enough to actually leverage mods to make the weapon work. I can see using the SMG to close the distance to survive long enough to engage in close combat, but that can get pretty order intensive and is still risky. The Malignos can’t really gunfight well either, but mimetism -6, hidden deployment, and the additional vectors of attacking with a killer hacking device mean that it can work, although usually gunfighting with it is only a last ditch effort, I’d much rather camo past something.

I think the Caliban with MSV1 and a spitfire could be an excellent attack piece for Shasvastii. It has the maneuverability afforded by a marker state, with a solid, high burst weapon.

I like the threat of the Noctifer, although I want to try the spitfire, because I think having a high burst weapon with mimetism -6 is worth it. It still takes up the slot and could create the illusion of the threat of the missile launcher as well.

All in all, it was a fun game and I have some new ideas to try out for future games.