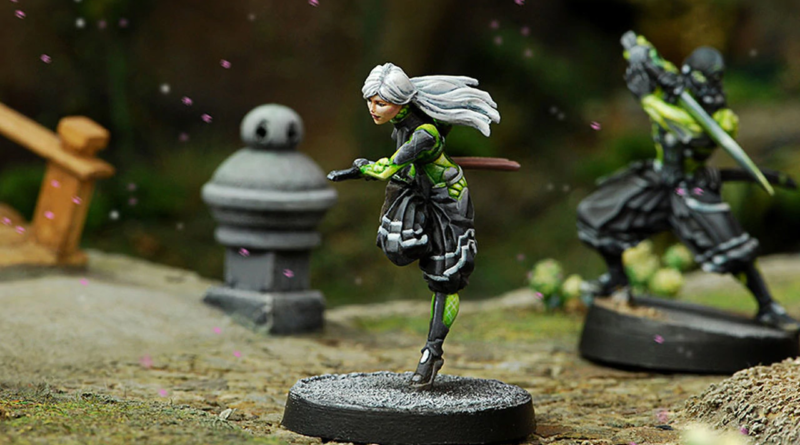 There’s an awesome venue in San Francisco called The Armory, so I needed to build my table as an approximation of the area! We were going to have a battle across the rooftops of S.F. to see who’s crew would dominate the party at The Armory!

Thinking about what would be good for over infiltration, Hidden Deployment hackers with Spotlight, a Guided Missile bot, and a couple of repeater REMs really stood out to me. If the ninjas succeeded on their over infiltration rolls, I would be able to Spotlight the enemy in ARO as they moved out of their DZ, and then drop missiles on them in my active turn. If they failed the rolls, I could move up the faster moving repeater bots so the hackers would still be useful even in my Deployment Zone. Also, with Terrain (Total) and Localized Decompression on the board, my ninja infiltrators couldn’t be boxed in if they got stuck in the DZ. I also took Saito instead of a third hacker ninja exclusively because I thought he’d be more fun (and thought I shouldn’t just rely on +6 infiltrators for the Bromad mission.)

I made my infiltration rolls first, because I would base the rest of my deployment around whether or not they succeeded. Saito went first, and successfully took a position that would allow him to attack the right side of the board with ease. The ninjas rolled next, with one failing, and then the second succeeding to take a point in the center of the board in the Localized Decompression. This position would project her hacking area over all three of my opponent’s main attack paths into the Armory, the Saturation Zone would help keep her safe, and with Terrain (Total) she’d have an advantage when she moved out of the Difficult Terrain. For the last of my rolls, Shinobu succeeded, so I placed her in a position to attack the left half of the table. No matter where my opponent deployed her important pieces, I’d have a ninja ready to strike on my first turn.

I deployed my Keisotsu Core defensively, with the Missile Launcher watching the one fire lane that had no Localized Decompression, and I kept my two squishier REMs close to them so any AD troops would have a harder time fighting their way in. Finally, Yojimbo, Mushashi, and my last repeater REM deployed on the right side of the table. Mushashi would head towards the Armory once opened, Yojimbo had a straight path to drive forward and do an awesome motorcycle jump off the rooftops, and the REM could move it’s repeater coverage forward to provide hacking into the Armory, if needed.

Melanie brought two main Fireteams to push forward and fight for the Armory. Attacking up her left table side was her Kusanagi-Wolfgang-Moira Haris, and poised to head up the right side was a Riot Grrl-Avicenna Duo. Additionally, an Überfallkommando group deployed on a center rooftop, waiting to charge down whichever path looked the most open.

Kusanagi had deployed within a couple of inches of Saito Togan, so to start, he came out of the shadows and murdered her. Immediately after, Shinobu unveiled herself and flit up the wall to the rooftop with the Riot Grrl and Avicenna. In a few short sword strokes, they were both dead. Down two orders from Melanie’s Command Token, my first order pool was depleted. The second pool used their orders to advance up the board. Not a very exciting turn, but very effective.

My first turn had been a crippling blow for Bakunin. She had lost her two most useful Specialists, and a huge chunk of her offensive capabilities. She still had her Überfall and Wolfgang to contest the Armory once it opened, but they would need to pull off a miracle. Wolfgang started the turn firing on Saito. Despite Saito’s Mimetism (-6), he could only dodge a couple bursts of bullets before dropping dead.

A Morlock tried to follow this up by assassinating Shinobu, but she just dodged away. With the remaining orders in Pool 1, Melanie tried to use her Moderator Grenade Launcher to take down Shinobu, but after a few dodges, Shinobu reached base to base with the Morlock that had been trying to kill her, preventing any more template weapon shots. Melanie then passed the turn, not wanting to use her last couple of orders to put her in a more vulnerable position.

Top of 2 – JSA: Did I mention this was a guided missile list?

The game had been so incredibly one-sided that neither of us were really having fun, so I decided to use my turn to finish Melanie off. My hidden deployment ninja hacker came out of hiding, Spotlit the Überfall and Wolfgang, and a couple of guided missiles later, all of Melanie’s most important pieces were dead. We called the game here, since there just wasn’t a realistic chance for a comeback at this point.

My list worked exactly as planned, but neither of us had any fun. The successful over infiltration for both Saito and Shinobu let me pull off a turn one decapitation that left Melanie essentially defeated before her first turn. I did still learn some things though!

For the infiltrating hackers, they worked like a charm. A hidden deployment hacking threat sitting immediately outside the enemy DZ is extremely nasty, especially with guided missiles backing it up. It also provides an avenue of attack that’s very unique and unexpected in JSA. This was a more “for fun” list, but I think a list with two or three ninja hackers and a Rui Shi to project repeater coverage might be seriously playable. I also play OSS in Aleph, and I am definitely thinking about running a version of this with Dasyus hackers in the future.

I hadn’t played Shinobu in a while, and very quickly remembered how squishy she is. Even though she did her job perfectly, running both her and Saito made it so I didn’t have enough orders to get either of them to safety before my turn ended, and I was more terrified than I’d like from her being close to a 6 point Morlock Chain Rifle.

I’ve been making the over infiltration roll on Shinobu and Oniwabans in the past, but the ninja hackers worked very well too. I think the roll is probably the most powerful on missions with a large central exclusion zone, as you only lose four inches and a marker state if you fail the roll, but get a very unexpected and nasty surprise for your opponent if you succeed.

Finally, this was the first game I played against a list with Wolfgang Amadeus Wolff, and wow, he is tremendously scary up close. Definitely going to treat him as a priority target going forward.

One thought on “Over Infiltration Overkill”