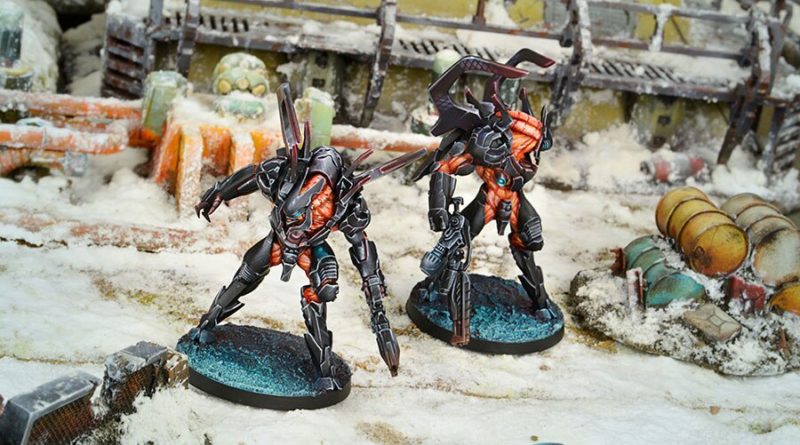 So, my wife (Jen/DethKatt) and I were doing some training lately, specifically on Mindwipe and I decided “hey, why not do the challenge and send the batrep to Bromad Academy. Let’s just add some armor to a CA which I’ve been working on and go for it.” I had tried an early N4 triple Nomad TAG list so I started there knowing that CA has some light TAG options. I was initially underwhelmed by the choices on the Xeodrons until I really started thinking about the K1 combi option and the list just went from there. Queue foreshadowing. The issue with Onyx seemed to be that very few of the armor pieces can interact with the objectives in Mindwipe so the rest of the list was meant to do the mission including a Fractaa with D-charges that could single-handedly win me the game.

Jen went for a serviceable defensive link starting with the Black Friar HRL, a mixed haris with the Teuton spitfire NCO and a hacker to go do the mission, with some mixed other stuffs. She admitted to me after the game that she learned a lot about the issues with the list.

We had a gorgeous table that Jen has been working on (COVID project), with quite a large armory sized building deployed centrally toward the side of the table that Jen forced me to deploy on. I deployed my Onyx first, holding back my Overdron Sniper, hoping to show only my shorter ranged dudes and dudettes (what is the gender of an Ikadron even?). The armory split the two central consoles nicely, giving me a place to FD my Umbra hacker to move either way depending on which would be less guarded. I mostly guarded my servers with corner defense and repeater coverage.

Jen opted to deploy her defensive fireteam on a building overlooking my left side with her haris coming from my right. Seeing the Black Friar with MSV2, I placed my Overdron Sniper with Albedo Tinbot to directly counter him and take the long firelanes uncontested for the first turn. Her reserve was a suspicious midfield camo token.

From previous experience with Mindwipe, I know I want to grab the console early to figure out where I need to push to get rid of the exposed AI server. Jen had smartly mostly null deployed so that gave me my choice of consoles for my Umbra. I took the one on the right as it would make her go further to get the last console remaining. Success (barely… 19/16 roll on a WIP 14 +3 for the mission) and it exposed the central server as my target. Bleh. Middle of everything. So I “smartly” Combat Jumped my Fractaa on the roof with the server, where I found a nice spot conveniently out of LOF of her entire army. By “smartly” I mean “didn’t remember that you can’t destroy servers on the first turn, and failed the roll so it made the point moot anyway”. Oh well, 60% of the time fails every time? Lesson learned, bring EVO to better count on combat jump. So the Fractaa ended up on my right flank. I spent the remaining orders in his pool to move him up in an area covered by the rest of my army. I then used the last orders from the main pool to get rid of the peacemaker which had poked too far out of cover and get LOF to a camo token with the Xeodron. To my surprise, the camo token was a mine which the Xeo easily tanked. Unfortunately I didn’t have time to go hunt whatever had put that there…

With her servers fairly well defended at this point, Jen revealed the midfield Trinitarian Minelayer to go after my Xeodron. The Xeo wasn’t in suppressive but his armor and cover gave him good odds. Between good rolling on dodges and armor, I forced her to push deeper into my zone if she wanted the Xeo gone. She surprisingly opted to get close enough to melee the Xeo at the end which was his downfall. Lesson learned for her, press the advantage with the boarding shotgun and Mimitism -6.

The Trinitarian should have ABS (always be shootin’), Mim-6 and a Boarding Shotgun in good range vs the Xeo having to put his heavy pistol to work was in her favor. Instead, Jen closed the trinitarian in to melee allowing the Xeo B1 on 17 instead of B1 at 10 or 7 with cover. Simultaneously, she went from B2 on BS15 to B1 on CC18, but sacrificed Damage 14AP for PH10… it did not go well for the trinitarian.

She moved on to the Haris, pressing toward my zone where we both realized that the Teuton NCO has martial arts, but no stealth and had to step into the Umbra’s hacking range. He was promptly isolated for his trouble. Finally, she pushed her KoJ hacker forward to get the console successfully and to harass my troops. His combi rifle was no match for the Xeodron’s armor though she did manage to get a wound through. She played dangerously to pursue my Fractaa knowing that he was my best hope of doing the mission easily but some lucky dodges kept him safe.

It was hard to go much of anywhere with the KoJ all up in my business, so I set to the business of removing it. I could have tried the Xeodron where the K1 could have made him into swiss cheese, but the FtF rolls can be scary when I couldn’t really get him outside of 8”. I chose to push KISS’s repeater and neutralize him with hacking. A few orders later, he was isolated and immobilized. To seal the deal, I pushed KISS around the corner to glue him down and in doing so, Bit finished him off with her SMG. The knight was far less scary when he couldn’t do anything other than Reset at -12. With that done, I pushed the Xeodron up to clear out her defense and allow the Fractaa to advance. I ended with him in suppressive fire in her deployment zone. With albedo not protecting the Overdron anymore, I used his tactical awareness order to drop him behind total cover.

Jen realized that there was a perfect corner of a building where she could get LoF to the Xeodron with the Black Friar. It was dicey but with her plans effectively foiled, she had to get gutsy. It paid off, dropping the Xeo in her backfield where I had no real chance to bring him back. The isolated Teuton moved forward to try to get close to any server to do damage, but couldn’t do much. She settled in for the final turn as defensively as she could.

At the beginning of 3, we were tied in score as neither of us had taken out any servers so it was time to change that. I moved the Fractaa into group 1 to give him access to more orders to start with. I had to deal with the pesky fireteam occupying the building overlooking my approach to the middle server. Queue the Overdron, I was able to guess the range almost perfectly, and engage the Black Friar at just over 32” with the plasma sniper rifle and also blast another nearby Crosier which did not end well for either of them. I used a number of orders on the Fractaa who managed to blow up the server and finished the turn by destroying anything I could get my hands on to give her fewer options.

Jen called the game as she had nothing that could reach any of the servers to hurt them. 9-1 victory for Onyx as I hadn’t gotten my classified objective completed.

So originally, I was underwhelmed by the Xeodrons in Combined compared to their closest cousins, the Geckos. But then I started thinking about the K1 marksman rifle and +1 damage on K1 is actually really nasty. Damage 14 where the best you get is cover, needing 12+ to save? Yes please. Out of cover? Good night. This is the problem I had with Jen’s KoJ hacker. Sure, stat-wise it is beautiful but a Combi Rifle is not a super scary weapon. Obviously the Overdron +1B sniper is another great active turn piece, and together they synergize well. The Overdron clears lanes, or makes sure heads are ducked and the Xeo can push into good range for the marksman rifle and take care of business.

Armor really is something to consider in N4. Both to have it, and knowing that opponents will have it so you will need to counter it. You can’t just fish for crits with combi-rifles against high armor targets unless you want to burn orders like water. It still works for armor 2-3 in cover maybe, but armor 4-6 with only a 20-30% chance of failing armor saves against damage 13 forces a lot of dice rolls and orders expenditure to chew through. Over the course of the game, Jen put at least 8 orders into killing my Xeodron, not counting the reactive fire he took.