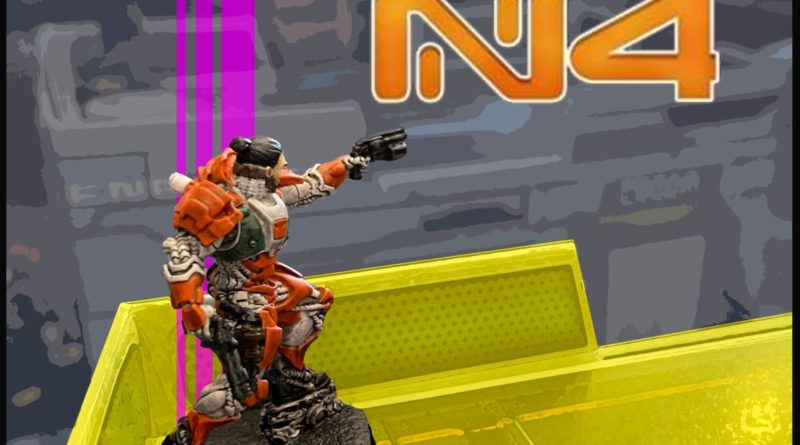 I won the Lieutenant WIP roll off 2-1 and chose initiative.  I wanted second activation so I didn’t have a command token strip 2 of my single group’s army’s limited orders. This did force me to deploy first.

Since I felt like orders would be precious in this low model count list, I null-deployed everything I could.  I broke my team into two Fireteams.  The Zuyong Core on the left had the ML, combi w/Tin bot, combi Lieutenant, and Shang Ji Hacker.  I hid most everyone behind some tight buildings, hoping to use the tight corridors to my short range band advantage. The ML was prone on a roof hoping to wreak havoc on my active turn.

My right flank had my Haris (HMG, Sheng, and Paramedic).  These were still hidden but I left my HMG out to guard the long diagonal corridor to slow down anyone getting too deep into my territory.  The bots decided to hang out and hopefully last until my first activation.  Krit was held back and decided to go prone on a building deploying a repeater in range of the Console.

O-12 deployed his defensive Core on the left on the highest building and stuck Saladin in an almost completely covered corner. This defensive core position held 2 antenna and the console in easy line of fire.  The right of his board would be O-12s hammer. Varangian warbands and a haris of Parvati, Beta, and a PSI-Cop would be the main strike force.  Casanova and Andromeda were held back.  Andromeda failed an easy infiltration roll so was stuck on the back edge while Casanova was aggressively deployed to start working through the middle. O-12 was using a lot of proxies so the pictures may be a little confusing.  I liked that Andromeda traded in her cyber kitty for road hog and Casanova was slumming it as a CSU officer.

O-12 starts off right away showing me that my one defensive play was useless. Varangians throw smoke and block sight down the corridor my HMG was watching.  They proceed to get into my middle left flank easily.

This allows the O-12 Haris to advance up to the left Antenna building.  The high vantage point gets the Beta to rain Spitfire shots down on both my Shang Ji and the Guardian Bot. I decide to see if my armor can hold out in defense and take shots back.  I am able to hold out for a few orders but the Shang Ji and Guardian bot go down. Beta is holding the corner of the building with Parvati up top to bail him out if things get tough.  I try to have my Zuyong ML butt-dodge into view to take some shots but he fails.

Casanova and Andromeda move up a little into the middle, guarding against any suicide run by me to tag their console.

The Defensive Kappa/Blue Coats link disbands to shuffle around, as my opponent recognizes that they are hopelessly out ranged and are in view of the prone Zuyong missile launcher.  Due to a deployment miscalculation, the Kappa with a counter missile launcher is on the wrong side of the building out of sight to attack but in the blast range of any successful incoming shots. Shuffling doesn’t fix the LOF issue but gets him out of the blast radius. O-12 ends the activation reforming the link.

I ended up starting my activation down two orders anyway.  It was a fair trade though as it ate up 8+ orders to take them down but O-12 does have some good board positioning now. With my hacker unconscious and my paramedic across the map, my deployed repeater is useless.

I decide to push back against the O-12 aggression.  My main goal this turn is to eat away at that defensive link and gain control of the left flank. First up, I butt-launcher some missiles downtown across the board to the defensive link.  The double burst hits and obliterates the Kappa hacker but the Blue Coat and other Kappa dodge.  I target the Blue Coat as well and he is pink mist as well. Feeling invincible, Zuyong Missileman scooches into view of the Beta and decides to try to tank shots and trade back with three light shotgun templates. Beta Nanopulsars me back and I fail both ARM saves. Doh! The Beta tanks two hits and takes one to stay up.  Oof.

I turn my attention to the right flank and have my Haris spray lead all over the board and hitting everything but the Andromeda in my sights.  Every order I spend, Andromeda dodges closer.  Soon the HMG is in bad range bands so I switch it up and have Tai Sheng approach to spray and pray.  Hits start to land and after about 20+ dice, Andromeda falls. I work my way up a little farther and take down the missile toting Kappa that had tried to hide from the missile launcher blast radius.  With the Defensive link de-fanged, Tai Sheng runs out and tags the far right Antenna.

I reposition the Haris back to my side and take up a defensive position guarding the smoke lane (maybe they’ll fail?) and the antenna I claimed.

With a few orders left, I have the combi Zuyong, swing around and work on the Beta. Through some lucky rolls I drop him to zero structure and he falls out of sight… for now. Really wish I had one last order to go into suppression fire but Andromeda ate up a lot of actions.

Varangians Smoke to block the corridor again and get more people through. They also try to get up the building and smoke on top of the building to cover Parvati.  The Combi Zuyong is still fuming that O-12 dropped her boyfriend and starts covering the ascent. The shot goes way wide even though it was an easy 16 to make.  The smoke face-to-face goes better with the Varangian busting on an 18 and taking a hit to the face, dropping him.

With no smoke to cover her, Parvati doesn’t want to risk going out to repair the Beta.  O-12 gets Casanova in play instead.  Casanova gets through the middle by cautious-moving across the gap (again thwarting the Zuyong HMG- guy just doesn’t have what it takes to help defensively). Casanova sets up with his back against the wall covering any advance on the middle antenna and goes into suppressive fire.

Going back to the left flank, O-12 decides to use some cover to switch on the left antenna. My shots go wide and O-12 is successful, tying me up in the antenna game. O-12 then pulls the remaining defensive team to get into position to cover the center antenna and wraps up their second activation.

Krit Kokram is pouting because he didn’t get to do anything in round 1 so I put him to work. He jumps down and then rushes to the corner, catching Casanova in the side. Even though it is a suppressed SMG in danger close range, I decide to Invincible™ up and tank for the team.  Two heavy shotgun blasts coming, Casanova elects to shoot back.  The shotgun blasts take him down and even though all three SMG shots hit, only one gets through Krit’s armor.  Krit takes down Casanova for a very large position swing midfield.

With Casanova down, I bring the Haris back in to do some mission objective damage.  Sheng works through the remaining Kappa which falls quickly.

The center is now open so I rush in with the haris.  Zuyong HMG finally does something good and touches the console.  The rest of the haris has Sheng go down and flip the switch on the center antenna with the last action.

O-12 is really on the backfoot now being down most of their orders in their main group and a lot of their best tools are out of action. Parvati burns orders to run down and get to the center to take on an exposed Tai Sheng.  Unfortunately, Krit is still there and the combination of Sheng and Krit are too much for Parvati to overcome. She gets diced and goes down after a few orders.  With not enough orders to bring anything useful to bear and down in both Console touching and antenna, O-12 concedes the field.

Invincibles proved tough to take down in this match up.  I feel like the terrain favored me quite a bit since I had so many short range band weapons and could maximize cover to increase my defensive odds.  Going second also helped as it really brought O-12 to me (burning their order pool to engage) and allowing my limited pool to maximize their use fighting or going after objectives.

Dice also determined the fate in a couple critical roll-offs starting with the failed Infiltration roll for Andromeda.  Had she started in my back field near the console like O-12 wanted, it would have been pretty rough.  Smoke was another big issue with my list but I knew camo, ODD, smoke, hacking, and CC would make for some very large gaps in my list.  Luckily for me in this match up, I didn’t have to really contend with a lot of those situations or was able to use the layout to my advantage.

While this list was really made to play with a bunch of Zuyongs, there are some good concepts going on: 10 regular orders, 2 tac aware, and NCOs for Lieutenant orders make for a surprising amount of actions.  Throw in that the tac aware and lieutenant orders can be used in the links and 2 links make up 70% of the list and you have a lot of internal efficiency going on.

Defensively, the list is robust as well. There are 18 wounds in this list and if the enemy spreads the damage around, they could do as much as 8 wounds of damage and the list will not lose a single order.  Likely no one is doing that but at the end of the day, I took 6 total wounds in this match and had only 3 troopers go unconscious.  If the Paramedic was on the left side of the table, I could have likely brought some of those troopers back up. I’ll have to experiment more with a list like this as it was fun in its tight/compact style.