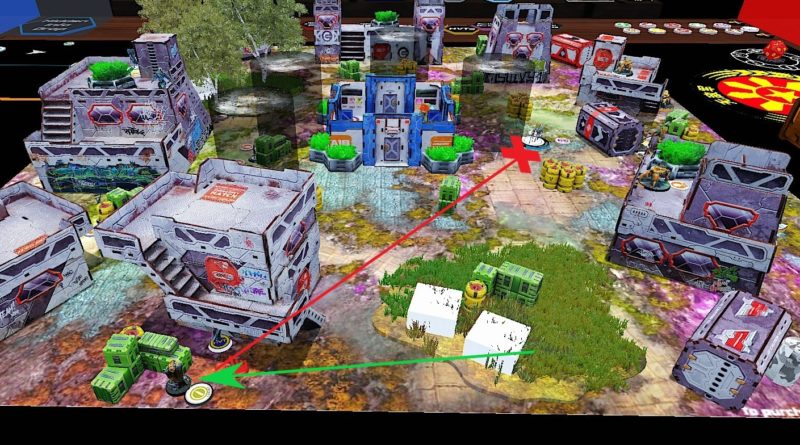 Note: we messed up scoring and only did 1 pt for holding at the end of the round, and 2 for holding end of game.

My opponent had far better tools for fighting in a fishbowl than I had. This included a core team with an MSV2 Multi-Sniper (Haidao), and a missile bot. He deployed his core defending he very open left side of the map. For some reason he chose to leave the missile bot down instead of aroing. He deployed the remainder of the core team on and around the large building on his left. He then deployed his Harris team around the shipping container in the centre of his deployment. His flashbots were deployed on his right flank, with the one on the building hiding prone (likewise the nearby baggage bot was also deployed prone). His Daoying hacker Lt was hidden behind a crate on his left flank.

Finally, my opponent’s hold back (the Zhencha) was deployed up his left flank in some trees.

I counter deployed by putting my Gangbuster and Siriusbot up as far as I could while hiding. The goal was to provide some deterrent/ coverage for the Armory. The Sirius hacker deployed behind a box in the trees, staying within 8 of her bot. I spread out my Varangians and Kytta, mostly hiding but also providing short range coverage should my opponent push up. Likewise my Epsilon and Pavarti hid in the rear not wanting to risk an Alpha strike. The Raptor and his bot also stayed back to stay safe and ready to move up in my turn (the Zero-G on the bot and Raptor would be useful for getting in the room quickly).

I deployed my millicent hiding on the roof to threaten guided missiles, and “defended” it with my Omega Special Operative (actually Cho). My Cyberghost hid behind some crates on my right flank. In the past I have hidden him more, but often found that led to me not being able to use his pitcher how I’d like.

Finally I deployed my holdback, Andromeda. With the open board, exclusion zone, and going second I didn’t have a good place for her. So I chose to throw her down my opponent’s throat and force him to deal with her. I knew she’d die. But at least I expected to drain some of the many orders that my opponent had.

The turn began with the Zhencha advancing up the board and firing a panzerfaust into Andromeda’s back. Luckily the shot missed an Andromeda used Alert to turn to face the Zhencha. The flashbot on the opposite side then moved up and flashed Andromeda (but again failed). One more order, and Andromeda was left stunned in the open. The Zhencha continued up and completed its classified objective.

The Harris team then began moving up towards the room, killing Andromeda on their way. The Harris entered the room and Krit only just avoided taking a free hit from the Siriusbot’s heavy riotstopper.

Krit ignored the bot and grabbed an item from the box while the team moved in to help secure the room. The Shang-Ji stayed outside and broke out of the team by entering suppression.

The Zhencha then continued up the board, taking flanking shots against various O-12 models as he went (failing to kill any of them). As he proceeded around the back he strayed to close to a Kytta while shooting and got isolated and immobilized by the hackers.

While engaging the Zhencha the Gangbuster chose to make a suicide play by throwing out a madtrap, but was ignored and lived.

The Varangian behind the central building impetuoused forward and threw out a smoke grenade while being flashed by a flashbot. The Epsilon then advanced forward, killing the flashbot, before engaging the Shang-Ji through smoke. The Shang-Ji took a wound and failed guts behind the armory.

The Sirus team then advanced, moving the bot to within 8 and into the line of fire of Krit. The Haidao and Krit both dodged (avoiding the Madtrap), and the Sirius isolated the Haidao. The Epsilon tried to shoot the now standing Haidao, but realized it wasn’t very order efficient and allowed the Raptor to trinity it’s brain to pieces. Krit ended up being super bricked after suffering a failed save from carbonite and a heavy riotstopper (Imm-A + Imm-B hurts much more than Imm-B + Isolated).

To start the turn the Shang-Ji advanced up the left flank under the watchful view of the Haidao sniper. He engaged the Epsilon and knocked him unconscious.

Finally, the Shang-Ji advanced up the field to pin down the units just outside of the room.

At some point in the turn the Zhencha tried to reset and merely ended up collecting the remaining token (targeted).

The Cyberghost began by shooting out a repeater near the Shang-Ji. However after a number of failed hacking attempts the O-12 forces decided to try other means…the tinbot had proved to be too strong.

With the help of White Noise thrown out by the Cyberghost, the Raptor advanced on the Shang-Ji while impersonated. After a couple order the Shang-Ji was unconscious and the Devabot was dead.

Before the turn ends Pavarti gets the Siriusbot back into working order with the help of her yudbot. Finally one of the Varangians advanced up the board to suppress outside of the door to the Armory.

The Invincibles spent their turn using paramedics to revive the unconscious Shang-Ji (unfortunately they were successful), and standing up models to use as AROs.

With the Shang-Ji, Haidao Sniper, and Missile bot guarding the room, getting into it would require some careful movement. Unfortunately the Varangians failed their smoke throws leading to them being stunned in the process.

Fortunately the Raptor was able to cautious move into the room and grab +4 Arm from the Panoply (however having taken a wound he didn’t want to risk dying for any more fights). Pavarti then brought her yudbot back through the one smoke that was successful and unstunned a Varangian (dying in the process to a Shang-Ji). The Varangian then threw more smoke to allow the Sirius to get into the room safely.

The Sirius moved to the panoply and failed her roll…rolled again…and failed again.

With that failure we tied on panoplies leaving the game 5-3 (at the time we thought it was 3-3 because we had scored the game wrong all game).

Surviving the fishbowl against an army with a lot of good long range guns was tricky. I think having the mix of smoke and white noise was crucial for being able to avoid the scary AROs and to get into more advantageous fights. Having the Armory in the middle helped, but it essentially led to both side hiding in the shadow of the Armory for most of the game.

My biggest mistake was mixing up scoring (thinking it was 1pt per turn holding and 2 at end of game instead of the reverse). If I had realized the scoring I likely would have pushed in sooner, or at the very least targetted and guided missiled Krit to death.