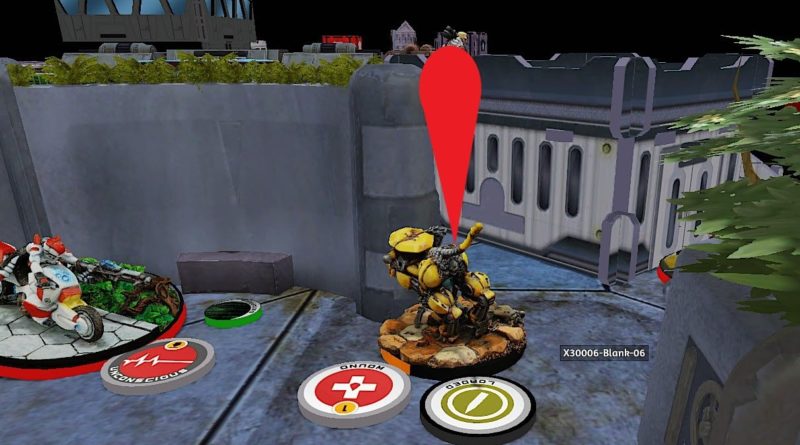 See below, final version at the end of the report

My deployment was very straightforward (I didn’t have much to deploy). I deployed the few non-fireteam, non-Su-Jian models in my right quarter mostly hiding. The idea was that if I could Alpha strike hard enough and then simply turn on one quarter I could keep all my units alive (the rest were HI or my uberhacker).
I then deployed my Core centrally and set-up to provide a little bit of AROs, but in positions where the HI could fall back or be hard to see if wounded/knocked unconscious.

Finally, I spent a command token to hold back both Su-Jian and deployed them on my left flank ready to dash up using the  compression zones to strike at his right flank which was largely motorcycles that were relatively easy to draw lines on. I was trying this list in keeping with the Loss of Lieutenant Alpha Strike challenge so wanted to see how hard a duo of Su-Jian could hit an enemy by sling shoting each other up the board.

My opponent, who also had an Alpha Strike list, deployed his bikes on his right flank hoping to hide them and keep them alive. He then deployed his harris on the left flank hoping to provide some power to the flank that didn’t have all of his fast moving bikes. Otherwise most things hid near the back. I am not sure why he chose to keep his Ryuken HRLs prone/hidden, but was happy that he did as it allowed me to easily advance up the board with my Su-Jian duo. He may have expected a Rui Shi or something as a holdback (instead of 2 Su-Jian) and was concerned I’d use the MSV2 to take out his only long range guns.

In true Alpha Strike fashion the Su-Jian duo raced up the board moving 8-2 or more (decompression bumping it to 9-2, or transforming making it 8-4). As they moved up the spitfire scaled some barrels and took out the first of my opponent’s Aragato’s as the shotgun triggered the enemy Ryuken’s mine (sadly failing the save).

The Shotgun then slingshotted himself up as the spitfire tried to take shots at Kyoshi who had deployed more visibly than my opponent had thought. Luckily the enemy hacker failed to hack the shotgun Su-Jian (who had forgotten the hacker was hiding behind the wall). Kyoshi survived and dodged out of the Spitfire’s view. At this point the Shotgun transformed back into Cat mode, dashed 8 inches to see Kuroshi, and the remaining Aragatos (Spitfire and hacker). The HSG spread it’s shots and took out all 3 bikes.

The two Su-Jian then performed a coordinated order and blasted Yojimbo to pieces with their panzerfausts.

I ended my turn with the Spitfire Su-Jian largely hidden, and the HSG hidden other than watching for the Ryuken HRL to stand up. My opponent started his first turn with his right flank all but lost, having lost 5 of his 13 units with another very locked down…in my mind a very successful Alpha Strike.

Importantly for the mission I had a substantial step towards more points surviving, and had the Spitfire well hidden controlling my far left quadrant.

Bottom of 1 – JSA: Playing the Objective

After my first turn my opponent quickly realized that he had to play the mission, and abandon his right flank. He began by moving up his harris unopposed towards the console on my right (his left). He activated the console and turned on his left flank cooling unit (which covered most of his surviving models).

With the few orders he had in group 1 he moved his doctor to take a long medkit shot to try and bring back his Aragaoto spitfire. He missed the shot and realized it was a waste of time. After the game he regretted not putting fairy dust up to support the Karakuri using the EVO as he had planned.

The Karakuri then moved up and took some shots at the panzerfaust Wu-ming (who dodged). The Wu-Ming took a wound and failed his guts to hide.

Finally, my opponent moved his left flank Ryuken to watch my Su-Jian that were hiding on his right flank (hoping to avoid turn 1 happening again).

Realizing the threat of the Karakuri (both in killing and holding zones/ pushing buttons) I moved to eliminate it. I began by moving up my flash pulse bot to be within 8 and out of lof. I then began hacking it with my Zhanying, eventually isolating and carbonniting it.

I then advanced up with my fireteam, taking shots at the Karakuri knocking it unconscious, and then continuing up to get closer to the consoles and to deal with Yuriko who could easily recover the Karakuri in my opponent’s second turn.

I moved my team around to set-up for my opponent’s turn (although didn’t watch the consoles enough), and took out Yuriko with my SMG/Chain rifle Wu-Ming.

Bottom of 2 – JSA: Killing isn’t Everything

Again focussing on the objectives, my opponent ran his EVO bot up to the centre console (which I had failed to cover) and activated the console and his right cooling unit. He then shifted his left flank HRL to watch the first console that he had activated.

Finally, he stood up his right flank HRL and took a hail mary attempt at killing my HSG. He failed to do a wound and in turn died to the Su-Jian’s HSG.

Realizing that I had to complete objectives I ran my Sophotect up, taking out the EVO bot on the way. The Sophotect switched ownership of the cooling unit by activating the console, and completed my classified by setting d-charges on the barrels near the centre console.

I then moved up my Uberhacker (carefully avoiding the watching HRL who my HMG had failed to discover) and tried to switch ownership of the other console. Unfortunately, on my last order I failed the WIP roll to activate the console. I ended my turn comfortably holding 2 quadrants, with the Sophotect providing a significant amount of points in a 3rd.

My opponent, short on orders, couldn’t really come up with a plan to save the game. He moved some units around to try and hold quadrants. Finally, for the fun of it his Kempei ran into cc with my Zhanying who dueled him, para ccw to para ccw. In the end nothing came of it (aside from him losing his close left quarter as my sophotect out pointed his Ryuken).

I don’t usually like Alpha Striking, I find it can often cause me to tunnel vision on murder and cost me in the long run. However, in this game I was able to perform a successful enough Alpha Strike to sufficiently cripple my opponent. Had I been playing a more balanced list (i.e. not had an HI core and instead had more units including some midfield specialists) I would have likely been able to capitalize on the first turn more effectively. Even without that I was still able to hit my opponent so hard that they were on the back foot the entire game.

I think in the right circumstances alpha striking can be very effective, but you shouldn’t plan to alpha strike. I think it is good to practice, and be capable of, should your opponent leave the opportunity open. Had my opponent put his Ryuken up as AROs I would likely have been unable to have the alpha striking success that I had.

Following the game my opponent and I discussed the strengths and weaknesses of the mission. It is heavily inspired by Frostbyte, but I wanted to remove the datatracker holding the central zone because I always disliked that aspect (killing the datatracker was way too swingy).

Overall we both liked the concept, including bringing in the Uberhacker to provide armies an alternate way of breaking the cooling units. Also, I intentionally changed Uberhacker from Mindwipe to allow Mary Problem to be the Uberhacker, although it did make it so all units that don’t actually have a device can’t be. In hindsight maybe I should have just made it, “any models that have access to the Oblivion hacking program”, although that would cut out EVO hackers (which probably wouldn’t be too bad).

After trying the mission my opponent and I both agreed that having the consoles aspect and a quadrant control aspect was too much for one mission and required too many special rules to keep track of.

I revised the mission, this time to focus more on consoles and cooling units, and tried it again (this time IRL). Overall the mission played much better, and kept the Frostbyte feel without some of the big swings I always found Frostbyte suffered from.