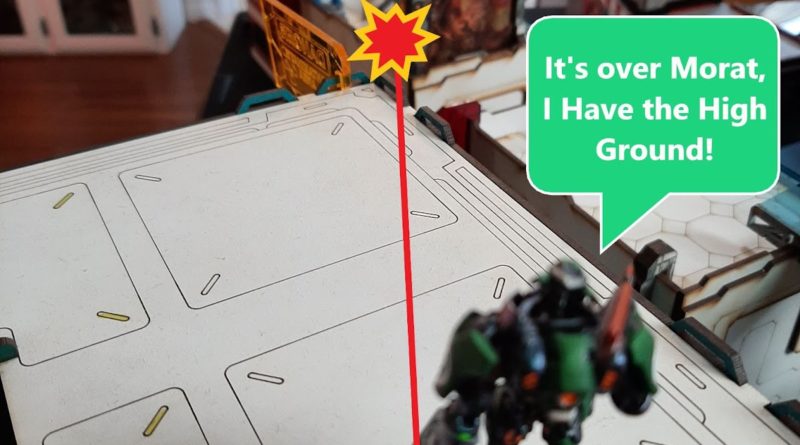 My opponent deployed with a Q-Drone looking down over his left flank A fairly large area protecting the antenna on that side, some approaches to the centre antenna, and his console. Also on the left side was his MBH (who rolled mim -6), his Umbra Legat Spitfire (his lt) and some unidrons FOs to help provide additional defence.

On his right flanks he deployed his Dr. Worm and slave drone, two more Unidron FOs, and his core team. His Core team was an all Rodok fireteam which included an HMG, a missile launcher, a paramedic, a boarding shotgun and on other rodok. The odd DZ and his lack of models deploying outside his dz really forced him into weird corners. He made a few odd choices (like having the Unidrons standing (even the one on the roof with the Q-drone)) but otherwise set up fairly hidden and protected

I counter deployed by hiding my Dragoes behind the 10 inch tall building (this will come up) on my left, planning to keep him safe until my turn. I also placed the machinists palbot on that flank to support the Dragoes (and ideally complete my classified to repair a str). I then added additional protection in the form of 2 fugzai, and 2 regular minelayers. My original plan was to put my Tikbalang on the other side, but after seeing his hold back decided to try and have fun and use the super tall building with the Tikbalang.

My right flank was made up of my Core team and back up regular, with only the Sniper standing (prepared to die to Rodoks but hoping to possibly take one down with the very long range if not slow them). My Lt hid on the building and the rest of the team took up defensive positions. The machinist and MBH joined them. Unfortunately my MBH only got a panzerfaust.

Pretty quickly the Rodok engaged the Bagh-Mari. After a couple orders the Bagh-Mari went down freeing the Rodoks to advance. They long skill jumped the gap to begin taking up positions on the building further up.

My opponent then turned his attention to his left flank and moved up the Legate (trying to discover my forward mine) but failed. After trying with a few things and failing he ended his turn by putting the Legate in suppression.

Bottom of 1 – Shock Army of Acontecimento: I Have the High Ground!

My opponent hadn’t really advanced too much, and aside from taking down my Bagh-Mari hadn’t taken anything out. With the lure of the 10 inch tall building calling me the Tikbalang activated and I began my best Obi-Wan impression. Thanks to climbing plus, the Tik was just away from cresting at the end of its tactical awareness order. It then began using the other buildings to find angles and reign fire down on the enemy knocking out a combi rifle Rodok, a unidron and the Legate. It only paused after engaging the Q-Drone over 32 inches and being crit (luckily passing both saves).

Trying to deal with the MBH before my opponent shoved him down my throat, I reformed teh core team and attempted to spec fire some grenades using the Regular hacker. After 2 attempts I hit once but my opponent passed the save. Activating the second group, I moved the Dragoes forward, dealing with another Unidron and entering suppression looking at one of the Core team’s possible advances.

Finally, rather than falling for my bloodlust and desire to try specfiring again, I activated the Tikbalang and had him retreat off the roof to hide on the side of the building. Fortunately his parting shots into the Q-Drone were successful and knocked the bot out.

Having unknowingly put my opponent in loss of lieutenant by taking out the Legate, my opponent was forced to use this turn to regroup. Luckily the four remaining Rodoks still provided regular orders thanks to being veteran. He began by advancing up one of his two remaining unidrons, and activating his right most antenna. He then advanced the MBH up, blanking on the mine, and dying in the process. I will note that my opponent hasn’t played since N3 and I tried to get him to take it back but he insisted that he wouldn’t learn if he didn’t suffer.

My opponent then revived the unconscious Rodok and reformed the fireteam. HE then moved the team up in the shadow of a poster and moved the missile launcher out to engage the suppressing Dragoes (he was concerned about the HMG being able to actually punch through the TAG’s armour. Luckily the Dragoes stayed strong, won the fight, and knocked out the Rodok. Without the orders to heal the missile my enemy ended his turn in a dangerous position

Bottom of 2 – Shock Army of Acontecimento: Cleaning Up and Preparing for Retreat

Seeing my enemy in a precarious position (but also being aware of the danger of retreat) I moved in to finish off my opponent. The Tikbalang once again flipped to the top of the building, gunning down the Rodok HMG in the process. The Tikbalang then moved out, firing up at two more of the Rodoks before popping out it’s crabbot to activate the central antenna. In a miraculous event the Crabbot activated the Antenna on its first attempt.

Trying to get to my right flank antenna in order to get control more (seeing that at this point retreat was almost a certainty), my MBH advanced up firing at the remaining unidron on that flank. Once within 8 the bike made a suicide dash with its last order but failed to successfully activate the antenna (dying in the process). Finally, the Tikbalang came down from its tower, moving up killing Dr. Worm and securing the enemy console.

My opponent started his turn in retreat and had a single hail mary play to tie limit how much I won by (I had scored a point for holding his console end of turn 2, but killing the Tik would lead to only a 1 point victory for me). His Unidron turned around an unloaded on the Tikbalang. The Tikbalang killed the Unidron with it’s heavy flamethrower and suffered only 1 wound in return.

Bottom of 3 – Shock Army of Acontecimento: The Turn that Never Happened…

The game ended the turn before, as my opponent entered into retreat…

This game was played at a friend’s house who has been building up quite the tables over the last few years and the board definitely had a lot of it. That being said the table still had quite a lot of long firelanes available. This was especially true thanks to the Tikbalang’s ability to scale the building easily.

Having the two TAGs definitely lead me to feeling a lack of midfield specialist (normally I like a NAGa or two) for pressing the midfield buttons. However, the hitting power and defensibility the Tikbalang and Dragoes provided really forced my opponent to play cagily to avoid being obliterated. This was exacerbated by the saturation zone in the centre reducing the ARO effectiveness of my opponent’s missile launcher (the one good tool he had for taking on the TAGs).

Having the Drgaoes in the second group as a minimal order long range artillery piece is a piece of tech I have shamelessly stolen from Rob Cantrell and have really enjoyed using it in SAA with the Dragoes, and O-12 with the Zeta. I really find using these long range main battle TAGs as long range support artillery really allows you to deal with the threats you need to from range, without cutting into your main pool. These TAGs often only really need a few orders, at least in turn 1, and can always swap to group 1 in later turns. The power of the HRMC is particularly present in Power Pack as it maintains a burst of 4  even going through the suppression zone.

The Tikbalang on the other hand often want to have more orders behind it, allowing it to leverage it’s mobility (including climbing plus) to get nasty shots off before retreating and hiding before your opponent responds.

Ultimately, in this game the two TAGs dominated and controlled this game. That being said, I was very lucky that my opponent didn’t bring a hacking threat. Even having a mild hacking defense would have caused a major slow down of my assault and may have delayed me enough to allow him to survive to have a real turn 3.

One thought on “It’s Over Morat I Have the High Ground!”