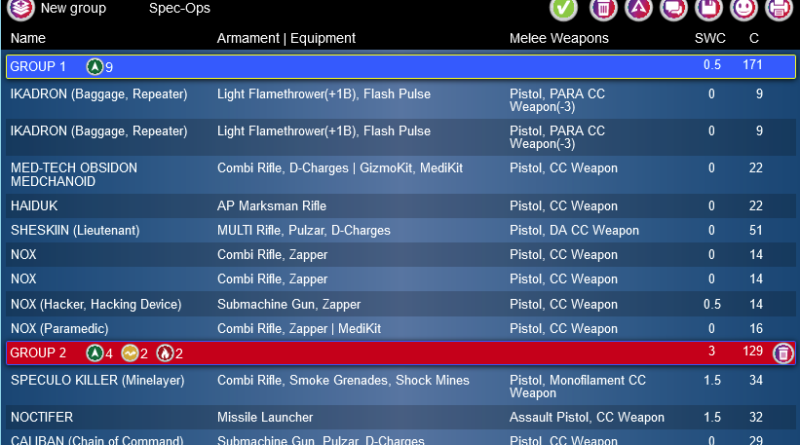 A local warcor organized a small winter Infinity tournament nearby that my wife and I decided to attend. The mission lineup was Frostbyte, Countermeasures, and Biotechvore. I opted to run Shasvastii to have a sectorial to ease order usage in Biotechvore during the first turn evacuation. Frostbyte requires HI/REM/TAG to claim the zone so I did the sensible thing and ran a Sphinx in that list. I made the other list for Biotechvore a few months ago to test and it happened to be perfect for the Rule of Threes mission, it almost came in at the 3 or under SWC as well.

The start of the list was Sheskiin and her Nox friends. As Biotechvore puts forces close and cover may be less available with cross table firefights, I wanted the Multi-rifle light infantry version with Nanoscreen. I took a Haiduk and a Noctifer Missile Launcher for defense should I go second, or to help shoot my way out if I went first. I added a Speculo Killer Minelayer for a 50/50 chance at a surprise, a Caliban Chain of Command to let me be aggressive with Sheskiin (and a nasty late-game piece if needed), Dr. Worm, and some cheap orders/utility with Taigha and Ikadron. I included Aida as a potential answer to Lions, Tigers, Wolves, and Bears, or at least the ‘pode version of the last 2. I like her as a mid-range defensive piece as well with Mimetism-3 and an SMG in suppressive fire, she can be difficult to dislodge by less exceptional troops.

Game 1 – vs. Caledonia in Countermeasures

My opponent won the lieutenant roll and opted to go first. Knowing I was going second, I dug in with Taigha/Ikadron corner guards, the Haiduk and defensive turret looking sideways across the front of my deployment on the lookout for wolves. I placed the Sheskiin link centrally to be able to go whichever direction was needed, and the Noctifer looking over my opponent’s DZ. My opponent covered a long lane with a camo token (Cateran Sniper), his primary attack pieces were a Haris of Scots Guards, a core link with a Grey HMG, Uxia, and McMurrough. He failed the infiltration roll with Uxia so she had to start in his DZ who I promptly placed my Speculo near and covered with a mine.

The first turn saw him needing to deal with Bob from Accounting, AKA the Speculo close to his lines. He did so with McMurrough, allowing him to accomplish a classified objective for dragging her unconscious body along for the ride. Thankfully, it cost him enough orders that it blunted his first turn attack. I got a perfect shot at an SAS who issued an entire order to return to Camouflage state in full view of the Noctifer but the Noctifer missed and got put down by the Cateran sniper for his troubles on the next order. Spoiler alert, he made up for it in the next game. My opponent pulled a nifty trick with McMurrough, speculatively lobbing a grenade to catch 2 corner guards from out of LoF as he entered my DZ but was running low on orders after that. On my turn, Aida deleted McMurrough with her anti-werewolf COVID pistol, Sheskiin went to work doing Sheskiin things, and turned the tide, but over the course of the game, my opponent was able to get a few objectives each turn and dice luck cost me quite a few orders when I went to get cards (5 orders to hack spotlight on 13’s and whatnot) putting me behind 5-1 going into the last turn. I pulled all 3 cards available but that still only brought me to 4. On a funny note, in retribution for my poor objective luck, the dice gods let my Taigha eat Wallace with a chain rifle blast, dodging into melee, and berserking him down. In return, the Taigha made 2 of 3 saves against Wallace’s EXP CCW which allowed my opponent to get a coup de grace for his 5th card… the irony.

I won the Lieutenant roll and opted to go first fearing that my opponent would have Andromeda. I was rewarded with a Gamma Fuerbach looking down some critical advancement lanes and cover I would have to cluster up behind (cue the ominous music).

For how gnarly the deployment looked to start with, the game flowed quite well in my favor. My Noctifer made up for his abject failure the last game by taking out the Gamma in 2 orders with range in my favor forcing him to dodge and him not succeeding. This let me get out of my deployment zone without much difficulty but I had to pack behind what cover I could find in the middle. My opponent saw the opportunity I gave him and pulled a bluecoat to where he could hose down 7 of my troops with a heavy riotstopper, oh the glue-manity. I managed to dodge with 3 of the troops, one of which was Sheskiin who was set up on the corner perfectly positioned to jump into melee with the offending bluecoat. This was a bit of a trap, the bluecoat has Natural Born Warrior and a CC-6 ability putting Sheskiin at a mere mortal value of CC18 to the bluecoat’s CC20. As always, melee is dicey and Sheskiin won the roll-off, eating the Bluecoat and then running the table from there with her protheon power-ups in the final turns.

I had a good run with the lists, managed a 2-1 record, and won the tournament on tiebreakers. I had nearly 750 VP’s across the 3 games so considering I played 2 of the 3 games with the list that had no high burst weapons, I think you can manage some really good results if you take the time to consider these types of options in your lists.

Obviously Sheskiin is a beast in-general and the Red Fury version probably gets more play, but I really like the multi-rifle profile. In a full 5-model core link, she can hit at BS21, Damage 15 AP/Shock, or DA on ARO return fire. Damage 15 AP with those stats makes short work of TAG’s and other heavy armor pieces. With stats like that, she can even go after models outside of good range on BS15 out of cover, or BS12 in cover which isn’t ideal but if she is up to 4 wounds with Protheon can be a viable option. Speaking of which, she always seems to want to be moving forward to leverage her melee prowess so I find I often only need to make one or two long range shots per game.

Noctifers are hit or miss pieces, but at 30-ish points, they aren’t a huge point investment and they cover the short range problem the rest of the list has. As I wrote about in the overview, Aida also is a problem solver that I quite like. SMG’s with mimetism scream to be put in a position to cover a short lane in suppressive fire. She isn’t the Mimetism-6 X-visor problem that the Ryuken-9 are in JSA, but she is a light version with other upsides like the viral pistol for handling pesky Ariadna beasts.

Overall, I’m not always reaching for high burst weapons, they are costly and can be overkill depending on the job. With proper application of modifiers, stats, matchups, and list composition I find lower burst weapons to be quite effective.