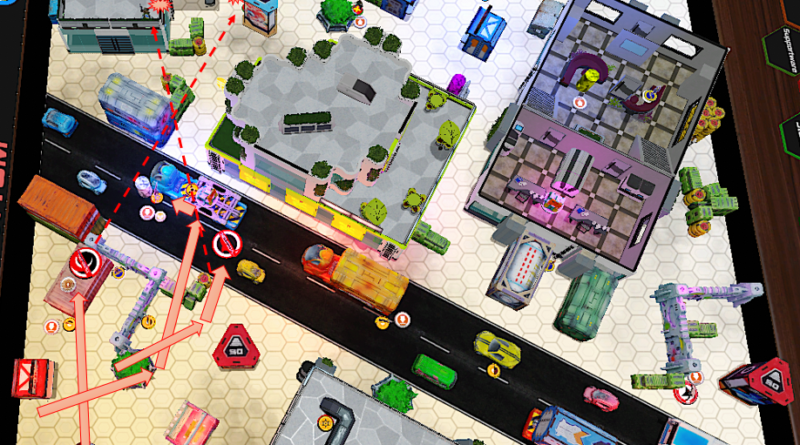 This was a mentoring game to help my opponent with his career as an Infinity player. We didn’t expect to see a competetive matchup, but I introduced the new concept of Link Teams to him and we discussed most of the opportunities he had. One difficulty were the camo units, since I didn’t know what was below them.

Going into a deeper analysis of what happened in this batrep seems like a perfect addition to me.

The Idea of the current Bromad Mission is to evaluate low bust weapons. So I thought about them and how to best utilize them. Low Burst (Missile Launcher, Feuerbach, MK12, Shotguns) means in my list they provide a high threat. I assume they are best used in ARO but still provide good use in offensive. I don’t need the “Win more!”, because one hit is probably (hopefully) enough. Therefore I was interested to try a Haris of Tsyklon (Feuerbach), Vostok (Mim-6; MK12 + 1 Dam) and an Evader (Engineer; Boarding Shotgun). They all have Climbing Plus which might come handy, the engineer synergizes well with the remotes and is a specialist.

The Plan with this Haris is to move forward, grab objectives and be able to stay there and not have to withdraw, because they provide a dangerous ARO Zone.

Besides this main idea in this list, my deployment is characterized by a classic defensive Core Link in the center with a durable HI Missile Launcher watching the table and everybody else hiding. Additionally the rest of my list is spread over the map.

As mentioned, before this was the first time my opponent used Link Teams. We placed the Core in the center and covered some short firelanes. Beside that he did spread his Camo Units across the board with the (yellow) specialist being close to the objective. That being said, he felt it was better to mark corresponding camo with the same color for his overview.

The plan was to move the Haris to my left objective and put them in a defensive position. But the Camo on the roof of the building is staring at me and will get to ARO. I’m afraid it might be a Spetsnaz Sniper and I don’t want to give him free shots at my other link members. So I move the Vostok who is currently the only one seeing the camo out of LoS and try a discover -> Succeed it is a decoy…. I was lucky to reveal it in the first try (50/50?). Otherwise this would have been very annoying and distracting, so I liked that spot.

Now with the decoy gone and the other Camo only having LoS to my Tsyklon I give him Assisted Fire and move the whole Haris forward, trying to discover the second Camo. This fails this time. But that is no problem, I have the Vostok in place to gain LoS and the Camo reveals for a shootout. Uhh, it is a Vassily with T2 Marksmanrifle. I don’t feel very comfortable, because this gun provides some threat as well. The shootout appears to be exactly the way I don’t want it with low Burst. 8 rolls on my side and just one hit….

My opponent doesn’t roll any better, and I’m able to remove the target. but that is exactly where I feel low burst is a problem and I will dive into that in the post game analysis.

After that I start positioning my team, grab the objective, the Tsyklon reveals and removes another camo.

I have to mention here that my discover rolls were good. I revealed multiple camos where I already had games where I failed to discover a decoy with 6 orders.

We identify that Vassily was the Lieutenant, but we agree for the sake of training and trying things we ignore this. My opponent was reevaluating his placement for the next game.

We discussed the options for my opponent. The easy part is to grab the objective on his left with the orders of group 2. Then he decides to move the offensive core to attack my Haris which is protecting my Designated Target, which is a reasonable plan.

He starts shuffling his Core to move and keep coherency. He then aims for the Tsyklon with his Veteran Kazak and removes the bot thanks to the T2. He then dodges the mine and tries to shoot the Evader who survives and fails guts in total cover. With all that moves he avoids the Mobile Brigada ML.

Ok, I can’t really reach any of the consoles. The right one is difficult to reach, since we agreed that we can shoot through the glass windows, but not move through them. I would therefore have to climb on the building ang go down the stairs again -> too far. The center objective is still covered by the Ratnik and a Camo. Therefore I will go after the Core Link and try to kill at least one HVT.

So the Frontovik has to be removed first and it is about low burst, let’s try the Evader with his Boarding Shotgun. Bust 2 vs Burst 2 is always a gamble. And the T2 Rifle of my opponent doesn’t help. The Evader is removed in that play. (even though the odds were not that bad)

Ok, I’ll try the Moran, he has at least more burst. The Moran moves forward into cofer and faces the Frontovik for a shootout -> Frontovik goes down this time.

The last notable play this turn is the Mobile Brigada shooting at the Ratnik. He is outranged and I’m usually totally happy to engage an opponent in this case with my Missile Launcher. Two dice are swingy as always, but the opportunity is just extremely high and I have a paramedic ready if things go bad (from time to time they go really bad and even the paramedic won’t help).

After that the Vostok swings around the containers on my left flank and picks one by one, killing nearly all enemies and the HVT.

My opponent is in Retreat and we agree to just go into a post game analysis.

Funnily my opponent had a low burst list as well, even though this was not intended. My conclusions about low Burst:

One thought on “Robo Haris”