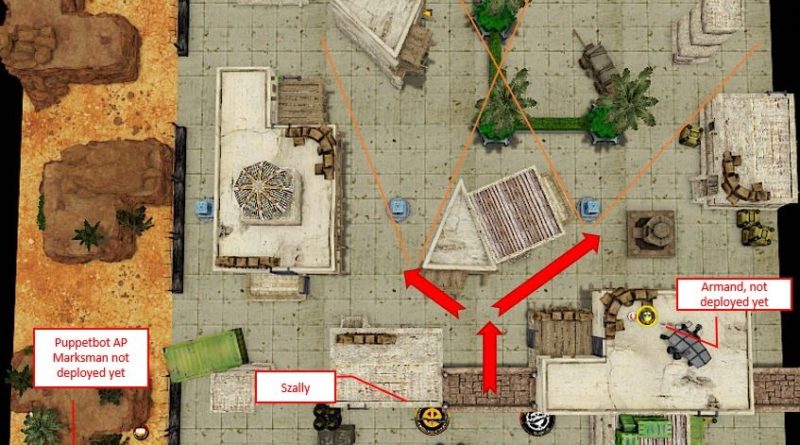 The game including an explanation of my deployment strategy and as post game analysis of my gameplan is recorded in this video:

I honestly did win the game because my opponent made two mistakes during deployment which did sum up too much during the game and he couldn’t recover from there.

But according to the mission of holding two units back, there is a lot to talk about in this setup.

I regularly hold two units with my vanilla factions if I have the first turn. I think it is a lot easier in vanilla (and yet another reason I prefer vanilla lately), because I don’t have too much need for the Command Tokens. If I do this I have the first turn and most likely have to deploy first as well. And that is usually where the shaping of my opponent starts already.

I hold back the Puppetica Company and Armand ‘Le Muet’ but deploy the Szalamandra TAG and a Motorized Bounty Hunter at the same time. And this should create mental load on my opponent:

Mental load can cause errors and errors on the opponent side are the first step to victory.

In this game I placed both of the mentioned Units in the center of my deployment zone and by that putting weight on the open area.

That is what my opponent can react to with his deployment. If he doesn’t bring enough ARO, I can freely move over the board. If he deploys ARO pieces, I”m confident that I can react to everything with my held back units:

In this game my intention to have the left flank defended lightly and attack pieces placed there turned out well, due to my gap in my deployment. This way my attack of the Puppetbots can disable my opponents opportunity to strike back.

Armand showed another capability why I like him. As a hold back unit he can utilize his Forward Deployment 4”, extremely well. In this game he can be deployed on top of the building where he provides a lot of offensive and defensive fire lanes and has the high ground in his favor.

For me the opportunity to hold back two units for a coordinated alpha strike and shaping my opponents deployment is the key for starting in my deployment zone.

2 thoughts on “Shaping the opponents deployment”