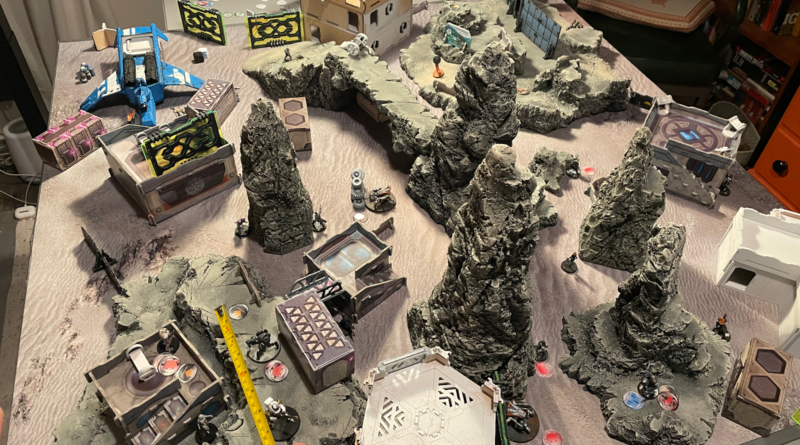 I’ve been getting quite a few games in with the new fireteams, and I’ve been lucky enough to have been able to do all of them in person, rather than with TTS like I had been doing for quite awhile.

A lot of these games have been within the context of teaching a new player to play infinity, which has given me some opportunities to try quirky lists and put new teams on the table (hello monk haris). As my new player has accelerated his skills at an incredible rate, this playful freeform has shifted a bit to narrow in on RCR practice—trying to hone my specific lists.

With the fireteam update, one of my initial assumptions was that the update as a whole would serve as a substantial buff to TAGs. Without heavy bunkered AROs to threaten their advance, they would be dominant predators on the battlefield. This assumption has leaned my list building in two directions: 1) anti-tag utility that doesn’t (ideally) rely on shooting the TAG, and 2) a TAG list that brings minimal fireteam support.

Very quickly, my initial assumptions have been adjusted quite a bit. Specifically, my take away has shifted from sweeping assumptions about how the meta will shift, to a realization that these changes really haven’t been as dramatic as I initially assumed. My knee-jerk response was that the day of the pure fusilier hmg fireteam core was back, but now I’m right back where I started with a Haidao MSR in a core link team.

Of course losing a bit of BS hurts his chances of winning in a straight firefight, but it doesn’t cripple him, or even dramatically change the way I play him. Its still smart to pick the right moment to stand, and to leverage every tool at your disposal prior to engaging in a highly important exchange. At the end of the day, its still coming down to dice rolls, and as far as the played experience—those margins don’t leave me reeling or struggling to cope.

So with the dramatic “this changes everything” assumptions put to rest (personally at least, Im sure the debate rages onward), I still wanted to note that the experience of making fireteams and actually playing the game has gotten a lot smoother and more enjoyable. Its always nice when there’s a little shake up, and even a small reorganization of compositions can breathe new life into the game. I mentioned the monk haris before. This was the first fireteam that got me excited. Ultimately my takeaway was that it didn’t justify changing everything else about how I was list building to prioritize this link—but I still had fun doing something outside of my comfort zone. If there’s anything that playing with a new player is showing me, its that there are a lot of interesting things you can try in infinity if you drop your assumptions about how its supposed to come together.

A final note here then, that goes a bit against my “everybody calm down and enjoy yourself” stance—there is one major change that has been dramatic and exhilarating for me personally, and thats the ability for Karhu in White Company to be able to form a full haris. Ive already run a couple tournaments prior to this change with the karhu in a duo and deemed the pair amazing. To be able to throw a 9 point minelaying beasthunter in there and go up to burst 4 on my karhu… it makes me want to cry tears of nerd joy.

So those are my thoughts on the changes. There’s a lot I still want to try in factions that I haven’t made time for. Its a good time to play infinity!