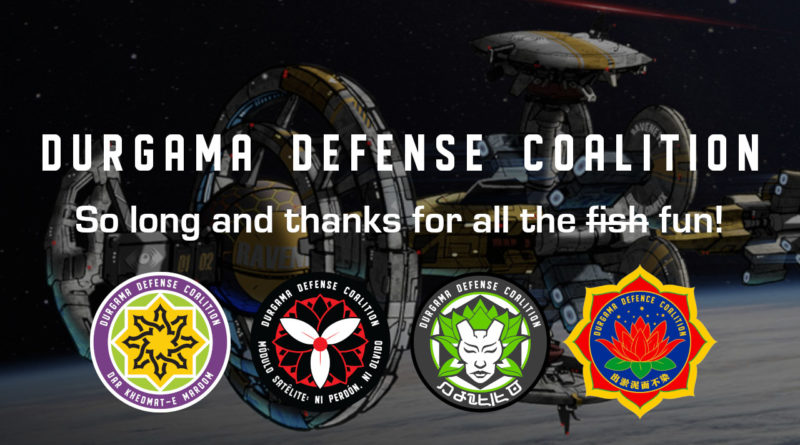 First off, we’d like to give a big thanks to Corvus Belli and On Tabletop for putting together the Durgama Takeover campaign. Of course, the real thank you goes to you–the players and authors of all those battle reports! It was a shorter campaign this year, and thus was pretty compressed. We hope you all had fun and enjoyed the good natured rivalry and memes between factions!

Just a reminder to Coalition members that you have to submit your battle reports to the following Google Form, which will close Saturday at midnight (Pacific Time, UTC -7), to be eligible to get prizes. We’re just looking for the WarConsole link, i.e. “https://durgamatakeover.warconsole.com/battles/wisekensai-vs-yue-fei-1658725502” is type of link we’re looking for.

For a list of the locations, please have a look here:

If you’d like a T-shirt of the designs you can grab one on the Bromad Academy Threadless store! There are lots of colors available, not just what you see below. Make sure to wash it inside out, they do tend to fade and chip a little over time. All the funds from sales will help offset the cost of making the patches, so if you’d like to help out, this is a good way to do it!

As you might imagine, patch design tweaks for manufacturing, waiting for manufacturing, and getting all the envelopes stuffed and mailed will take some time, so please be patient with us. We’ll release updates throughout the process as applicable.

And now, just for fun, some goodbye messages from our various commander characters. See you all next campaign!

To the citizens and soldiers of Concilium Prima and our allies,

The Nation of Haqqislam is distraught at the occurrences of the Raveneye Orbital and Durgama Peninsula where the Combined Army gained significant ground. We put our trust into O-12 and Panoceania and found it misplaced. The so-called “Great Hyperpower” decided to place its limited resources and capabilities in not the defense of Humanity, but in its own interests and in so doing allowed the Raveneye Orbital to become infested in the soldiers of the EI. Yu Jing not only eliminated Combined Army forces from Cameliard, and secured the facilities against further aggression, they stymied a direct offensive. The nation of Yu Jing should be praised in keeping secrets of humanity and the nation of Panoceania out of the EI hands, but instead Panoceania saw this as a challenge and threat greater than that of the EI to humanity, and acted on its own interests. This is of dire concern in all future operations involving the Panoceanian military in joint operations and will request that the Hyper Power stand down from any future leadership positions.

Further, we now know why Haqqislams grave concerns of Equinox infiltration of Darpan fell on deaf ears in O-12. It was due to infighting, sabotage, and betrayal within the very organization that purports to unite humanity. Their orders to have all nations withhold their own troops into their own areas of operations can only be seen now, in perspective, as that of sabotage and assistance of the great enemy. The ICAF was a weakening factor in this conflict and the Durgama Defense Coalition regrets that the great soldiers of Ariadna fell into and for this organization.

The diplomats, and soldiers of Ariadna worked tirelessly in the ninth hour to try and restore Raveneye to human control, and with assistance from the Nomad Nation, both forces were close. It is regretful that they were not successful, and our Nation will mourn their losses as our own. Haqqislam is providing any and all medical assistance to these two nations as it can. Ariadna and Nomads should be lauded for their heroic efforts, and Haqqislam hopes to work to mend relationships with its once close ally of Ariadna.

Talks have begun with ALEPH in earnest, who is beginning to understand the threat of the Equinox Organization due to the sum of evidence brought forth directly to it. While the blood spilled within the Darpan Facility is a tragic consequence, we hope that moving forward, we may work hand in hand and shoulder to shoulder instead of fighting. In recompense, Haqqislam biomedical scientists will work more closely with ALEPH in assistance with advancing humanity and its knowledge.

The Durgama Defense Coalition was a powerful and tight alliance that showed its might and capabilities on the Durgama Peninsula. Haqqislam hopes that in future joint operations with the nations of Yu Jing, the Nomads, and Tohaa can take place with such great results. Further we would reach out to the other nations, to join us, not only in defense of each other, but in the defense of humanity as a whole. Only together can we rise higher than our beginnings and face down the existential threat of the Combined Army. Inshallah!

Sisters and Siblings of the Nomad Nation: We have done the impossible and have held the Raveneye’s Port Battery. May God herself and Saint Mary of the Knife have mercy upon our enemies, since it’s clear they’re unable to stand before our might and determination. On behalf of Nomad Theater Command, I would like to commend and celebrate the efforts of our Commanders for setting an example for the whole Human Sphere. Each of you has contributed your diversity and your unique spark and personality in a way only Nomads can. Thank you for your sacrifices and your victories and know we will continue to stand together.

To all Tohaa commanders operating within the Human Sphere,

Since the destruction of the Daedalus Gate we have found ourselves marooned here, strangers in a land that is anything but strange. Our fate on the edge of the wind, the EI and the implementation of its will, the forces of the Combined army, remain a constant threat to our very being, even as the fate of the home systems remains unknown. We have made overtures to work with the council which claims to speak for the entirety of the Human Sphere, but they have wanted little of us beyond our technology in order to strengthen their own position. Yet, by looking beyond this council, to the nations and people of this region of space, we find hope.

We Tohaa have always found ourselves made better and stronger by the coalitions we build with other like minded aliens within the vastness of the universe. Though this assault by the Combined army has been as ferocious as any we have witnessed, they too lack the numbers they have brought to bare on our home systems. Through our continued alliance with these humans who will truly band together in the face of our collective doom, perhaps it is here, within the Human Sphere, that we may finally blunt and break the spear of the EI.

When the universe reaches its final chapter, may the Digesters catalog the Tohaa as inspiration for all Heralds, and as a dire warning to all those who would become Seekers.

This is Hsien Yue Fei of the Durian Investigation Unit, reporting on behalf of the High Command a solid campaign victory for Yu Jing! We held XianDao and protected our corporate interests, then seized Cameliard from Pan Oceania, safeguarding it from the Combined Army threat and proving to everybody that we truly are Number One in the Human Sphere.

The published results of the second phase at Cameliard are baffling, as it appears that O-12 and Pan Oceanian media outlets have temporarily disabled the AI Historian that normally reports on military campaigns, no doubt as a ploy to puff up some fragile egos. As always, when we have to deal with these untrusted competitors, we will do our own analysis and provide our own trusted news for you. In the meantime, anyone doing a cursory examination of the published reports will see that the only real edge Pan O hold in that location is a brief and incomprehensible prayer, shouted at the last minute from the foaming lips of a religious maniac, full of sound and fury, signifying nothing.

On behalf of the Yu Jing High Command and our forces stationed in the Durgama peninsula, I would like to thank our allies in the Durgama Defence Coalition. I salute you all for your camaraderie, dedication, honour and being the bulwark of the human sphere in the face of the Pan Oceanian failure of leadership and their subsequent retreat to Vikruti Beach. Haqqislam, we thank you for sending your hazmat teams to assist us clearing up the tactically deployed piles of rotten Durian that we scattered around XianDao to scare away JSA and Ariadnan troops. To the Nomads, we thank you for seizing control of the news outlets and making sure our side of the story cut through Pan Oceanian and O-12 propaganda. Tohaa, please do not e-mitter me again.

To all the Yu Jing generals and commanders, you have fought against a larger opponent and shown them that we are more than their equal. Your contributions now go down in history and you shall be rewarded. Remember this campaign as a step on our way to our rightful place in the Human Sphere!