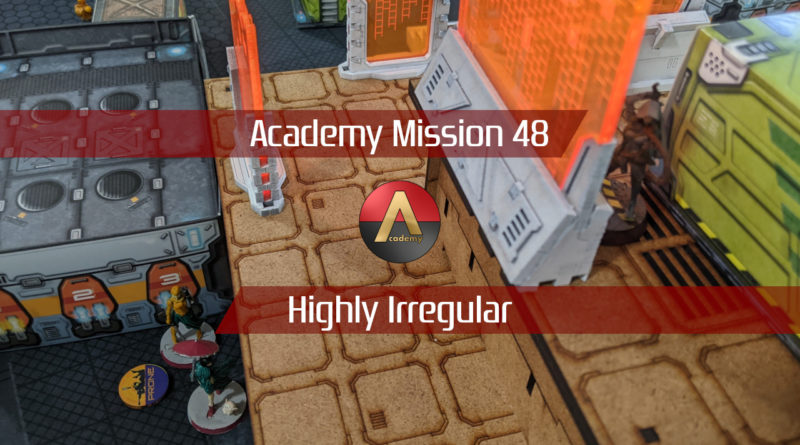 We’ve been running an escalation league down here in Humboldt. This past Saturday I got my 150pt game in with my buddy Scott. I know you mentioned not using impetuous units, but I had to use my biker bro! The mission was Firefight. Here’s our lists:

My initial plan was to set up a repeater network with the hunzakuts and rain hellfire down with my missile bot. Unfortunately, poor Valerya lost a FtF against Scott’s hacker through one of the repeaters the Hunzakuts had so graciously set up for her  and got isolated. I proceeded to flounder for a few orders attempting to reset her out of isolated. Really what I should have done was spent those orders running my engineer over to help her out since he was on the opposite side of my deployment zone. I spent my last order on one of my Hunzakuts to score a hidden objective. Fortunately my Hulang was able to fight the world on Scott’s turn (he took a panzerfaust to the face and lived!) and kept all of his Teutonic Knights at bay during his first turn, but did get himself isolated by the enemy hacker.

During my next turn, I used my Kum to throw down some smoke to cover my Dozer’s sprint across my deployment zone, not wanting to risk another panzerfaust to the dome. He made it to Valerya and got her back in the game. Valerya came back with a vengeance and crit spotlighted Scott’s hacker. Missile bot did his thing and Scott’s hacker was paste. Scott’s next turn his Teutonics Knights ran up to try and deal with the Hulang who was in suppressive, but they couldn’t dodge well enough to get around my bullet spray. The Hulang managed to take one down and stall the other. His last Teutonic knight ran at my missile bot who I’d stood up on the previous turn and exploded after rolling an 18, just barely failing his dodge. Scott then revealed his Trinitarian who exchanged some fire with the missile bot. Missile bot made his armor save thanks to some cover and dropped prone because he didn’t want to play anymore. The Trinitarian ran down some stairs and dropped a mine.

On my last turn, I knew that my repeater plan was DoA and so my Hunzakuts did a couple of coordinated orders, moving toward the panopolies and boobytraping them with mines. They were both able to snag some decent swag, and I retreated them into cover. Scott’s final turn he ran into the Hulang again, but this time his Teutonics were both within range of the only repeater I had on the board, and both got immobilized and then isolated by Valerya who was out for blood. His last order was spent on his Trinitarian in an attempt to grab something out of the panopoly, but he failed his roll. I killed more army points, had more panopoly items and accomplished one of my classified objectives. 4-0 Dahshat victory!