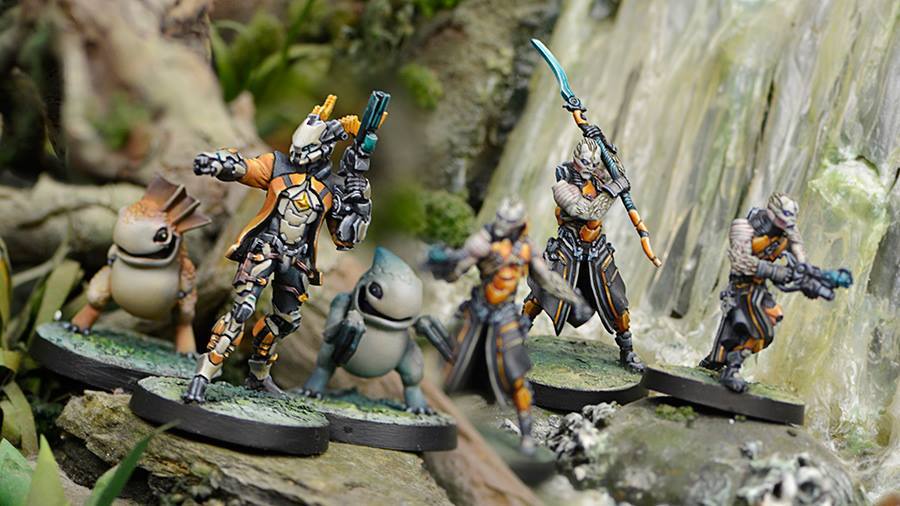 A big thank you to Jorge for writing in with this awesome battle report for Mission 001: Mount Up! — WiseKensai

A group of plaster-face aliens wearing as many layers as an onion is rapidly approaching one of the newly established Arachne relays, claiming to be “making sure that our response time and strength are adequate to resist the EI advance”. True or not, they might be in for a surprise. The force in that sector might not be the best for objective acquisition but it’s fast and has a good kick, Technical Command has some new toys on site.

I’m going all in without medics or engineers, so I need to hit hard first. I won initiative so I can go with Plan A: deploy Securitate Core on one side, Grenzer Haris in middle and Zondnauts on the other side, Advanced Deployment in the middle-ish and Transductor Zond in Zondnauts side. Plan is to cut straight a flank with the motorbikes and advance the Grenzers in turn one to make a diagonal between bikes almost to his DZ, Grenzers in the middle and Securitates back, so they can unleash some hell in reactive turn.

Mary is almost the only objective taker I have with Spector, so she’ll grab a console maybe behind the Securitates when I make them advance. Puppeteer just came to Counter-intel and will stay ducked in the Securitate building, out of sight and blast radius. Heckler will just heck around, obviously, and maybe take a linkteam apart with the E/Marat. We are playing in an urban grid (2x Icestorm Scenery and some CB boxes), taller building in his side and another almost as tall in front, by the middle of the board.

Predominance of diagonal firelines, central plaza with small partial cover. He deployed his ML Sukeul (bugged) triad on top of the tall building (as expected) which was the same side as my Zondnauts (left from now on) but the other building blocks LOF so I can breathe. He’s more worried about the Securitates, MSR and Feuerbach on top of a building, in the corners so I don’t get templated and the rest down behind the building. Gao-Rael triad with Hatail and Makaul in the middle-left, good choice for flexibility on offensive piece and looking to grab objective.

Most importat for me, nullifies smoke play around him. HMG Sukeul with nuli sakiel and Makaul in front of my Securitates on the right (ouch) and his last triad on the middle right with viral Sakiel, Kamael and Makaul. I place my last mini, a heckler on middle right, outside Gao Rael sight and he places his Rasail on the left with a bug, as I was expecting. Spector goes Datatracker for me and Hatail for him.

Tohaa are a tough bone in ARO. Impetuous bikes first. Last time we played my Zondnaut exploded so he wasn’t worried about them this time and no one is watching them. The run forward and toss smoke towards the middle, to cover the Grenzers form both Sukeuls watching form the sides and incidentally breaking the line between securitates and ML Sukeul.

First order goes to Spitfire Zondnaut, almost full move and in sight of Gao Rael. I’m aware he ignores mimetism but there’s no other piece to attack him without drawing a ton of fire. Lonely kamael sees me too and tries and improbable shoot ARO with the Gao, so 1 die to the kamael and 3 for the Gao.

Kamael misses and gets shot dead and Gao loses f2f roll with two 9s against my lucky 11 and also fails armor roll. I need him dead to move the other biker so I spend another order and took him down for good this time. So bike’s worst enemy down, I’m feeling lucky.

Third order I advance tight to the left with BSG Zondnaut and peek around the big building in the side, tossing smoke against the Rasails only shooting ARO because I don’t want the ML shooting at me. Smoke in, fourth order running straight into the Rasail. Chaksa is poorly deployed behind his master and cannot ARO and ML couldn’t
see the edge of the smoke.

Rasail fire and wins f2f but chaksa gets two templates. We all pass armor rolls and I spend a fifth order to dismount and move both a bit so the Zond stays behind and de pilot can’t get hit by the chaksa. Rasail shoots and so does Hatail, who I didn’t notice.

I ignore her and focus on Rasail, both aliens miss their shots and I get a hit and a crit with the shotgun blast, Rasail uses Symbiomate and Chaksa fails both armor rolls. Two orders left on this group, the Rasail contained, I move the other bike and throw smoke into the plaza, last order going in suppressive fire with a building to my left, somewhat beyond the half of the board.

Group 2 has the biggest smoke screen to do what they please, and its good because Grenzers are even slower after playing bikes and take 4 orders to get cover in the plaza, last one with the spitfire on the left shooting the ML Sukeul through a 2cm fireline and taking his bug out.

Another burst leaves him unconscious. Heckler takes the last 2 orders to move to the front right and put a little pressure on the very side of the board. So far, everything better than planned. I would have liked shooting his HMG with the Securitate link but I couldn’t risk soaking al the fire that was looking my way.

Lt order on his Rasail because he’s as good as dead. He moves towards the pilot, I ARO shoot and he shoots 1 at the bike and 2 at the pilot. In the end, bike and Rasail out. Kamael on top of the building heals the Sukeul ML and Kaeltar hugs the corner so I can’t catch his back from this side of the building. He spends a Token and reforms the triad the burns the last order to kill the pilot with the Kaeltar’s LSG. Man did his job and I couldn’t be happier.

He burns two orders in Sukeul HMG, dividing burst between the Securitates at the top of the building and Spector at the side of the plaza and takes out Securitate Feuerbach before dying. Hatail’s triad lets the Makaul toss smoke so she can get in front of the SF Zondnaut and out of sight from the plaza. With a couple more orders and smoke, she reaches the section 1 console safely.

Viral Sakiel moves towards the plaza through eclipse smoke that takes a total of 4 orders because of one bad speculative smoke toss. Last order tries to nail the Grenzer in the middle of the plaza, dice go bad and he gets 2 shots in but I thank BTS 6 and save all armor rolls

Unleash the dog! Zondnautica dismounts before moving towards Hatail and Makaul, Zondmate running towards the Makaul, Spitfire shooting one to him and 3 to Hatail, resulting in a burnt bike and two dead tohaa. An order to move the biker on the other side of the cover, in front of the building where the ML is ducking and another to engage SF, so anyone moving there gets rekt, and then I remember I don’t benefit for cover but I’m closer than 40cm so it’s ok.

Securitates move around the building to th front and MSR shoots the Makaul by the plaza, who smoke dodges successfully a the lowly Kamael behind, who fails his combi shot and fails against the DA ammo leaving a huge mess in the ground. Without support, viral Sakiel sees the Grenzer link advance and tries to fire but gets overshot by the combi Grenzer in the middle.

I spend the last two orders in the Securitate group to try to get a shot on the right flank to th former HMG triad but there’s no angle, still they are forward enough to control section 4. Mary  makes a move onto console 3 and takes control of it. 5 orders to go on group 2 and only resistance on the two side buildings and no one is looking, so I move th Grenzer link into section 2 with three orders, take the console with Spector and throw 2
drop bears towards the side of the building

The opponent knows that the game is lost for him even not being in retreat, so he tries to take points from me. Kaeltar shows around the corner and fires on spitfire pilot, who shoots back and gets 2 shots in and Kaeltar falls unconscious.  Determined, ML pokes his head up to get aros from SF spitfire, MSR Securitate and spitfire Grenzer.

With just one shot and an ancient hate for Grenzers, the opponent who is my brother fires on the Grenzer successfully, blowing him up before getting more holes than a strainer from the other guns. Poor Kamael has nothing to heal now because he can’t reach the Kaeltar in a single order. He concedes victory. He remarks he  killed the bloody Grenzer.

Points: 7-1, he achieved classified objective healing and I had chosen intelcom.

I’m very happy with the Zondnaut performance and I’ll keep using them to master. We both agreed that the impetuous move over Hatail and makaul was the funniest, best move of the entire game, especially because he thought I might cancel the impetuous  order to keep suppressive fire active. I decided my zondmate could make some roadkill instead.

PS: if you want to know, my brother’s hate for grenzers comes from one of our first games, where I played vanilla nomads with ML grenzer as aro piece and absolutely destroyed 80% of his points singlehandedly

Relay AR-309.76 out of danger, attacking force neutralized. We suffered minimal casualties and loss of equipment, but High Command might enjoy the unit’s recorder video. Please keep the toys coming. And please communicate if the aliens think our line is solid, either their comms are off or the Heckler thinks he’s too funny
again…