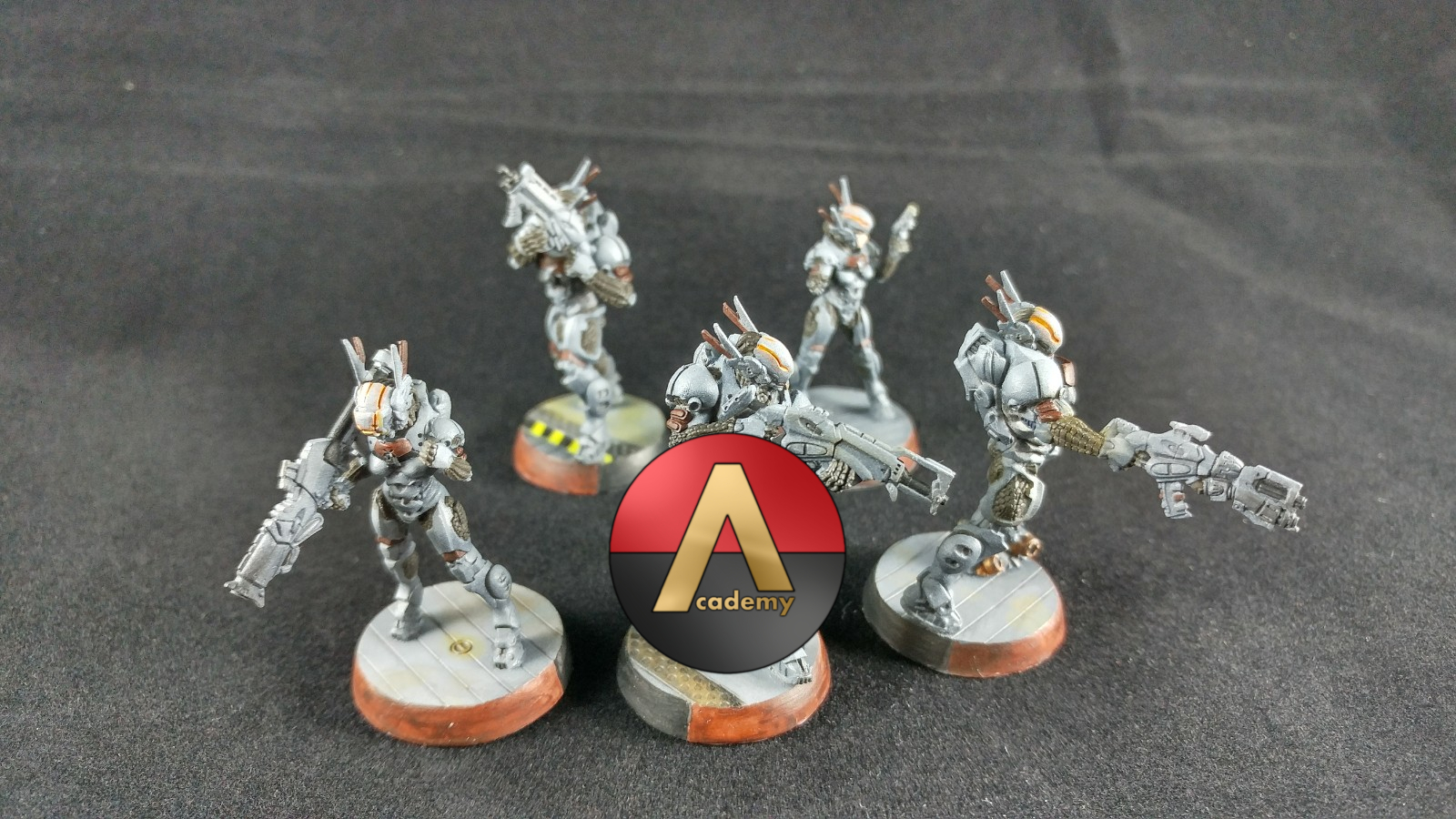 For our mid-mission update, we’ve got Luke Weston writing in with a “treatise of [his] experience of 3 man link teams.” Thanks to Luke for taking the time to write in! Write in yourself to [email protected] for a chance to win a blister of your choice!

Recently I have been using smaller fire teams to help spread my threat and ability to attack from different angles. I found that in our local meta that when using 5 man teams I would very easily lose one to two to an alpha strike or they would be picked off one by one. This was especially true when using the securitate / grenzer 5 man link in tunguska with them only having one wound and low ARM they would be shocked off of the board fairly easily.

I am generally finding that the only 5 man link team I will use is the hollow men / stempler zond link. The missile launcher makes a great ARO in the first turn. Their high ARM, 2 wounds with remote presence usually means I am very unlucky to lose the unit in one attack. Then after the first turn I will usually split 1, 2 or 3 of them off to go get things done. Whether that is killing something with the spitfire in a 3 man / 4 man core, setting the assault hacker up an area denial board control spot, getting a triangulated firing solution to deal with a problematic TO sniper with the zond etc. I have also found that because of the super jump they are easier to deploy on top of large buildings prone as they can get down easier.

This team is a smaller hollow man core. At 108 points for 3 super jumping HI with weapons covering 3 different ranges I am pretty happy. In this team you have the spitfire for B5 medium range murder and including the super jump this can hit many spots people thought safe. You have a multi rifle incase you need shock / AP and to deal with closer range problems. And finally you have an assault hacker with tin bot buffing them against other hackers and helping deal with some issues you just can’t shoot (TAGs im looking at you). Also in ARO B2 chain colts can stop the hurt quickly and the pitcher is fantastic for increasing your repeater network.

The group two team also has a lot of utility but slightly less raw killing power than group one. Here we have Perseus throwing B2 smoke helping guarantee that it goes down in one order, 2 specialists in Spektor and the zond as well as drop bears and multiple different ammo types. (breaker, AP/shock and the zond can be buffed with marksmanship lvl 2).

With 2 units having NWI and visual mods as well as arm 2 they can usually out shoot most midfield / LI units / cheerleaders. In a recent game the zond pulling 2 extra armour out of a panoply made it much more robust.

Group three has a HMG kriza and multi rifle hollow man. Here I was aiming for two overlapping range bands and the pitcher adds repeater utility. Also with the kriza the FA lvl 2 doesn’t stack with the fire team harris bonus so he is as good a gun fighter as he is likely to get.

Here I have Spector, a grenzer spitfire and a killer hacker interventor. Again I have 2 specialists, MSV1 and a spitfire for killing midfield camo easily as well as overlapping range bands and a killler-hacker that just won’t quit. I think the weak link here is the grenzer and his 4-2 mov. You could use a normal HD+ LT interventor in this link but I generally want to hide them.

In Corregidor I have been experimenting with using the three Alguaciles two Brigada link, which in theory brings a balance between the LI Algualicle link and the full five man Brigada pain-train.however I think it brings too much of the weaknesses of the plain Alguacile link. I have probably been deploying badly but losing one or two of the alguaciles before losing any of the brigadas just stings a little. On the flip side the Daktari being wild card is pretty useful for picking the Brigadas back up.

Moving onto the three man teams I have been having much more success / fun having two of them.

Here I have been loving the price and versatility of the Deadpool / jaguar link. I have explored the adhesive launcher / panzerfaust profile as an ARO presence but he generally dies pretty easily and I think I should try him as a more active piece to bully TAGs or scary HI units. The Harris bonus chain rifle is a great deployment zone protector as well as corner control as you push the link up. Going dogged to really hold ground is a great option too. I found some success being able to push the link up with the harris smoke / eclipse smoke option and then spec firing EM grenades on top of an Avatar to take it out of the game.

Group two is a similar option to the tunguska hollow man 3 man link. I have multiple overlapping range bands, a pitcher and direct template weapon, as well as the climbing plus remote for taking out hard to find target. Also marksmanship LVL 2 on the remote helps put the NWI and dogged units down instead of wasting orders shooting a sercond time.

Group three is very similar to the link in group one but cheaper with a specialist that can pick up your poor brigadas if they eat an errant crit whilst killing something.

Finally group four is similar again but with a strong hacker presence. Putting a tin bot lvl 2 in there can really help protect the relatively fragile Gomez with her low BTS.

What was I thinking?!

In conclusion I am seeing a trend in my small team list building. I am usually taking units with just enough overlapping range bands / ammo types to deal with different problems. I am usually putting a specialist in there to push a button or two if required. Also I am taking units with more than a single wound, either 2 wounds or NWI. With the points saved by having a smaller core I am finding I can throw in another harris option in my lists or if my list already has a large points sink I can just squeeze a simple 3 man team in.

For example, I recently tried out this list for a small tournament coming up (a limited insertion day playing show of force, frostbyte and looting & sabotage) where the organiser is pushing for a lot of TAGs and HI units.

This list is written for show of force and looting and sabotage.

With the szalamandra taking up so many points and having several roles I wanted to include a back up plan in case it died, or couldn’t make it to the AC2 to tear it apart. In the list I took the 3 man special harris with Perseus, Spector and the zond. My plan was that on the way to the AC2 Spector could hit the panoply and grab some D charges, to kill it in case Persus died on route. With multiple ammo types and visual mods the team is good but doesn’t excel at removing obstacles on its travels. The rest of the list is fairly aimed at supporting the tag, hitting any classifieds required and stopping enemy tags (jammer, e-mauler / repeater spektre). At 86 points I am looking forward to exploring the special fire team further.

In Corregidor I have another list which I plan to take making use of two three man teams instead of a larger five man team.

This list has no real mission in mind but is a fairly generic all comers list. In group one I have the three brigadas / tsyklon core as well as the Deadpool two jaguar harris. Again in the active turn I have B2 smoke from the jaguars to put smoke down for the intruder if there is something that the brigadas can’t take off of the board. The rest of the list is there to provide orders or support those teams. Except in the case of the bandit (who is infiltrating to push buttons or to kill stuff), the tomcat engineer (who can flank to kill things, or show up anywhere to fix things / push buttons) and the intruder (he is there to do intruder things).

All in all I am a lot more flexible in the building of my link teams now and will rarely take a 5 man core (hollow men don’t count!).

Thank you for reading and making it this far. I hope you can take something useful away from my ramblings