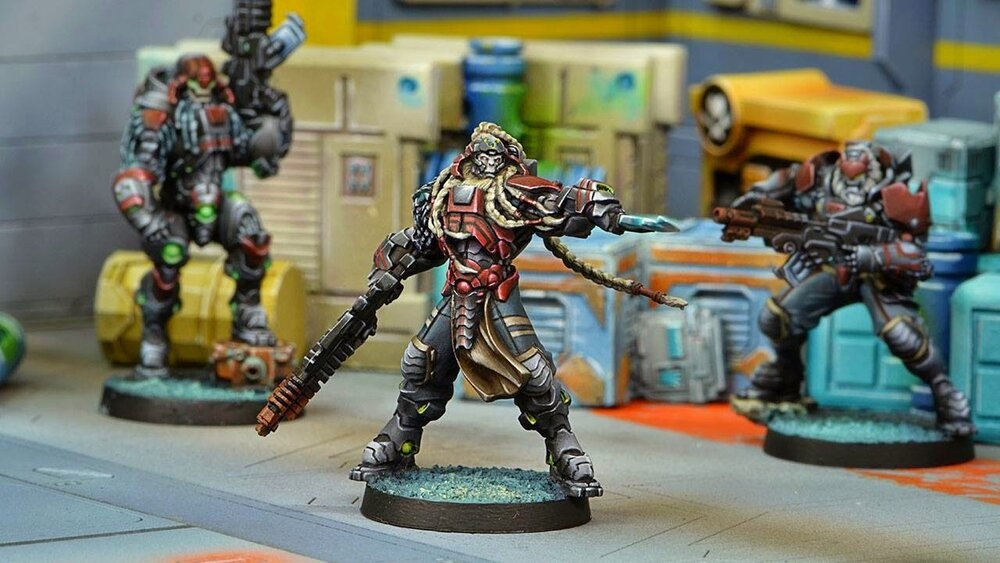 It has recently come to my attention that I totally dropped the ball in my Morat unit reviews, somehow I totally missed our most beloved commander, Kornak Gazarot! He’s the biggest, baddest Morat there is, also an incredibly cunning leader (for a Morat), and a damn good fighter.

Kornak’s profile alone shows him to be an absolute bruiser. In melee he’s devastating with CC22, Berserk, and PH13 with a DA CCW, while at range he’s boasting some serious firepower with a BS14 MK12, and just in case you need it, a light flamethrower to torch things. Kornak is quite resilient on top of all of it with ARM 3, a crazy BTS 9, and No Wound Incapacitation, truly making him an all around damn good fighter, regardless of what he needs to do. Oh yeah, and fighting isn’t even really his main job! As your Lieutenant (which he should be if your’e taking him) Kornak provides a solid (for MAF) WIP 14, but more importantly Strategos L1, letting anyone use his Lieutenant Order as a Regular Order. His combat ability really shows that to be an effective MAF leader, you need to win fights first. It’s also very important to remember that in this ITS season, he has Forward Deployment L1 due to being Medium Infantry (who is as tough as Heavy Infantry).

Kornak can form one of two fire teams with Suryats, either a core or a Haris (which he provides the Haris rule for). Either of these links are going to be extremely expensive, but you can reduce the cost a tad by swapping one Suryat out for a Raktorak. My personal favorite link with Kornak is a Suryat HMG, a Raktorak with Vulkan Shotgun (not the NCO profile), and Kornak (Lieutenant). These 3 models alone effectively produce 5 orders, for 111 points and 2 SWC… not a bargain, but can get a lot done! Since Kornak and the Raktorak are both MI, neither of them are hackable, reducing that threat risk, and both of them start an extra 4” up the table. The link covers all range bands up to 32” very effectively, has a specialist, a B5 HMG, B4 MK12, and B3 shotgun with fire ammo, plus a direct template weapon, and powerful CC monster. Generally, if I’m running Kornak, he’s either going to be on his own, or paired with a single Raktorak, so he can drag a specialist along to accomplish mission objectives for him, though that will take up your Haris, which might be better used elsewhere (like Rodoks).

In just about any other army, I wouldn’t get excited about a Lieutenant who was also a combat beast, nobody likes risking going into Loss of Lieutenant… except maybe Morats. MAF have such incredible mechanics to help in the Loss of Lieutenant state, there’s really not a lot of reason to pass him up (really just his cost). In MAF, being both a solid Lieutenant and a great fighter just adds to the efficiency. Worst case scenario is that he goes down, and the majority of your army is still totally fine.