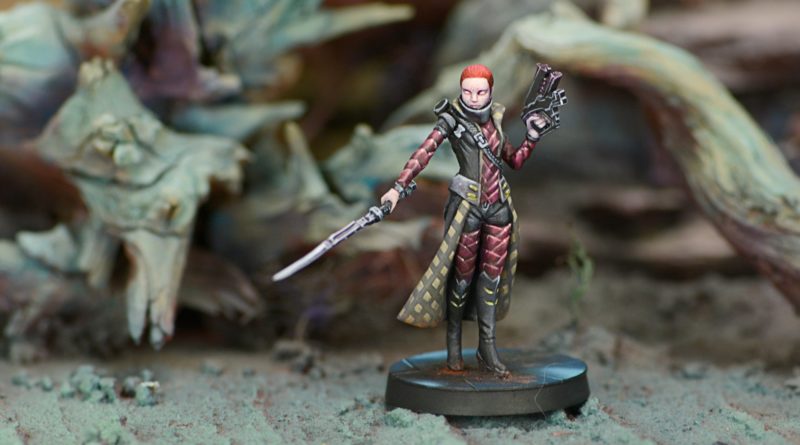 Pretty excited to try this list out. I feel like, and it was mentioned on Late Night Wargames, that Shas are a good candidate for this mission. It’s my first time running a sectorial without a linked team, but I kinda feel a little more free. I have good aro control with the two Q-drones, reach with the Speculos and an even spread of VP in the quadrants. Having full ava of the Seed Soldiers will allow me to plant some surprises around the field.

I had my two Ikadrons on either flank. Seed soldiers deployed in the midfield covering different quadrants. Q-drones and slave dornes up on buildings to provide board control. Dr. Worm and my Nox hacker hiding. Shiskiin right in the middle to run up the board and cause damage. Up on the right my two Speculos next to his deployed fireteam. I’m hoping the Seed soldiers and my Q-Drones will give me enough board control to stave off any advance and I can sop up any hostels that make it through with Sheskiin.

Core fireteam deployed in a building on the left, planning to move up the left using smoke and the heavy hitting Asawiras. Haris team of Muyibs and Lasiqs on the right to provide good aros from a tall building. Muts on the left and the middle to provide support. Daylami and Farzans in the midfield and a Fiday up on the right.

I spent my first order moving Shiskiin out, Haqq player revealed two Daylami with panzerfaust. After a few poor rules and an armor save no wounds were dealt. I spent my next order on the Q-Drone targeting one of the daylami and blasting him off his roof. Sheskiin took care of the other and continued to move forward. I then spent a few orders on the Q-Drone trying to take down part of his sniper nest across the board. After falling unconscious a few times and being brought back by Dr. Worms peripherals I gave up and focused elsewhere. I activated my, definitely not, Speculo Killer and she moved in the base to base with an Asawira (those bad boys are honkin) I was hoping I would get lucky with my Monofilament blade but again the armor save was made and no kills were to be had. Last order was spent moving an Ikadron up and discovered the Fiday.

Sheskiin being a badass until she was bombarded by panzerfausts.

Way too many orders trying to dislodge that sniper nest.

Just a friendly Haqqislam civilian over here nothing to worry about.

I see you mister Fiday man.

Spent his impachues order on the Mut to move him into contact with my Speculo to give the Asawira another dice for the CC. Unfortunately, when the Asawira activated she lost the roll and failed her armor save which in turn broke the link. He then spent some orders on the other Asawira to move him into CC with the Speculo after taking a wound from my Q-Drone across the way. A Farzan revealed and placed a mine in front of Sheskiinb hoping for the best. He spent some ordres on his Haris and took out a Q-drone and started moving up the board to grab some quadrants. I AROed with my last Q-drone and a Seed soldier and was able to drop the Muyib and a Lasiq. The now lone Lasiq pulled back behind cover and took a potshot at my Q-drone and dropped him.

“Oh man I hope this works.”

Surprise ARO with the Seed Soldier

The lone Lasiq running for cover.

Ok, things are going surprisingly well. 3 objective points for me, I control all the zones! I bring up my lone Tiagha to support the Speculo and then bring my Q-Drone back with Dr.Worm. The Q-Drone then takes out the last Lasiq. I spend an order on Sheskiin, she tanks the Farzans mine and proceeds to eat his whole body. Super Sheskiin then walks across the board taking shots where she can to take out most of the remaining Haqq in the building. I realize at this point that I’m close to tabeling the Hassassins and pull Sheskiin back and drop her into suppressive fire. I then spend my final orders on moving my Seed Soldier up and forward observing a Daylami body for my Classified objective.

Not looking good for the Hassassins. The Asawira is activated and loses the roll against my Speculo and then dies to the Monofilament and my Taigha dodges into CC with the Mut. A few orders are spent on the remaining Ghulams trying to take out Sheskiin, but she repels them and kills a few in the process. His last order is spent on the Fiday killing the Ikadron. At this point Hassassins were in retreat with very few models and we decided to call the game

And the last Asawira falls.

And over in this corner you can see the Fiday beating the poor Ikadron to smithereens.

Surprisingly I really enjoyed this list. I feel like it gave my a lot of options while still pack a big punch with Sheskiin. Having the double Q-Drone guarding most of the field with Dr. Worm able to bring them back up when they dropped was really strong. Spreading out the Seed Soldiers really gave me options for AROs and completing classifieds. Granted, a lot of the rules with the Speculo were very lucky but she was able to tie down the whole fireteam. I didn’t even end up using the other Speculo as back up. Overall, I think this list is well rounded although the dice were largely in my favor.