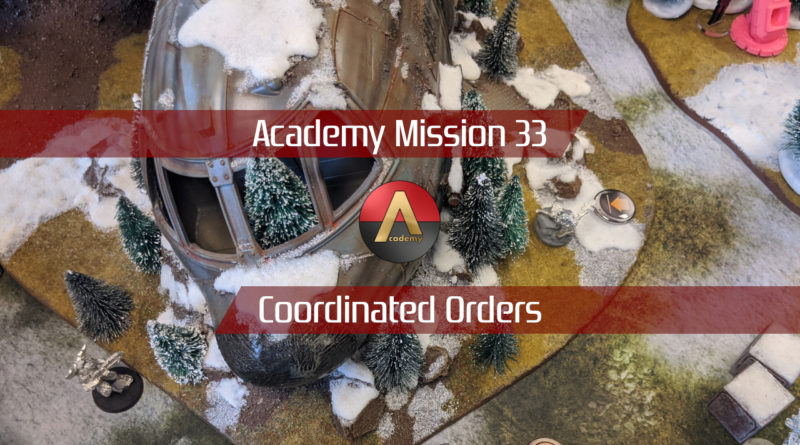 First off, thanks to Erin (IceCream) for the idea for this month’s mission! If anyone has any suggestions for missions they’d like to try, feel free to send in your ideas, preferably with a battle report for this mission! This month is all about that extra resource: command tokens!

I think we all have a habit of docking our opponent 2 orders at the beginning of the game, so for most of us, we’re playing the game with three command tokens. There are a couple of ways of spending them during the game, but the one with the most strategic depth is the Coordinated Order. Coordinated Orders can be used for many things–attacking, movement efficiency, hacking, and just plain forcing your opponent to choose between several bad options!

Here’s a game in which I used Coordinated Orders to reposition both a Clipsos and a Gao Tarsos into better positions. I maneuvered the Clipsos behind a Haris while the Gao Taros pinned a core. Without the movement from the coordinated orders, I would’ve had to spend two more orders moving each model individually instead of shooting. You don’t always have to activate four models, sometimes two is enough in a coordinated order.

Using a coordinated order to attack, especially if you have some high-damage, single-burst weapons like Panzerfausts and Missile Launchers (and the now gone DEP), is also very useful. Haqqislam excels at this tactic due to its access to dirt cheap Daylamis with Panzerfausts! Metros out of FRRM are also dangerous. Sometimes you can force bad decisions out of your opponent if you have hidden information or better yet misleading information!

Here’s a game in which I use a Hafza with HRL disguised as Leila to fool my opponent into misreading some range bands and choose the wrong model to ARO against:

Both of us actually used quite a few Coordinated Orders in that game. It’s a worthwhile read. Other things you could consider are coordinating a hacker that’s currently threatening something hackable with some gunfighters. Assuming the hacker is out of line of fire and your gunfighters are threatening enough to the target, you now force the tough decision of reset, dodge, or shoot back on the target–all of which are bad, because you’re going to be granting something a normal roll!

If you share the Google doc with me, that saves me TONS of time handling the images. If you can, please avoid sending me a MS Word or LibreOffice file, and just click the “share” button in Google Docs. Sending me a file will get you caught by my spam filter!

If you’d prefer a Bromad Academy patch, we can mail that to you instead! You only get one or the other though.

Winners will be selected by wheelofnames.com, because it’s AWESOME…