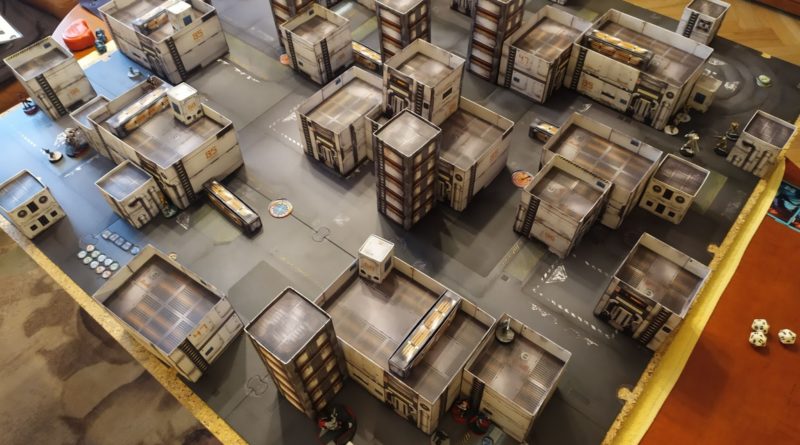 Knowing the mission I’ve decided to take 2 fireteams. First one consists of Riot Grrls with Missile Launcher, Spitfire, Boarding Shotgun, Avicenna and Fiddler to defend one Deployment Zone of mine. And the second consists of 2 Taskmasters (one with Red Fury and one with HMG) and Morlock to support them. To fill it in I took Zoe with Pi-Well as they complete most of the Classified Objectives by themselves. I was leftover with some points so I upgraded Morlock to have a Boarding Shotgun as I didn’t see more viable upgrades in the list.

My friend wanted to play his list that was a bit different in N3 (i.e. Scylla had Assault HD), so he’s missing a few points to complete 300, but we’ve discussed changes he could make for our upcoming games.

I won the Initiative and I chose the Deployment Zone. Steel Phalanx decided to go first. Phalanx deployed their Fireteams in two different Deployment Zones and supported one with Scylla and the other with Achilles and Motorized Bounty Hunter. I think we can call it a support role, but he was there mainly to clear the way for the Thorakites fireteam to keep them safe.

I did pretty much the same thing. Pushed Riot Grrl with Missile Launcher forward on one of the buildings, left Spitfire on a corner below and hid the remaining one with Avicenna and Fiddler. Motorized Bounty Hunter was overlooking their flank to keep the middle of the table safe. In the left Deployment Zone I kept my two Taskmasters, their Morlock and Zoe with Pi-Well.

Steel Phalanx lost 2 Orders due to my Command Token use. Achilles started his run by taking out my Missile Launcher Riot Grrl, cutting through my Spitfire Riot Grrl and running into Fiddler and Avicenna for some Close Combat in which he lost a Wound to Fiddlers D-Charge (I thought she had B1 there, so she used just one).

Meanwhile Thorakites pushed towards the Antenna and failed to activate it and Motorized Bounty Hunter took a position overlooking Phalanx’s Console.

I was left with Achilles near my Riot Grrl fireteam, so I decided to expel Avicenna from the Fireteam to keep her safe and my Fiddler went in alone vs the Achilles with her remaining 2 D-charges. She failed to hit him and lost a wound to Achilles. Then I reformed the Fireteam with all 3 of the remaining members, pulled Riot Grrl into the Close Combat and hit the Achilles with Avicenna’s Burst 4 of Breaker Pistol (+1 B from her CC skill and +2 B from two additional fireteam members in the activation). Achilles took his swing and Avicenna. As a result both of them died.

I was left with basically a Fireteam Duo of Avicenna and Riot Grrl and a Taskmaster Haris with a Morlock. I pushed them to the middle. Taskmaster with HMG went up to the building and later up the ladder to kill some Thorakitai and Motorized Bounty Hunter. At first he took out Paramedic from the ground level, while Forward Observer dodged out. Then from the top of the small building he killed the FO and Bounty Hunter, only to follow it up with a kill on Thrasymedes that was visible from the beginning but I decided not to remind that to my opponent and left him alone until taking care of the other troops.

Then I had to fortify my Lieutenant who was up to meet the Myrmidon fireteam. I put Morlock in front of him and using Lieutenant Order I put Taskmater into Suppressive Fire Mode.

As expected, Myrmidons started pushing their right flank. They put two smoke grenades (one which covered my Morlock) and then ganged up on him.

As they didn’t have reliable means to fight the Taskmaster they hid behind the tower to defend during the next turn.

Here I used my Taskmaster to take out Phoenix and Myrmidon that were visible to him, put him back into Suppressive and used the other models. Bounty Hunter pushed to the right Antenna together with Fiddler and remaining Riot Grrl. Fiddler activated the Antenna and Motorized Bounty Hunter did the In Extremis Recovery Classified Objective on Thorakitai that ‘survived’.

Having not that many orders left Machaon with a Myrmidon threw down smoke, activated left Antenna and ganged up on Taskmaster from an angle that he couldn’t see them, so they were left in Silhouette contact for my turn. Scylla got to have a better view on their Console.

Machaon and Myrmidon being in a Close Combat made things much easier for me. I pushed Pi-Well to activate their Antenna (on a third try…) and Motorized Bounty Hunter to control the Console and have enemy HVT in her ZoC leaving us with…

I haven’t played Bakuning for a long while and when I did back a year or two I didn’t touch the Riot Grrls fireteam that much. Now I really like their high mobility (6-2 MOV) with assistance from Avicenna and Fiddler (both basically being 2W with their NWI and Fiddlers Immunity (Shock). They seem to be very versatile and I am likely to use them in the upcoming local league.

I love the Taskmaster with Morlocks. It’s been a second game with them and they excel at what they are meant to do. Hard to outgun and hard to kill in CC, it’s been long since I’ve felt this protected during the game, though I wish I could take Lieutenant on something else during this game.

For the next game, which was a league game on Panic Room versus Invincible Army, I swapped HMG for another Morlock and took a 2nd group consisting of TR Zond, 2 more Morlocks, Flash Pulse Drone and Warcor which gave me enough maneuvering space in 2nd group to pull the Morlocks in for some Shenanigans and while ML Riot Grrl killed Kokram and Shang Ji Hacker (it was, unfortunately, my opponents first lesson in Missile Launcher vs Active Fireteams 101), Taskmaster with 2 Morlocks managed to get back the Panic Room from w Mowang and two Zuyongs (that together with Shang Ji pulled to the Panic Room, but left the Shang Ji outside. Combination of Smoke Grenades and multiple CC reliable characters let me take the Room without any sweat and then support it with Riot Grrls, while Taskmaster left it (to not die as a Lieutenant) and my opponent had a really hard time fighting back. Even though he correctly attacked the Morlocks while Taskmaster was killing his units in CC. The game was a one sided victory as well with 10-2 for my Bakunin. I feel like toying around a bit more with this setup for the upcoming Supremacy in round two in the League.