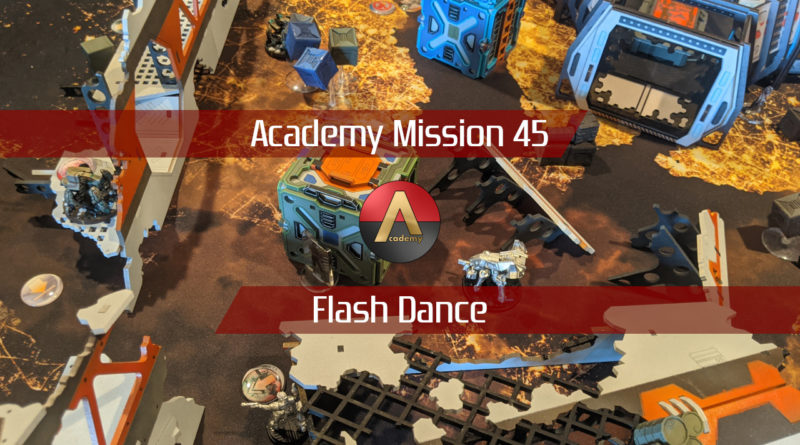 Thanks to all our respondents from Mission 044!

For Mission 045, it came up in one of the Discords (thanks Erin) that new players may not be aware of how powerful and effective a well-placed and well-timed Flash Pulse can be in addressing a threat. It goes beyond just Flash Pulses though, Infinity offers a number of non-lethal one-shot-stop options. To just take a quick look at some of the options:

There are are melee versions of some of these, but we’re looking specifically at the ranged versions (templates count).

You often hear about these weapons being used defensively to stop a rambo attack from a TAG or something, but they can also be leveraged in the active turn to “debuff” an enemy for an easier kill. In either case, the enemy isn’t totally out of the fight, they can reset out of the negative state (albeit at a big penalty) or the state will clear itself, so really you’re just buying yourself some time.

This time can be invaluable if something has stomped its way to your side of the table and is taking your models out, but you can also buy yourself some time by letting your opponent have to spend some time on their turn dealing with the negative state. For example, you could E/Mitter a TAG from a distance, then cover the engineer’s approach to the TAG with an ARO or something similar. They can still problem solve their way out of the situation, but that might be their entire turn, whereas you spent only 1 order E/Mittering the TAG on your way to doing something else. The efficiency/payoff can be pretty high!

There is one massive downside to non-lethal weapons. In most cases (except for Isolation), the model still generates an order so it’s still contributing to the enemy’s resources. They also still count for points in area control missions, so while you may have turned a Ratnik into a statue, it’s still dumping a bunch of points into a quadrant that you now have to contest, or you’ll have to shoot it the old fashioned way. It’s also worth noting that Isolation isn’t Immobilized! That may seem self evident, but when you’re juggling lots of problems you may file that model away in your brain as “not a threat, thanks to Isolation,” only to get shot as you walk by! it’s happened to me several times, so you’re not alone.

In short, non-lethal weapons offer you a tradeoff. They’re generally pretty cheap to field (certainly cheaper than an HMG) and offer a high degree of stopping power in the sense that they force multiple or difficult saves and then proc a pretty impactful negative state that stops a model from taking further hostile action. However, someone still has to deal with that model–either you, by expending bullets shooting at an immobilized model, or your opponent by trying to clear the state.

So if you’re looking at these weapons and asking yourself “why would anyone ever take one of these when HMGs and Snipers exist?,” maybe give them a go! I’m confident you won’t be disappointed.

If you share the Google doc with me, that saves me TONS of time handling the images. If you can, please avoid sending me a MS Word or LibreOffice file, and just click the “share” button in Google Docs. Sending me a file will get you caught by my spam filter!

If you’d prefer a Bromad Academy patch, we can mail that to you instead! You only get one or the other though.

Winners will be selected by wheelofnames.com, because it’s AWESOME…