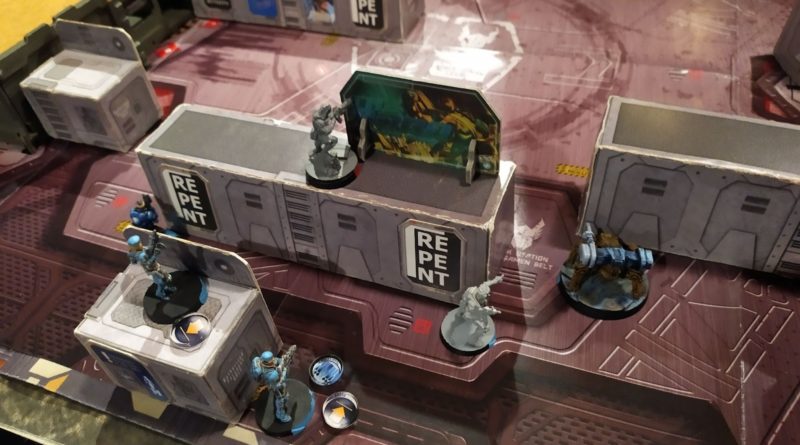 This time it will be shorter. I didn’t expect to put these two games in here today, because I had at least one more in mind to play, but that didn’t work out. Having said that I will chip in based on what I have and my previous experiences.

Setting for this game is a tournament for which I drove to a city on the other side of Poland (and also to meet some friends). I lost the first two rounds and got a bye for the last one. I asked the referee if he wanted to play since the players were pretty self sufficient (13 people played) and we settled on a quick 150p game of Annihilation with what I have brought for the tournament, which was Bakunin.

My opponent deployed first. Zero in the middle near the large building. Pi-Well in DZ to my left, Warcor on the right. Riot Grrl, Zoe and Fiddler on the ground behind the Pi-Well and Moderator with Morlock behind the Warcor.

I decided to Infiltrate my Bran close to the Pi-Well. He succeeded so that was something (even rolling on 16s you can never be sure). Lunokhod in the middle with Koala to protect my DZ from some crazy shenanigans. Chimera on the left since she had more cover there. Fireteam deployed around the large building. Riot Grrl on ARO duty, Paramedics on a roof and right side corner, Lt behind the Riot Grrl and Grenade Launcher on the left covering the left flank approach.

First things first. Bran is a danger to Pi-Well so enemy forces attacked his position hard. In the end I think he was finished by the Jackbot or Pi-Well. Fiddler approached the middle building and hid there with Jackbot and a Riot Grrl.

I decided to take out ARO pieces first. Riot Grrl got rid of the Morlock in the open field, Warcor and a Pi-Well. Then I pushed Chimera towards the Fiddler, and eventually traded in for a wound on her.

Fiddler tried charging the left side, while trading with Riot Grrl, but didn’t notice a firelane from my Moderator wielding the Grenade Launcher. This has ended her run. Zero tried to poke out on Lunokhod from the right flank and put him down swiftly. Threw a mine and went into suppressive fire at the base of stairs leading to my Riot Grrl.

I have opened up with a grenade on Zero to throw him out of Suppressive Fire. Then a Riot Grrl went in and in 2-3 Orders he was Dead. I didn’t have that much left to do so I took up better positions to defend myself.

Riot Grrl had few orders left so she didn’t do anything important here. One of the main things she did was falling back to the corner near the opponent’s DZ.

I’m going for it. I have not much left to lose so I push my fireteam to the middle to chase after the Riot Grrl and Zoe. After all, I didn’t manage to grab either and missed on an opportunity to kill Lieutenant and therefore grab 2 OPs which would probably let me win the game. We both ended up having a middle range for killing/surviving army points and the game ended in a…

Sadly here I don’t have a picture of the whole table, just a few shots a couple of Orders into the Top of 1. I’ll start with the details, so that might help us get a grasp on the whole game.

I’ve deployed a Fusilier fireteam in the back, so that my Karhu would cover all the rooftops in good ranges. Paramedic near the table edge, Lt on top of a different building, prone in total cover, FO on the left and Quinn on the right. Also there’s a FP REM covering the same angle as Quinn.
In the top left corner you can see my defensive turret and near the top edge you can see my Haris. Gunnar, Paramedic and Knight of Justice deployed forward ready to attack.

Remaining FP REM was in my left corner covering the approach to my DZ from the left side as the right had Haris and Core having a good look on it.

Moran (proxied by Intruder) prone on the building. Jazz and Lt on the one in Corregidor’s DZ. Jaguars all around behind the latter, covering different approaches. Vertigo on a long range ARO duty and a Prone Camo Marker to the right (you can see a Prone token behind the blue railing on the right  side building), next to the Cryo capsule.

I push forward with Fugazi to pop the CrazyKoala deployed by Moran and successfully dodge her. Knight of Justice with his Haris approaches the middle part and starts shooting at the Jaguars. Sadly the 2nd one hits him with a Panzerfaust and he gets 2 Wounds in. That’s why I brought a Paramedic, right? Yeah, that didn’t work out too well. KoJ died to the MediKit’s healing, as PH14 was not high enough. I have activated the Cryo capsule next to them (it would be on the back of Gunnar on the pic below) and found an empty capsule.

Jazz puts down a repeater in the middle of the table (around the corner where my KoJ was shooting from). Bandit reveals and pulls out an HVT from his console. Jaguars push forward to secure a location near the 2nd HVT (and maybe we ruled that Master Breachers could activate? Senor Massacre was a Master Breacher, they pulled out another HVT and there was no other specialist in the fireteam as far as I remember), Moran put out another Koala and Transductor pushed my right flank closer with his repeater.

I decided to push the Fusiliers. Karhu as a spearhead and my Lt got left behind, safe in DZ. Karhu pushed around my already activated Tech Coffin only to get blasted by either one of the Jaguar Panzerfausts or a Vertigo. That didn’t go very well. I was left with Quinn and 3 Fusiliers (and the fireteam was reorganized with the Fusilier from Haris). Quinn managed to get rid of Senor and one of the Jaguars.

This turn was spent on Spotlighting and sending rockets. In the end Quinn ended up dead and the Fusiliers scattered.

I wanted to push for my HVT and to feel safer I sent Gunnar for Moran and took him out in 2-3 Orders. Then I noticed that enemy Lt is slightly in view of the Gunnar. A couple more exchanges and I had a clear shot on the Alguacil. Sadly he survived and hid behind the corner and my Gunnar got killed in the next exchange with a Jaguar.

To finish things off Carlota walked in near the right side of my DZ to find the rear arcs of some of my Fusiliers. She killed the Fugazi, 2 Fusiliers and we ended the game with a clean…

I like playing different point formats as much as I dislike Extras. Our game is very interesting for lower point values, adds to the speed of the game and to the feeling of black ops that is supposed to be the theme. Higher point values however allow us to bring the big toys. Multiple TAGs, super costly HI fireteams and larger model counts.

There’s one thing I could say that is not so good about different point values. The game seems to be balanced around that 300 points mark and getting some units in 150p games (especially due to the table size) feels super strong. Back in N3 we had players who would take 2 Peacemakers and deploy 2 Heavy Flamethrowers 1 Order from your deployment zone where you had all your Light Infantry units ready to be burned by super expendable models. There was a Recon+ which tried to limit the heavy units in low point games.
Having said that, my lists usually are very different from regular 300p games and lead to different ideas about missions and distances (especially for these you don’t need that many long range weapons). However I usually keep those different point games to casual only, but getting through this report made me consider doing an escalation league or a league for a different point value.