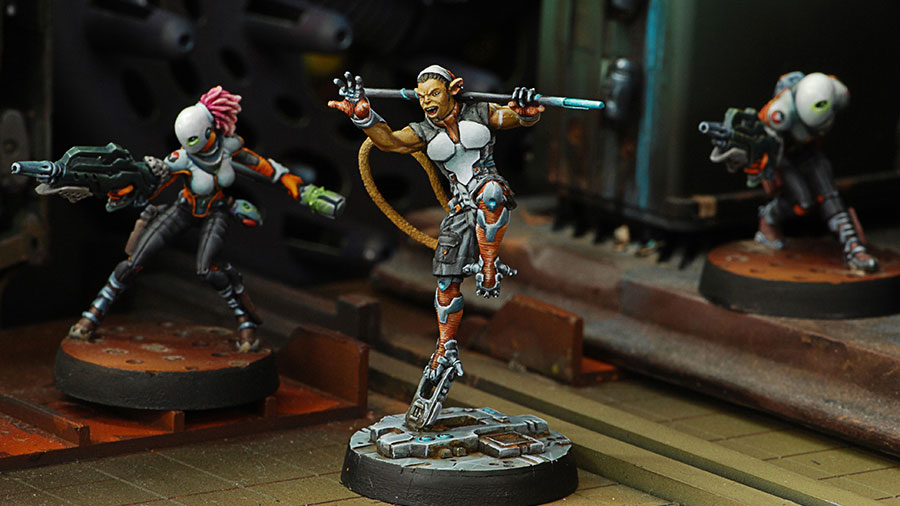 Wanted to write about my experience for Limited Insertion. I’m a new player, having just started in June when the Kurage crisis came out and wanted to try Bakunin and the Riot Grrl Pain Train.

We ran it on this table:

Unfortunately we totally forgot to take pictures during the game to properly document what happened but I had the left side (with the big red ball) while my opponent had the right side of the table. My opponent won the lieutenant roll and chose to go first.

He deployed his Keisostu link on the crates, his Ryuken 9 behind the big yellow statue to cover that flank and the O-Yoroi behind the middle building to cover the opposite flank. The ninjas also covered the half of the table that had the O-Yoroi.

I had my Daktari crouching against the red ball, the lone Moderator nearby on the building and the Riot Grrl link in the middle of the two buildings on the left surrounding the Custodier. Kusanagi was on the opposite flank (behind the building pictured on the bottom left).

As for our reserves; my opponent deployed Saito Togan in TO Camo behind the building with the red ball while I deployed Bran Do defensively in front of Saito (though that proved to be a mistake on my part).

We had Deadly Dance as our mission and during the first turn I wound up needing to occupy the sector that had the big yellow statue while my opponent needed to claim the sector with the cat on top of the square structure with ads.

Saito walks towards my deployment zone. Unfortunately, this is where I goofed up as I deployed Bran Do too close. I should have deployed him within engage distance of the Daktari instead. That mistake costs me as Saito was able to kill the Daktari and then climb up the building to take down the Moderator and earn a Coup de Grace hidden mission objective. My opponent, afraid of the Custodier, then tries to brave the Riot Grrl link to kill her but she manages to dodge his shot and the one Riot Grrl facing Saito’s way manages to stun him with a grenade.

He uses his remaining orders to bring the O-Yoroi and the koalas forward to the sector he needs to control and burning Kusanagi’s ODD off with the flamethrower and trigger NWI.

I started by moving the Grrls. The lead moves closer towards the O-Yoroi without breaking cover to intentionally trigger the koalas while a second Riot Grrl moves up a set of ladders to confront Saito. I use dodge as the second half of my order and succeed against the mine. The ladder is on Saito’s blind side and he fails his roll to turn. The movement unfortunately makes the Riot Grrl moving towards Saito break away from the link.

I stun Saito with another grenade and then move Bran Do in, who crits. He fails the DA CCW roll and is killed outright which is unfortunate because I also had the Coup de Grace hidden objective. With Saito no longer threatening my Custodier, I move her to line up a pitcher shot towards the O-Yoroi. I succeed but then spectacularly fail all my remaining orders in trying to deal with the TAG.

Turn 1 ends with JSA dominating his sector with the TAG, which gives him a huge lead since I didn’t get to dominate my sector and he managed to get his classified objective.

My opponent brings a ninja out and sacrifices her in order to shoot the repeater. The Riot Grrl leader manages to kill her but the repeater also goes down.

The TAG manages to kill Bran Do and the Riot Grrl leader. AROs eventually see it dropping to combi rifle fire, however. Unfortunately with the link broken the Keisotsu link manages to pick off the Riot Grrls one by one and after the end of the turn I’m only left with Riot Grrl, the Custodier, and Kusanagi and decide to concede the game.

I hope you enjoyed this short report.