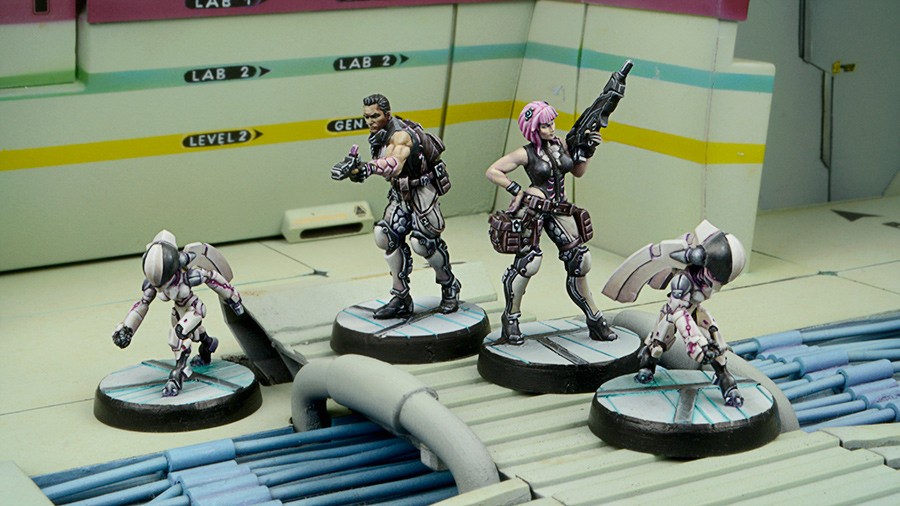 Steel Phalanx, and really all of Aleph for that matter, don’t have the typical support troops you’d expect to find in most other armies. Instead of a cheap combi-rifle-toting mook, sitting in the back and only coming out if absolutely necessary, the Steel Phalanx Dactyls are surprisingly competent fighters, as well as performing specialist duty.

The profile of the Dactyls is pretty standard in Steel Phalanx, they have a decent CC attribute (helpful for D-Charge slapping), respectable BS12, standard WIP13, a point of ARM and 3 BTS. To make sure the job gets done, all Dactyls are Dogged, so if you’re really trying to get Achilles up and have to take some fire in the process, it’s not the end of the world.

Engineer, combi rifle, adhesive-launcher or flammenspeer, D-charges. In addition to the standard combi-rifle and D-charge kit of typical engineers, Dactyls come with their choice of adhesive-launcher or flammenspeer. Up close the dual breaker pistols makes the Dactyl pretty damn good, with a full B3 and breaker ammo, it can really be troubling for some units. For solo-engineers, I prefer the flammenspeer, making them handy to include in coordinated orders, effectively adding a HRL shot to the mix. It’s also interesting as a potential ARO candidate, with Dogged, there is a solid chance you’ll get to fire both flammenspeer shots, and if you can threaten a link, all the better. The adhesive-launcher isn’t bad either, especially if you’re strapped for SWC, and the +1B link bonus makes it significantly more threatening. The only real competition for this guy is the Thorakitai Engineer, which is cheaper, but lacks dogged and the adhesive-launcher/flammenspeer, so unless you’re going to take advantage of being Dogged and the additional weaponry, you may be better off with the Thorakitai.

Doctor, combi rifle, adhesive launcher, nimbus grenades. A fair margin cheaper than Machaon, the Dactyl Doctor (say that 10 times fast) combines the doctor specialist role with a decent fighter, that has some extra utility thanks to the Nimbus grenades. Now nimbus grenades alone are worth an entire article, so I won’t go into them too much, but Steel Phalanx is well suited to take advantage of them (Teucer loves using Marksmanship LX through them). One of the big advantages of having a decent gunfighter as a doctor (or engineer for that matter) is that often times the units you are trying to fix may not always be easy to get to.

Now for the boss of the Dactyls, Acmon is really a slight upgrade to the standard Dactyl Engineer. For 4 more points you get +1 BS and +1 WIP, making him both a more effective engineer, and a more effective gun-fighter. You also upgrade your adhesive-launcher to a lovely panzerfaust, and gain the nimbus grenades of the doctor profile. Overall, you’ve got a lot of utility in a small package, with solid long-range and short-range threats, plus a bunch of utility. Acmon being the Enomotarchos leader means you’ll always have him if you plan on linking Dactyls (without Hector). If taking a single engineer, I’d probably try and upgrade to Acmon, and only downgrade if I really need the points elsewhere.

There’s nothing really special about Yudbots, but they are really damn handy! One thing of note though is that you can get 4 of them in Steel Phalanx, so you could theoretically have a doctor in 5 places at once, or split them between doctors and engineers to get all kinds of coverage. You could also put all of them on Machaon, which would be hilarious if you managed to get them into combat with his target with all those bonus attacks.

On a whole, the Dactyl is a bit of an upgrade compared to the Doctors and Engineers which are common across other factions, but that obviously comes at a cost. If you’re just sitting back and hiding, you’re not really taking advantage of the extra stats and Dogged that you pay for. Thinking of their utility, having a doctor or engineer, capable of gun fighting, helps your order efficiency. Instead of moving and cautious moving around the table, the Dactyl can shoot while they advance to the objective or whatever they need to fix. Dactyls bring a lot of potential problem solving and utility to the table, which I really like, but it can take some practice to really get the most out of them.

As far as fire teams go, I haven’t personally made much use of the Dactyls Enomotarchos, it feels a little weird and expensive for what you get. Dactyls do kind of occupy a middle space, their Engineer is no better at engineering than a Thorakitai, but a few points more expensive, while their doctor is a far less effective fighter than Machaon, but quite a bit cheaper. This doesn’t make them bad, but you do need to consider what you’re getting for the cost, and ask yourself if you’re going to take full advantage of their capabilities.