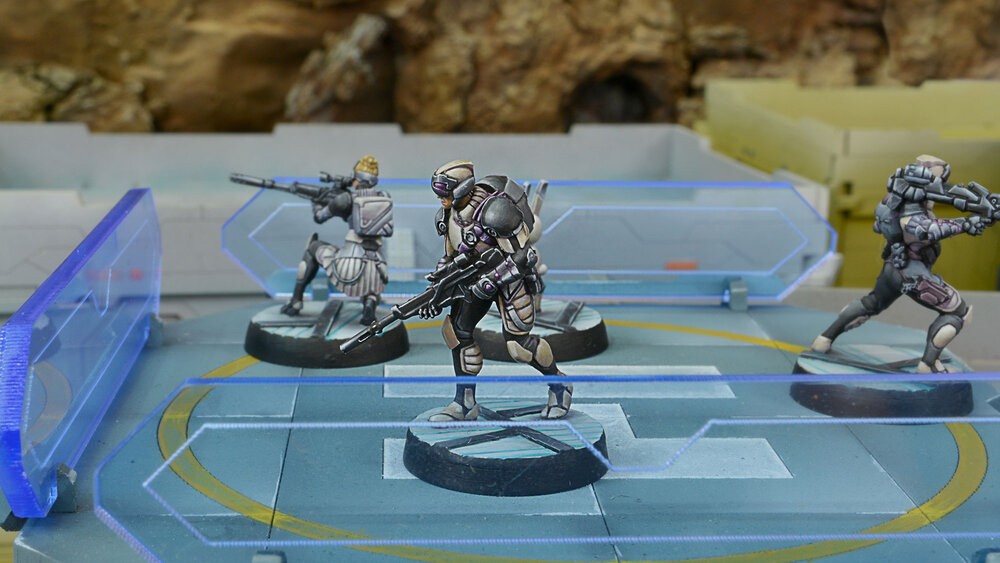 The fire support to the Steel Phalanx, Agema Marksmen are able to provide some effective fire support, while maintaining a reasonable price point. Combining powerful weaponry, with solid BS, and the quintessential MSV2, they don’t leave much to be desired from a dedicated sniper.

One of the things that makes Agema fantastic is their lack of bloat. Their profile is tailor made for a veteran sniper, sporting an impressive BS13. Being Medium Infantry allows them to make use of Forward Deployment L1 to get into a better position, while ARM2 and BTS3 provide some measure of protection. At first WIP14 might seem like a waste, but when combined with MSV2, it makes them very capable of discovering enemy camo tokens, before putting a few shots into them. With the amount of smoke available to the Steel Phalanx, you can easily get a ton of mileage out of that visor.

MULTI Sniper Rifle. First up we have probably one of the most maligned guns in the game. This long-range low-burst weapon may seem like an ARO piece to many armies, but in practice, B2 is often enough to get the job done. Firing at long-range through smoke can often force people to pick Dodge as their best bet of survival, even against links, which lets that B2 work quite effectively. If you score even a single hit, the Double Action ammo makes it very likely that they’ll go down. It’s also worth remembering that they have Stun ammo as well, which can be very good at disabling a tough target, before delivering the killing blow. If anything, the only downside to this profile is that it’s in direct competition with Atalanta, who for a few points more, is a much better shot.

Mk12 and X-Visor. Probably my favorite profile of the three, the Mk12 combined with the x-visor, creates a very unique hunter. Since you’ll likely have your midfield saturated in smoke from Myrmidons, getting a Mk12 up close and personal is a lot of fun, even at longer ranges though, the x-visor lets you remain fairly effective out to 32” with no range penalty. I love this choice for hunting down camo markers, discovering with only range/cover penalties against WIP14, then putting a solid amount of burst into whatever was hiding.

Missile Launcher. Quite possibly the only MSV2 missile launcher in the game, and that should say something. Forcing the enemy to shoot back at -6, or dodge at -3 (dodging a template from out of LOF) is devastating when backed up by an explosive round is really devastating. Of the profiles available, this is my favorite to leave out on ARO duty when facing down a bunch of warbands, smoke will provide them no protection and they’ll be left dodging against your shots which will land on 16’s in your good range.

Quite possibly the most accurate gun in the game, Atalanta’s BS14 gets augmented with her TinBotE to an unheard of BS17, which means you’re hitting on 20’s in your good range when out of cover, and ignoring all visibility mods. Much like the regular MULTI sniper Agema, she’s actually most effective in the active turn for that extra burst, but depending on your opponents ability to handle her, she could be nasty on ARO as well. In my experience, if she’s left out to ARO though, she absolutely is going to get killed, and is a ton of points for a unit which lacks any extra survivability.

As your other ranged option, Teucer is yet another incredible fire support option. While he does have the option of the K1 sniper and feuerbach, let’s be honest… unless you’re facing down Jotum on a regular basis, you’re only taking the feuerbach. Teucer elevates the standard Agema with an extra point of BS, Marksmanship LX, Free Agent, Multiterrain, and Climbing Plus, not to mention being much more survivable thanks to No Wound Incapacitation. That’s quite the skill package, but you definitely pay for it. Of all those skills, I think Marksmanship LX is probably the most notable, which when combined with the Nimbus grenades from Dactyls or Acmon, lets Teucer reliably take out the dreaded linked Kamau Sniper (66.83% chance to knock out the Kamau, while only a 17.12% chance to be wounded in return)..

It’s easy to assume the Agema is like any other MSV2 unit, sitting back and firing though smoke, and they will do that if that’s what you want, but thanks to some more interesting weapon options, and their named characters, they can do a lot more. Steel Phalanx has no shortage of smoke, and if you’re facing a lot of non-linked ARO threats, a couple sniper, Mk12, or a freaking missile, to the dome will take most of them out without much discussion. Teucer though is an entirely different beast, and can really be devastating for an unprepared opponent. I’m not the kind of player who rolls up with MSV2 in every game, but for my Steel Phalanx, I’m happy to have the Agema when the job needs to get done.