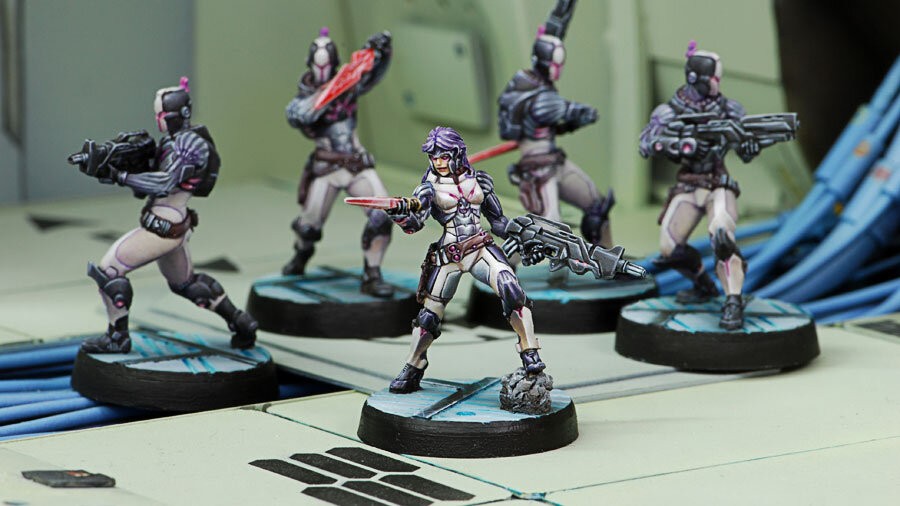 The glue that holds the Steel Phalanx together, Myrmidon Officers are an essential part of many armies. If you thought a Myrmidon was nasty, these take it to a whole other level. In addition to the standard Officer, there are a host of named characters which fill the same, or similar roles, which we will also go over.

Similar to any other Myrmidon, the Officer boasts an impressive profile, with incredible CC, PH, and Martial Arts, able to comfortably rip apart most enemies in melee. Furthermore, they still have the solid BS12 and ODD making them very respectable gunfighters. To take the Myrmidon Officer one step further, they add on V: No Wound Incapacitation, letting them shrug off a non-shock hit while getting their job done. Perhaps the most important skill that they (and all of these characters) have is Fireteam: Enomotarchos, which allows you to create 4-man Myrmidon links.

Chain of Command or Lieutenant. Really, the first thing you need to decide with a Myrmidon officer is simple, will they lead your army, or will they support your Lieutenant. As a Lieutenant, they come at a 0.5 SWC tax, which is fairly standard in Steel Phalanx. If they are linked, they will not get much use out of their Lieutenant order, but for their cost, they’re one of the most survivable, inexpensive options to lead a Steel Phalanx force, and can get a surprising amount of work done on the table.

Boarding shotgun, nanopulser, eclipse smoke grenades. Of the two options available, this one is probably the most unique in the Steel Phalanx army, as it carries incredibly helpful Eclipse smoke grenades. Multi-spectral visor L2 is perhaps one of the best tools to counter Steel Phalanx, so having access to Eclipse smoke can be a real lifesaver. Getting up close and personal with that shotgun, as well as nanopulser, means your opponent will likely be taking a BTS hit, regardless of their ARO.

Combi rifle, nanopulser, smoke grenades. This profile is often overlooked in favor of the previous, in my experience, but it does have something going for it. In my article about Myrmidons, I talk about how much I’m enjoying combi armed variety, well this profile adds the BS12 ODD Combi to the link, on a model you’ll probably be taking anyhow. You do lose Eclipse, but it really is only situationally more effective than Smoke, so often times is not that big of a deal anyhow.

The biggest, meanest Myrmidon Officer there is, Ajax is one of two things in the game capable of delivering an automatic EXP hit in melee, and at a devastating PH16! Ajax lacks a lot of the survivability tools of a regular Myrmidon, like Smoke and ODD, but he is incredibly resilient at ARM5, BTS6, W2, and NWI just in case… In a link, Ajax dishes out a punishing 5 shots with his Combi, which can even be effective at 32” still hitting on 10’s with incredible burst. Despite his incredible resilience, deadly melee, and respectable range capabilities, he comes in at a mere 39 points thanks to his Impetuous discount. Normally taken as a leader for Myrmidons, I’ve been considering running him solo, hoping that high burst and good armor can make up for losing cover with Impetuous. If anything, he could be a great distraction for a low price.

This guy gets made fun of a lot, thanks to the old sculpt, lack of neck, and jar-head coiffure, but he’s one of my favorite options as a Lieutenant, or even solo murder machine. Despite losing a point of CC compared to a regular officer, going up to Martial Arts L4 and a DA CCW means he’s even more deadly in melee. At range he carries the MK12, a favorite weapon of mine thanks to it’s incredible range and low cost, plus a mighty BS13. Eudoros comes with the eclipse smoke of the shotgun-armed Officer, and an extra bit of ARM and BTS. If all of this wasn’t reason enough, the Number 2 skill adds a bit of resilience to your link, in case it goes down while another member is leading the link. Like Ajax, I’d even consider running him solo, as he can effectively gun-fight with devastating effect at long range (provided the enemy doesn’t have a MSV2), but just remember, like Ajax, he starts off in the Impetuous state (which you can get around by having a single other Myrmidon tag along for the fun of it).

Probably one of the most common Lieutenant choices in Steel Phalanx, there’s damn good reason for it. His combat potential is pretty much the same as any other officer (though with -1 CC), he does carry that important DA CCW. At range, he combines my favorite part of either Myrmidon Officer kit, with both the combi rifle and eclipse grenades. Most importantly though, he’s a WIP 15 Doctor (and probably Lieutenant), which is incredible for bringing back your greek warriors from near-death. Even though his profile is somewhat middling among his peers, he still has the ODD, which can be brutal, I’ve had plenty of luck running him alone, out of cover, to engage an enemy at long range while I make for an objective. Between the ODD, eclipse smoke, NWI, and being a specialist, there’s just so much he can do on his own.

A bit of an outlier, instead of being a brutal close combat powerhouse, Phoenix bring something a bit absurd to the table… a heavy rocket launcher backed up by an ODD! When linked he spits out 3 punishing pie plates of fiery death, with a very good BS13, and if that’s not bad enough, he’s very likely at a -12 to be shot back. It doesn’t take much explaining to get the idea that Phoenix is a real jerk to go against, and is one of the more bemoaned characters to put down during deployment. Still a brute in melee, and further protected by the ubiquitous NWI, it’s no wonder that he’s one of the favorite characters by Steel Phalanx generals. Something which is easily overlooked is that Phoenix lacks any form of Impetuous, meaning you can take him solo and savage the enemy from afar, without worrying about giving up cover.

The first thing that all of these characters have in common is No Wound Incapacitation, meaning Shock and Viral weapons are particularly concerning (unless you’re Ajax), but they all also have some form of smoke and ODD (again, unless you’re Ajax). Running any of them as solo-pieces is totally a viable option, though you can also tag along a single Myrmidon to prevent Impetuous from factoring in.

Something I’ve strived to do in my games lately is to be sure I use NWI whenever it’s a good chance. This means I may move-move instead of throwing smoke, if that second move guarantees me to be out of LOF and get to the objective an order sooner. It’s also handy to eat a chain rifle or other B1 ARO (except against fire) to automatically hit back with my nanopulser. There are lots of situations where the taking it on the chin leads to more order efficiency to achieve victory… and that said, there’s no guarantee that they’ll hit with your ODD, and you still may pass the ARM roll.

As far as leading Enomotarchos fireteams, there are a lot of things to consider. Sixth Sense is a damn good skill, but is it worth the cost to get a 4-man link? Sometimes for sure, but other times you’re putting a lot of eggs in one basket. A 3-man link gets just about all the bonus you can in the active turn, is quite a bit cheaper, though obviously less resilient. Personally, I lean towards 3-man links, which feel like you get the most bang for your buck, but I’d even consider 2-man for Eudoros and Ajax, just to keep their tempers in check. It’s fun to bring a Death Star to the table, but having so many points wrapped up in one place can be a huge problem if your opponent knows how to take advantage of it.