The Steel Phalanx NCOs are a pair of unique named characters. Neither is based off of a profile you might be more familiar with, like Myrmidons or Thorakites, instead, they’re uniquely specialized fighters. Each NCO is backed up by one or two Devabots, which not only bring flamethrowers to the party, but additional special rules which complement their controller. 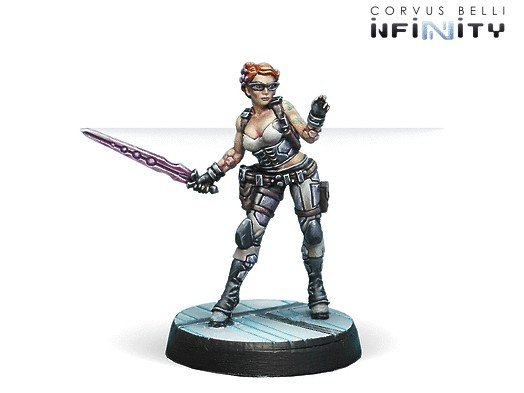 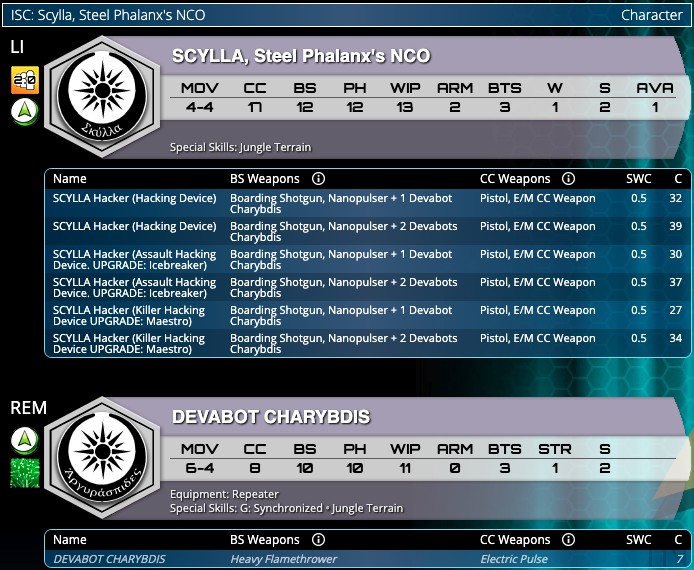 First up, I’ll talk about the NCO which most Steel Phalanx players love, and most of their opponents loathe. Scylla’s profile is fairly standard in Aleph, a bit of armor and BTS and fairly average Aleph stats otherwise. She is always armed with a boarding shotgun, nanopulser, and E/M CCW (but not great CC stats to use it), plus one or two Devabots. Most importantly though, Scylla is a Hacker, with a wide range of options.

Perhaps the least-used hacking device for her is the standard one, not only is it the most expensive, but it also doesn’t pair as well with her offensive Devabot Charybdis that wants to get close and torch things. Since she brings her own Repeaters to the table, the Assault Hacker (UPGRADE: Icebreaker) is not a terrible option, able to cover a wide radius thanks to the Devabots, and being G:Sync’d means they can force bad AROs (do you dodge the flamethrower, or reset against the hack), one of my favorite things to do with AHD with direct template weapons, except you don’t have to risky Scylla’s life to do it. Icebreaker is an amazing upgrade program to IMM-1 a high BTS target before hitting them with something more powerful (like an Agema missile).

The profile that most players use though is the Killer Hacking Device (UPGRADE: Maestro), not only is it the cheapest option by a few points, it lets you do something really awful with the Charybdis… Cybermask. An often-forgotten rule is that Supportware which affects the controller of G:Sync’d remotes, also affects those remotes (i.e. a Peacemaker’s Auxbot also gets B2 in ARO with Enhanced Reaction on the Peacemaker), so when Scylla uses Cybermask, her Charybdis also enter the IMP-2 state. Absolutely amazing, now you’ve got potentially a pair of heavy flamethrowers, disguised in marker states, which are also repeaters for a Killer Hacker that has Maestro. Let’s not forget that Maestro… Simply put, it’s the most powerful KHD program in the game, not only giving you +3, but also puts your opponent at -3, causing DAM14 hits with Breaker, and instead of suffering wounds, puts the target straight to unconscious, making it devastating to multi-wound hackers (like the Charontid). 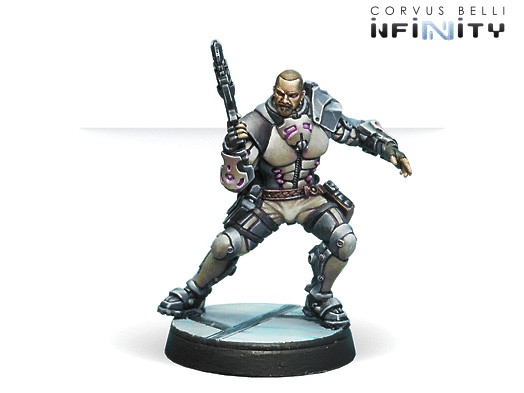 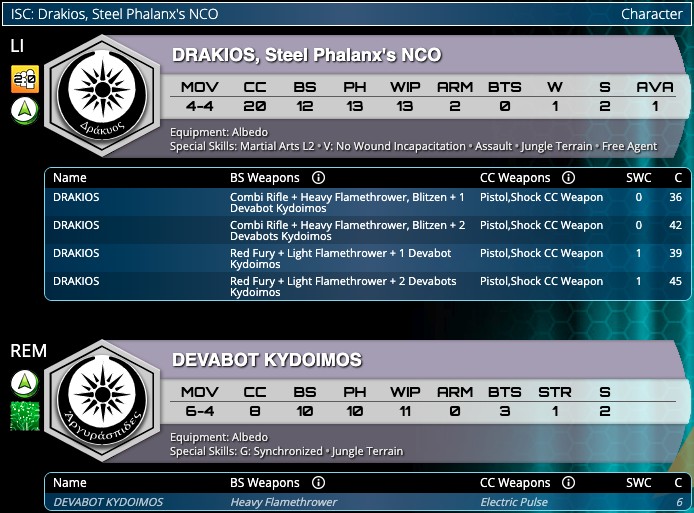 While Scylla is somewhat more subtle in her tactics, Drakios is the complete opposite. He’s very much an active turn killer, with solid stats (though less BTS than Scylla), added survivability from V:NWI, and close combat skill from CC20, Assault and Martial Arts L2. To help you close the gap he’s armed with either a combi rifle + heavy flamethrower and blitzen, or a red fury + light flamethrower, plus his Kydoimos which are also sporting heavy flamethrowers. What makes Drakios really interesting though is his Albedo skill, which the Devabots also have. If your table is being shut down by a Kamau sniper, then he can walk right up to the Kamau’s face and punch it in, or torch him, your call. Since this applies to both of his bots, he can really cause immense problems for MSV units which are left out to ARO.

Drakios is somewhat expensive, though you can really do some nasty tricks in the right situation. A good example is that you can move into melee with him and a Devabot, then if your opponent CC’s or shoots you, you can auto-hit him with two flame weapons, or get a high burst CC attack from the Devabot(s). Since neither he nor his Devabots can be seen turn 1 by MSV troops, it’s a great time to fire off his blitzen, where the enemy will be at -6 to shoot back, or the flamethrowers which will force them to dodge at -3 (template from out of LOF).

One final thing to keep in mind with Drakios, Albedo works pretty much just like smoke, but against MSV2 troops. This means if you fire at a linked unit (like the Kamau sniper), they’ll fire back without penalty if they have 4 or more models in the unit, or otherwise have Sixth Sense L2. So, if you are pinned by that Kamau, moving into close combat is a much better option. 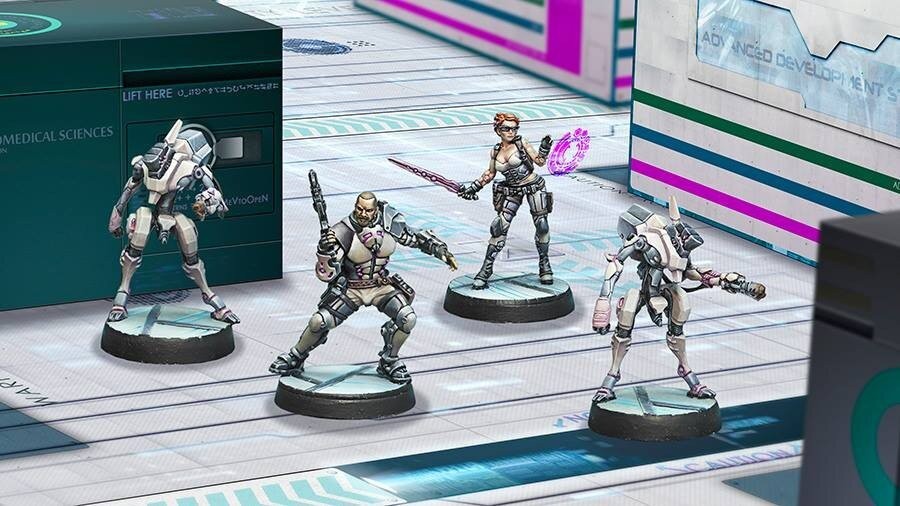