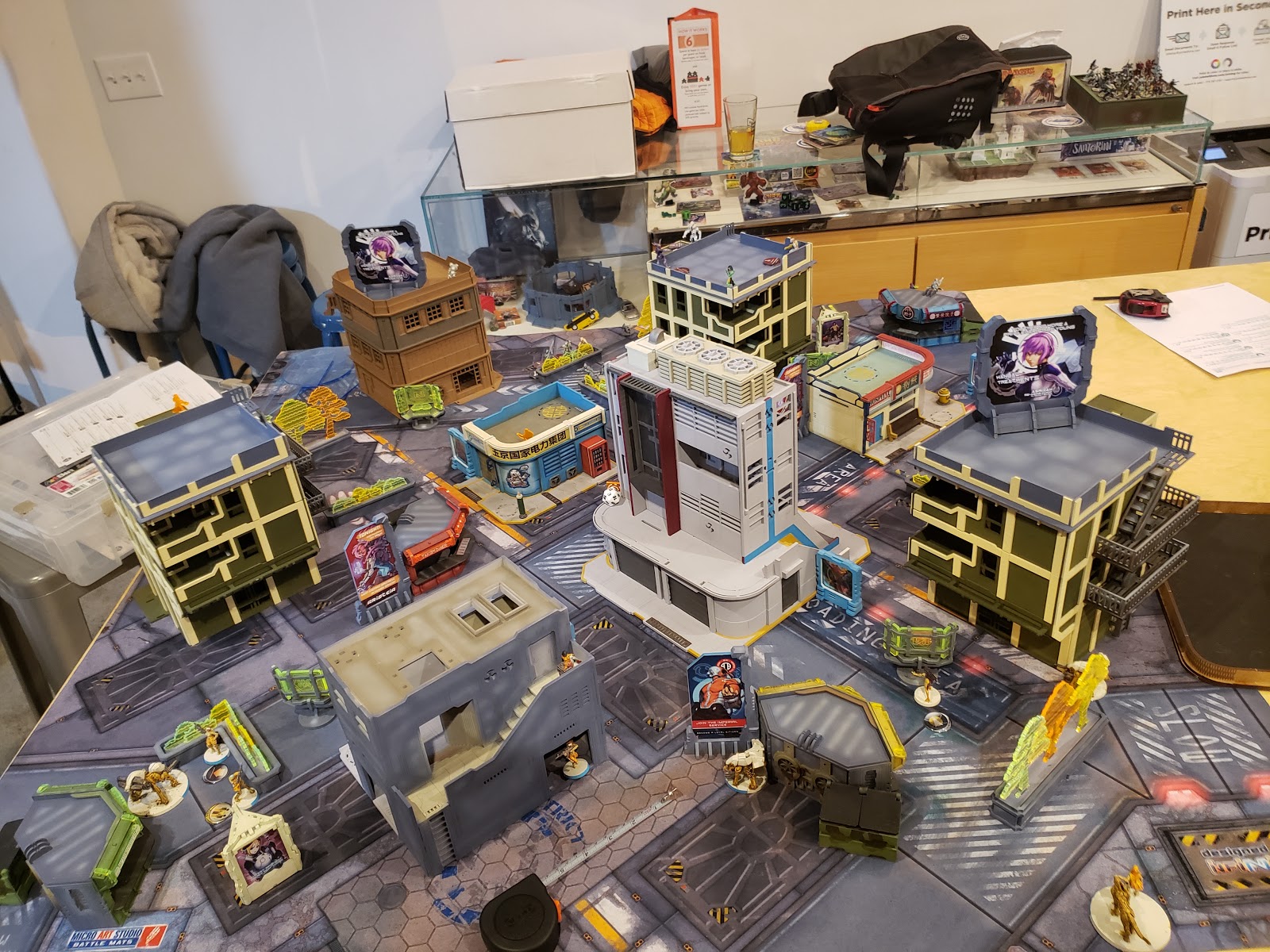 This was a bit of an unfamiliar mission for me, against an unfamiliar opponent and army, and my opponent won the initial roll, choosing the better side and to deploy second, so I chose to go first.  I tried to keep things simple. The Rudras, Yadu, and Trisha (prone) deployed behind cover by the left transmitter. The warcor, and CSU in the building in my lines, as to cover against AD troopers. I put the Samekh missile bot in a central location, while the Asura and the Daleth hung out by the right-hand transmitter. Dart was behind a box near the central transmitter (roughly below the die in the middle) However, Andromeda failed her roll to infiltrate, and so got stuck on my back lines.  I was planning to use two solid bulwarks to hold my home transmitters, while dart and andromeda had been planning to skirmish for the middle. Because they were repeaters, The Asura was going to use the transmitters to spotlight enemy forces that tried to hold the ones on the enemy side of the table for the smart missiles to take out. Dart was my data tracker, as the closest to the enemy HVT.

My opponent had brought a much better overwatch than I did. The top left build had a sniper triad and a rocket launcher hiding prone in the back. On the right building he had a neurocinetics HMG. Two triads were prone in the middle, and one trooper was hiding behind the transmitter on the right. Two TO camo tokens were placed near the middle, one on the center building, one prone at the top right. He used his second deployment to place suffocating overwatch over my main planned lines of advance.

The deployment pictures above were actually taken after my first turn. Dart moved forward to control the central transmitter, but took a sniper hit, entering NWI as she dodged into cover. She placed a mine in front of her to try and make it hurt to come after her. My Asura flubbed a few rolls before finally spotlighting the chaksa behind the enemy’s right-hand transmitter, and then the Samekh took it out with its second shot. I then finished my turn by scoring a hack the enemy classified on that body.

Bottom of the turn, he moves the two triads forward, rooting out Dart by tanking the mine with a symbiomate, taking the center transmitter and dropping a Nullifier to cover them from Spotlight.  The sniper beats up my harris, killing the Yadu and damaging the Rudras. One of the TO camo markers runs forward, revealing itself to be a forward observer, who applies targeted to my Asura. Fortunately he only has a couple orders left in the larger pool, and the Asura only loses one wound to the smart Rockets.

I had more transmission areas, and was ahead 4-0

Near the end of the last turn, we got clarification that the repeater in the transmitter stations has a normal repeater zone, and isn’t restricted to the transmitter zone of control. I took advantage of this, and through spotlight and smart missiles took out a member of the sniper’s triad, the neurocinetics HMG, and the designated target. The TO forward observer was also shot off the board. As everything else was out of hacking range or under a Nullifier, I attempted some shots with the Rudras at the sniper, to no effect.

The  enemy player consolidated his models into one pool. One triad split up and moved to take control of his transmitters, dropping a Nullifier to protect themselves. The smart rocket launcher model popped up and blasted my Rudras, knocking it unconscious. With nothing now having a view down that side of the board, the camo marker in the middle rolled over the side of the building, took out my HVT nearby, scored his Classified on the HVT’s body, and came running down the side towards my left hand objective. However, as the Calipso rounded the corner to shoot Trisha, she blasted him unconscious with her Nanopulsar, and managed to take his shots on her armor.

End of turn, he had more transmitters, so the score was 4-4

Unfortunately, I was pretty much out of tricks. The engineer repaired the Rudras, then I spent my command tokens and some regular orders to move Andromeda up while coordinating shots at the sniper, finally knocking her unconscious with a crit from Andromeda with the last coordinated shot. That move also got her just with the zoc of the central transmitter, but with no further orders available.

Realizing that he had more points already in the zoc of the center transmitter and so controlled it, he refused my bait and idled his units and won 6-4.

The first issue we both had was that we didn’t understand the rules completely, and so neither of us realized the true extent of the repeater net until near the end of his first turn. If we had started knowing it, he would have deployed differently. That either would have given me more freedom of movement, or I might have been able to target more valuable enemies during the first turn.

I think my initial plan, focusing on hacking spotlight through the repeater net and smart missiles, was a good one, as shown by the fact that I used it for most of my kills, and took an early lead. The repeater network was perfect for that mode of attack. Unfortunately, one he literally nullified that mode of attack with his Nullifiers, I was left outranged and forced to attempt a counter attack under fire.