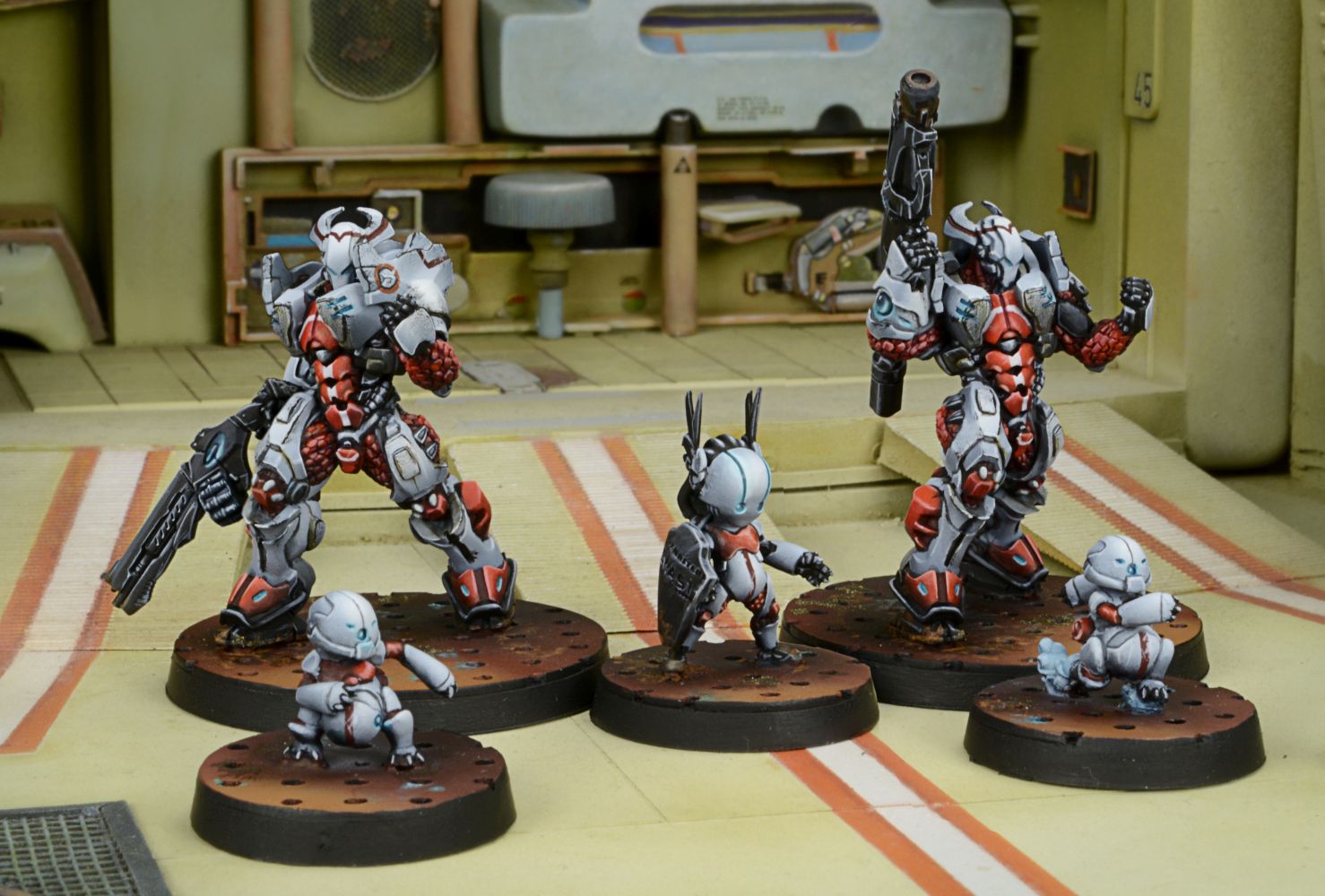 While I wanted to finally run 2x Taskmaster Duo, my buddy wanted to run some models he thinks are fun and we decided to go with the mission form upcoming Limited Insertion tournament, hence 10 order lists..

I’ve set up so that RF + BS duo can attack in my active turn, HRL is an ARO piece and Moderator Core is on a defensive side, MSR keeps enemy ARO in check.

So my opponent is still learning the game and set up with basic beginners mistake of putting a link team close to each other, but eventually I couldn’t crack it too easily and it blocked my Taskmaster assault.

I put my Bran next to the red container.
My opponents’ Atalanta came down on the middle.

I begin with Moderator taking down Atalanta, changing position and shooting down Thrasymedes.

Bran decides to go behind Thrasymedes’s position to reach his Thorakitai. Takes one out with CC Attack and Surprise Attack. Then I rush to the next one and decide to shoot both of the Thorakitai left leaving them both Unconscious. Since Phoenix was still threatening my Taskmaster duo positions I decided to try and take him out, but once I realised there were 3 models shooting me I decided to Dodge instead. Luckily this time I didn’t forget to poke out and back to cover. I Dodge 2x Nanopulser, 2x Combi and a Flamethrower. Bran kills Kiranbot from safe distance and lacking Orders I leave Bran at the next corner.

5 models down, my opponent is relentless. Phoenix ignores my Bran and decides to go for my AC2. Before moving he shoots the CrazyKoala that was left out in the open during deployment destroying it, a one next to it and killing a Red Fury Taskmaster that failed his Dodge at PH-3. A couple more moves and Enomotarchos is in the middle of the field with my AC2 in sight. In last two orders Phoenix, Machaon and Myrmidon fall back to get some cover while Ajax gets a swing at my AC2. Previously taking one Wound from the MSR Moderator he gets knocked out with following shot, he hits the AC2 and I roll 3 successful saves (11, 17, 17).

Time to follow up what I have done in round 1. I reform Duo with another Red Fury and BS Taskmaster that was left from duo1. They go through the right flank so that they set up some CrazyKoalas to cover approaches to my AC2 and RF Taskmaster takes out Machaon and Myrmidon with AHD. Bran quickly takes his swings at enemy AC2 and after 3-4 Orders it’s put down.

Things aren’t looking pretty. Steel Phalanx didn’t fall into retreat due to miscalculated points (my buddy didn’t know that Kiranbots count for 7 points and I wasn’t sure about the pricing of his models). Anyway he has 2 Regular Orders and 1 Lt Order to try throwing a smoke with Phoenix, but he fails the first one. Second goes off. In third Order he get to my AC2 and puts in two hits on my console (crit and a failed ARM roll).

Time to clean the board. RF Taskmaster takes out a Motorcycle from a Panoply, while BS Taskmaster splits towards my AC2. Bran jumps straight up to take a glimpse at Scylla and takes her out. Next he moves into ZoC of enemy HVT. BS Taskmaster pops out of cover onto Phoenix but they miss each other. Next order, he get blown away by Phoenix (this guy is crazy). I decide to use my RF Taskmaster to take him out. Driving back, I get off the bike at nearest choke point and take 2 more Orders to reach a firing position and shoot Phoenix in the back effectively taking him down.

Nomads take the game with 8-2 score.

Bran’s opening was super strong but wasn’t really game winning. AC2 rush made by SP seemed reckless at first but he almost got my AC2 down. I would have probably won anyway because of the Order advantage, but the main objective was too close for comfort. I only realized I had 8 koalas during deployment. Taskmaster duo seems much more appealing after that game, even though they didn’t do that much (despite dying to Phoenix). Moving two of them at the same time was useful at the end when one of them got to Panoply while the other went back to defend AC2.

To get some learning experience from that game we’ve decided to do a thing from December (I think it was December?) mission of replaying Deploy and Round 1.Needless to say it was way more even after Round 1 that during the actual game. Always happy to see new players getting better at the game.