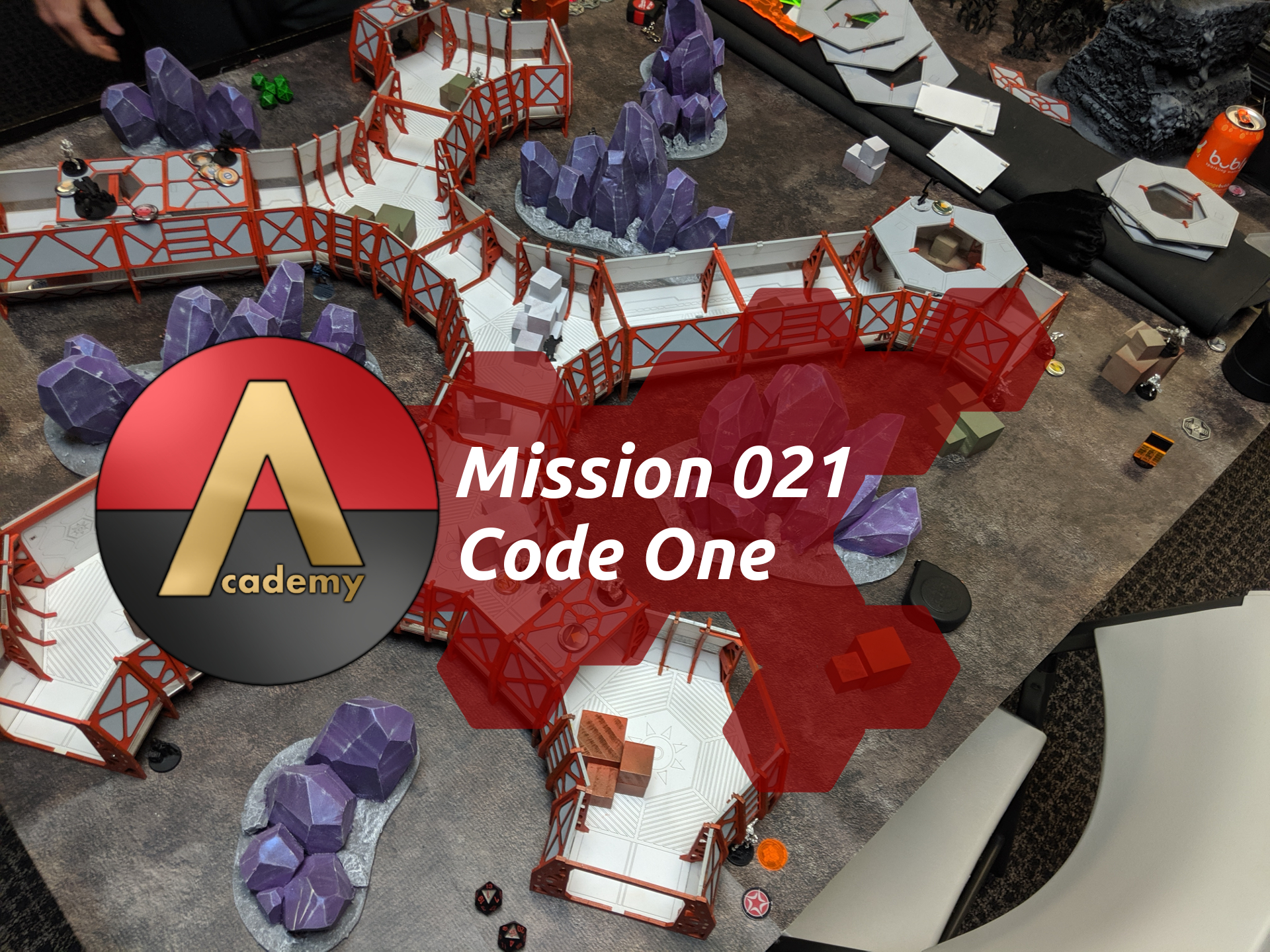 I hope this finds you well! In the intervening time between the Mission 021 statement and the report, I’ve had an opportunity to play another game of Code One and talk about it a lot on the internet. So here’s that content, along with some from Adam, for your convenience!

Game One, Code One
She’s The Law
The Dice Abide’s Initial Impressions

Thanks to all our respondents! I’m sure it’s tough getting games in with everything else that’s going on in the world, so I definitely appreciate those that took the time to do so responsibly and then took more time to write in about them!

We’re still running the Code One painting contest through the end of June, so keep those entries rolling in! We’ve got three so far, which I’ll share at the end of June.

And now it’s time to introduce our winner! This month, it’s the illustrious John (Wes-O-Matic)! Thank you to Clint and Kevin for sharing their thoughts as well, we here at Bromad Academy hope that everyone finds the discussion below as interesting and helpful as we did!

John, I’ll be in touch for you to tell me what you’d like me to mail over! Stay safe out there, everyone!

Played a few 15pts battles in CodeOne, with Combined Army.

The takeaway is that Sheskiin is basically optimized for CodeOne. The smaller map really favors weapons with Spitfire-like range bands, her 6-4 lets her traverse the entire board, and the dodge having movement on active turn means she no longer fears direct template weapons.

Hacking is much more interesting with every hacker having hacking options against everything on any turn. In other word, having Spotlight be an ARO means hackers can hack much more often. And with Targeted lasting until a successful Reset-3, it’s become much more useful.

I’m a fan of the new crit mechanic, adding a dice to the pool is both intuitive, and quick to remedy (before, if they forgot you had crit, they rolled too many dice and had to reroll; now they just roll an extra dice).

I think changing the movement declaration was good, since it’s how quite a few people were playing anyways (that is, they would check distances before deciding exactly where to move their unit). It’s also just more intuitive. Similarly, dodge movement being decided after dice rolls. Again, that’s how many people were playing anyways, and gets around the Schrodinger’s mine situation (dodging into a trigger-area, causing a f2f with a mine, potentially losing and not moving, thus not triggering the mine), since the movement doesn’t trigger mines.

I’m interested to see how this all gets fleshed out in N4. Crits with plasma and the like (things that have 2 separate rolls). What other hacking programs show up in N4. How Targeted interacts with guided/spec fire.

As a learning tool, CodeOne is great. Definitely not going to be my default way to play Infinity but has enough complexity to get new players’ feet wet. I’ll have to try some 20-25 point matches on the bigger table one of these days.

First impressions of the 30pts games:

That’s about all for now. I have some opinions that YJ in Code One seem to be the best faction but I’ll need to play more games first

Hi there! I got in a (socially distanced) Code One game the other day. My friend Ian and I played outside under a handy deck canopy so there was plenty of fresh airflow, and we both donned masks and gloves for the duration of the game. It made looking rules up on my smartphone a little bit awkward, but overall the experience was good and we’ll probably do it again soon.

This one was definitely a learning game for both of us. I’m not going to write up a proper batrep but a little bit of info might help provide context:

You may notice both of us brought S5 LTs, a single hacker, a doctor, and two paramedic line troopers. Since this was a training game for him more than for me and I’m more familiar with the Code One rules, I put together a couple of list options for him to consider, based on close matches with the Infinity minis I know he owns, and then built a similar list for myself but with different emphasis on the various roles. He set up the table, and when we arrived we decided to play Firefight rather than modify the table and wrangle more complex objectives.

I won, but only barely—the last order of the game was a Paramedic roll to stand my LT back up from unconscious, and if I had failed it would have been a 4-3 win for him. But I made both the BS medikit shot and the PH roll, netting me a 6-0 win.

We really enjoyed the streamlined format of Code One. Ian and I are both married dads, so being able to play a game without huge mental overhead was welcome. We may end up playing a slightly houseruled version of Code One even after N4 comes out, incorporating just the bits that appeal to us where possible—there were a few things that we really noticed missing, but the overall structure of the game was a hit.

Active turn Dodge movement and hacking in ARO are fantastic for making the game that much more dynamic and fluid, and unifying the behavior of skills across the active and reactive turns is a good change. The streamlined ammo types are also nice. I think we’re sort of on the fence about losing the impact template for shotguns, but there’s really good clarity between the two modes now and it feels intuitive and comfortable to play in practice.

Measuring during movement declaration makes a lot of sense in terms of table procedures. We decided to measure possible ZoC AROs whenever we thought someone might have one, which worked better for our purposes than the usual Schrödinger’s ARO procedure involved in ZoC ARO declaration. It resulted in a lot less backtracking, which for a learning game was really helpful and clarifying.

Dividing the features of camouflage skills into Camouflage and Mimetism (-X) really helped with table talk more than I expected, because it made it very clear what aspect of which rule was applicable to a given comment without needing to think about it at all.

Crits were definitely less lethal to heavily armored troops in cover, but “I have to roll how many saves?” is a satisfying gameplay experience, and overall I think that the new crit rule is an improvement. It could stand to be an unmodified ARM roll (so no cover bonus) but that would mean rolling the crit armor save separately from any other saves from the same attack, which is an extra step that we were happy not to have.

Playing with the limited feature set of Code One definitely made us miss some things that were sort of basic; both of us thought that the Coup de Grace short skill would have been fine to include, and it’s more intuitive than needing to roll BS or CC to hit an unconscious target that then gets an ARM/BTS save.

Edit from John: I did want to send a small update, though—I realized over the weekend that Coup de Grace is in the Code One rules, it’s just not a Skill anymore. Instead, it’s a special-case use listed at the end of the Close Combat common skill (page 48, last Effects bullet).

I think that we’ll probably houserule in a few additional game features from N4 when playing Code One later in the year. Minelayer, repeaters, Coup de Grace short skill, and Intuitive Attack are prime candidates. Speaking of which…

You can’t declare attacks against camo markers. Template weapons are an attack. There’s no intuitive attack rule that we could find. Sooooo. It really seems like units in camo state are immune to flamethrowers and riotstoppers unless a) you discover them, or b) you catch them under the template while targeting a different enemy, which isn’t intuitive, and doesn’t seem to be explicitly called out in the rules anywhere.

It’s also not explicitly stated whether or not mines can affect units in camo; the rule mentions that enemy markers may trigger the mine, but new players may think that the mine “declares an attack” which you can’t do to units in camo.

Camo is also proof against hacking, apparently? Since both Spotlight and Carbonite are “comms attacks” and you can’t “declare attacks” against a unit in camo, the obvious interpretation is that you cannot hack a unit in camo at all.

In short, a Yu Jing “all camo and Tiger Soldiers” list in Code One is on my radar for my next game, buuut it might not make for a great play experience for the other guy.

Unless you’re playing Firefight (and maybe even then) there’s a strong argument for taking a paramedic line trooper any time you would otherwise take a normal line trooper. This is true especially for PanO and Yu Jing in 25-30 pt games, where they’ll almost certainly be loaded down with PH13-14 HI, and neither faction has access to the WIP 14 doctor that O-12 has. I’d even consider the Shang Ji paramedic, which is a sentence I don’t think I’d have written before.

The combination of 10 troopers and no fireteams helps each model feel significant and useful, and the incentive to take a specialist over an equal-cost generic line trooper doubles up on that. My “filler” models got critical work done during the game, since the last three Orders I used were on a 1 point REM (to kill the Interventor) and a Zhanshi Paramedic (to stand my LT back up) and those were what flipped the game’s score from a loss to a win for me.

Overall, I think Code One will be a great experience for people who like Infinity in principle but don’t have the interest, time, or energy to devote to the full rules. After N4 drops I’ll probably keep playing it when I need some less intense entertainment than a full N4 game offers, and I cannot wait until we get the TAG rules.