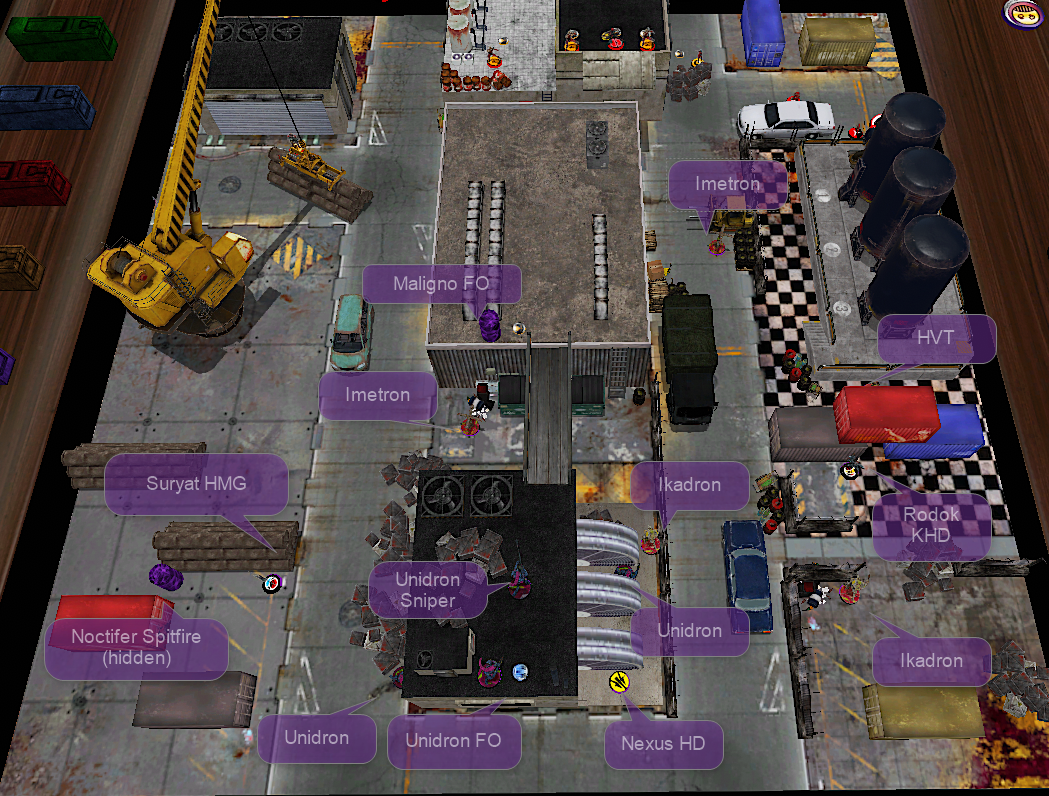 I deploy my short-range weapons (Ikadrons, Rodok) on my right because it has narrower spaces. While the sniper and FO unidrons are on the rooftop in order to provide ARO from long range. My plan is to use the sniper as attack piece if required.

I deploy long-range weapons (HMG, spitfire) on my left because it has wider spaces.

Maligno is on the rooftop because he is the liaison officer and I need him safe. In addition, I have Net-Undermine classified, so it will be easier to accomplish on that rooftop.

I deploy my Greif Operator inside the central building as last model because I want to remove the Moran FO and his Crazy Koalas, while killing his liaison officer. (I realized later that his koalas couldn’t go outside the building because it was closed at the beginning of the game)

My opponent deploys everything really hidden so I cannot shoot him easily in my first turn.

As I want the Moran killed, I reveal my Grief Operator and he shoots the Moran on the back. This is a suicidal move because he takes two koalas and dies. Unfortunately, he missed all his three shots and the Moran stays alive ☹

Now, I am angry and I think there’s another way of killing him. I move my Ikadron to the door, then I open it and burn the poor Moran. He shot me back but he misses.

With the last order from second group, I move the ikadron inside the building and discover a bandit KHD

Now that the hacker is revealed, I think I can kill him with my own KHD. So I Redrum the Bandit through the Ikadron’s repeater. He redrums me back but I win the FtF roll, killing him.

After that, I move the Unidron fireteam in order to have better lines of fire, and I spend the LT order to put the Suryat into Supressive Fire. He doesn’t have long range weapons, so I feel confident even if he’s a bit far.

He starts his turn moving Mcmurrough, and has to face a plasma carabine shot because there’s a narrow line of fire betweent the truck and the wall, but he evades it covered in smoke (1).

Then he tries to cover the haris fireteam in smoke (2), but after missing a couple of times, he goes back to McMurrough. He covers his advance with speculative smoke and moves twice (3), finishing prone next to the truck. At this point, he throws speculative grenades to my Unidron (4) and Rodok (5). He misses the Rodok shot and the Unidron dodges successfully, come on Onix!

He only has two remaining orders from second group, so he reveals his FO Bandit and kills one of my Imetrons (it was closer to the central building on the deployment picture, but it really scattered near that crane. Then he goes back to camo state.

I think I know how to get rid of McMurrough. Firstly, Rodok places a mine without being seen. Secondly, I break the Unidron fireteam and make a coordinated order with a Carabine Unidron and the Rodok. Both of them shoot McMurrough. He tries “dodging” with a smoke grenade but rolls a low number and I hit him twice: with the plasma carabine (crit) and the boarding shotgun. He fails the boarding shotgun and the mine

I only have three orders on my second group now, but it’s enough to move the Ikadron, which is inside the building and make a BBQ with my opponent’s remotes.

All of them shoot as ARO but only one Reaktion shot hits and, luckily, the Ikadron saves it. From the remotes side, one Transductor is dead, the other one saves its armor roll, and the Reaktion zond takes two wounds.

I decide is a good moment to do my classified, so I move my maligno and reveal it in order to Net-Undermine.

Finally, I move a couple of unidrons and reform the link, setting a defensive spot again.

My opponents wants his Reaktion alive, so he makes a Jaguar pop smoke in order to cover both the Reaktion and the Ikadron. Then he sends his SpecOps, and he manages to repair the Reaktion (after spending two command tokens!)

His SpecOps looks like he has lost his mind and wants to engage the Ikadron in close combat!

He tries to stab the Ikadron with a knife, and after spending a couple of orders, the Ikadron is unconcious.

He tries to pop smoke with Massacre again, but misses his speculative fire. I think he’s trying too many speculative attacks but I guess he wants to jump to the central building without being seen by the sniper.

As he has spent many orders, the only thing he does with the rest of his turn is dropping a Hellcat Spitfire out of line of fire, and put him intro suppressive fire.

As it’s my last turn, I want to use the Noctifer Spitfire, so I move the Rodok from first combat group to the second.

First, I want to get rid of that Hellcat, so I move my Unidron out of the fireteam and shoot him from outside the suppressive fire range. He declares shoot but misses and the Hellcat fails his armor rolls.

Secondly, I want to use my LT order because I did nothing with it in my second turn and I send him to chase the bandit because I already know he’s not a hacker.

I move towards him, and he declares an ADHL shot. I throw at him my HMG burst (1) but he saves the only hit I land on him.

After that, I get closer and shoot him again. But, this time he decides to dodge, getting dangerously close (2).

So, now that he’s revealed, I send the Noctifer with Spitfire in order to finish him. He decides to shoot back with his shotgun but the Noctifer is too deadly for him and the bandit dies.

With the remaining orders from second group, I place a mine with the Rodok and put the Noctifer into supressive fire:

After that, I spend some more orders in my LT and I manage to kill his Reaktion again, and his SpecOps, while placing an expensive model on that sector.

Finally, in order to delay his last turn, I try to land a Frakta behind his fireteam, which works!

I decide to shoot Massacre and one Jaguar, trying to tank their chain rifles. I put one jaguar into dogged status and I fail an armor roll.

At this point, I stop spending orders because I prefer him dealing with the Frakta in his turn than losing her by spending another order and receiving a chain template.

At this point, I stop spending orders because I prefer him dealing with the Frakta in his turn than losing her by spending another order and receiving a chain template. So, I reform the fireteam and advance it to get better ARO postions

My opponent has just a few orders and he spends them dealing with the frakta and moving the Lunokhod. However, this is not enough to beat my Suryat’s points.

I think having a Suryat HMG instead of the Nexus hacker allowed me to capture the farthest section.

However, it would have been safer if I had played Suryat HMG with Tactical Awareness instead, removing an Imetron for example.