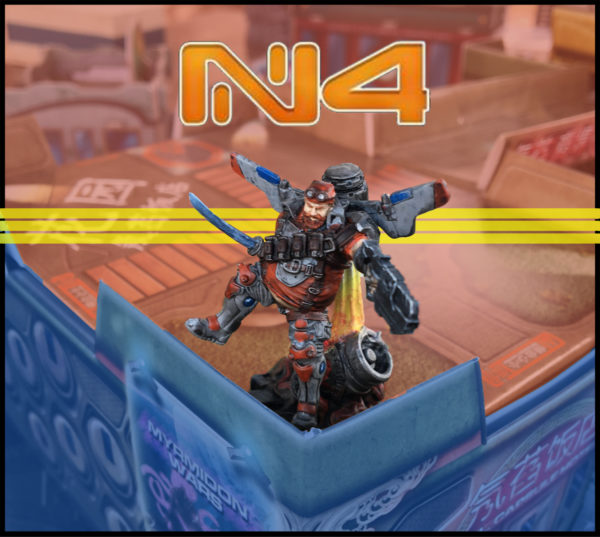 (note: I messed up and didn’t realize I had the Regular Daoying hacker instead of the Lieutenant Daoying Hacker.  It let me cheat and take a WarCor I shouldn’t have had).

The Mission featured four consoles and two Mercs that would ARO on anyone (enemies to all). I lost the Lieutenant roll and Varuna chose deployment leaving me to choose initiative.  I chose to go second thinking that the game would be won or lost in the last turn and I wanted to control that outcome.

I set up my Core Link on the right building with most of my specialists thinking that getting 3 of the 4 consoles should be enough and would have the strongest presence to stop Varuna from getting his fourth console. My TR bots would help control the center and left side while the Rui Shi and Mowang (not pictured below) would start in the center and be used to help whatever side needed it the most.

Varuna counter deployed his Core Link opposite mine and left the center pretty open, focusing more on the flanks of the field.  A large Camo presence was on the left side of the field making it feel more lopsided than it really was.

Varuna starts off by sending out a Zulu-Cobra hacker to pick up the first console, revealing herself in the process and opening her up to a crazy Yuan Yuan (using Fusilier stats).  The Yuan Yuan gets in a lucky hit as she leaves and drops her behind some cover.

Varuna’s Machinist runs out and picks up the second console pretty much unmolested as I don’t have any sight lines and the Yuan Yuans are too far forward to see the other console.

All of my consoles are in view of the Yuan Yuans so I have a Rui Shi burn a couple of orders taking them down.  I bring a hacker down from the building with the Core Link and she logs into the first console.  I realize I don’t have anyone near the second console except an engineer prone, tending to the HMG TR bot.  I don’t have enough orders to get him over there due to a lot of open firing lanes from the camo troopers.  I get him down and as far as I can without getting shot up.  Then I move my War Cor out to help cover Pan-O’s 3rd console.  I move the Rui Shi and Mowang up to help block off advances to the consoles on my side of the board and then dropped both into suppressive fire.

I realize that I was thinking a little too literally when I placed the Rui Shi and Mowang in defensive positions but angling them so neither would actually cover the other. Only the Rui Shi had eyes on the next console which left it and the Combi TR bot the mainline of defense.  A Zulu Cobra spitfire uncamo’d and dropped the Combi TR Bot while the Croc Man took down the Rui Shi.

I had my War Cor out there to be a nuisance but an ORC made his way over and dropped him too.  With the lanes all clear, the Varuna Machinist ran down and flipped the third console.

I have my Core Linked Missile bot swing out and take down the Croc Man and then my Mowang and Lu Duan come out to push the Zulu Cobra back into hiding while taking down both a combi bot and flash pulse bot.  The way to the second console is clear but I waste my Engineer on picking back up the Rui Shi and TR Combi Bot instead of getting him to the second console and getting back into the game that I’m trailing now three consoles to two.  I figure I still have a shot as long as Varuna doesn’t get the last console.  I put the Rui Shi on guard duty again to cover Varuna’s last console.  I still have my hacker near it so if another hacker comes by, I should be able to cover the console with enough range that a suicide run isn’t possible.

I put too much faith in my Rui Shi and hacker.  Varuna used a palbot to rez the Zulu Hacker who then went into camo.  Using a linked Kamua HMG, Varuna dropped my Rui Shi and then Stealthed the Zulu Hacker straight up the last console and turned it on. I had forgotten that specialist was still in play and didn’t realize it also had stealth to stop any hacking ARO on the way in though that point might be moot as I can’t hack a camo token anyway.

To add insult to injury, my double hacking ARO fails to do anything and the Zulu is able to set up camp in suppressive fire behind cover and in full view of the field I need to cross to get to the 3rd console.

Most of my units are still up but I’m in really bad shape.  I’m able to get my Engineer across the middle and turn on console 2 before being downed by reaction fire. I have Tai Sheng get her team up and moving to take the 3rd console.  She takes incoming fire from both the Zulu Hacker and a Core Linked Orc Feuerbach.  She splits fire between the two, fending off the Feuerbach but critting the Zulu Hacker. Unfortunately, the hacker still just tanks the crits and passes its guts roll to remain an issue. I have to try again but this time the Feuerbach gets through and takes her down.  The link is broken and I’m out of command tokens to reform into anything useful.

I run a hacker up through fire to target state a Fusilier in the link team and then rain a guided missile down, catching it and a paramedic.  The Paramedic dies but the Fusilier passes all three explosion saves and passes his guts roll to stay blocking the lane to the console.  The hacker dies for her efforts.  I have only a few orders left and send my remaining hacker out to suicide run hoping my dice will turn or Varuna’s will cool down. They don’t and she dies. Tired.

Lots of mistakes from my side and very few mistakes on Varuna’s side to make for the lopsided 4 to 10 loss. Even though I knew I needed to protect that last console, I left it relatively easy to get to.  I did this both times when it came to consoles on my side, overestimating what a few ARO units can actually accomplish. Focusing on rezzing the Rui Shi was also a painful mistake as I used several command tokens to succeed on the roll. The Rui Shi has been built up in my mind as this thing to fear but I think that is misguided on my part and definitely not something I should dedicate as a full stop ARO piece.

All-in-all it was a good learning game for me and at the end of the day, a game outdoors in the pandemic is so much better off than where we were at months ago. I’ll regroup and try to take the lessons learned forward into the next game.

Regarding the changes to N4, I’m still a pretty new player and only just got into N3 before the edition change.  I knew the basics but didn’t have many full games under my belt.  With N4, I already like the simplification of the concepts, streamlining the skills and options into meaningful choices, not just choices to have other things to do.  I really appreciate the de-nesting of all the skills so my friends and I don’t fall down too many rabbit holes looking for a specific ruling.

I’m undecided on crits. I seem to get the short end no matter what.  In N3, my Mowang would drop to successive lucky crits while in cover and there was nothing I could do about it.  I crit this Zulu hacker and she tanks it all.  More examples just pepper the fact that, if it is a crit, it usually never goes my way. The limited army slots don’t bother me as I never played with more than 15 orders.  I like the game more confined as it feels more like a skirmish and 20+ orders sounds like a slog to get through.

My full report with more photos/thoughts is posted on my blog: http://pimpmyboardgame.com/?p=10512