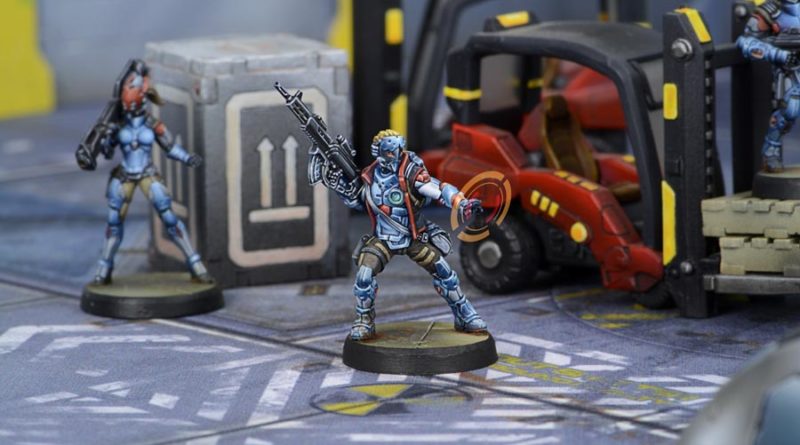 After playing SAA for a while now and watching someone play NCA lately I immediate wanted to try them out. A friend of mine is still trying to find his way with Kosmoflot so it was settled.

SAA has been my entry point into Panoceania. As much fun as it is to play them, I don’t feel they have the true brute force of Panoceania. After watching a match and reading about NCA, I felt that was the kind of Panoceania that I wanted to try. With most armies I think about clever ways to be able to engage powerful gunfighters. Here, this isn’t necessary as a lot of really powerful gunfighters are available.

I obviously wanted to try the linked Aquila guard as it is really powerful. I teamed it up with my dear Orc BSG who never let’s me down (Note, while Army doesn’t allow him to join Fusilier links, the sectorial chart states he can – so we allowed him to join) and a couple of fusiliers to help out (hacker, paramedic, HMG).

As this month mission is about over infiltration I took a pair of Locust. Usually I do not like infiltrators without camo state, but with over-infiltration I felt they could actually be interesting and chose the shock marksman rifle for this. If he does not overinfiltrate he still brings a gun to raid the midfield. With cover, mimetism (-6) and suppressive fire he can be hard to dislodge. The KHD was supposed to help with missions and still brings a breaker combi which is nice vs Ariadna. If I had  first turn, I would have tried to over infiltrate him as well. Sadly, my commander was watching too many videos with cute kitties while mission planing (20 on initiave roll), so proud Panoceania showed up late…

The remaining points were spent on several support and utility units: a standard fusi and auxiliars as cheerleader and DZ protection,  a bolt as ARO team up with an Engineer and Bulleteer. Then, just a warcor could be added, so I was finished.

A Bear, a wolf and an Unknown Ranger GROUP 1

My opponent brought Kosmoflot and his list contained pretty much everything that you might expect to see: A big bear, sneaky Uxia, Margot and her big doggy, the ranger-you-know-who linked with varagian and a Volkolak for some longer range. The Lt was backed with decoys and finally a SAS and a Irmandinho. Not frills. This seems to be very much depending on going first for me, but he performed well with this going second in another game.

I chose red side. I think this was the initial mistake. Pano should always take blue. My opponent set up his forces save Uxia pretty defensively – going first anyway. I figured out there were about 100 pts missed and knew what to expect. Still, I did not bring something to proper counter deploy Uxia. I deployed the warcor to see the SAS, Aquila Bulleteer and Bolt in ARO – usually I’m more conservative, but hey NCA is about brute force. As the central high tower was my aim for sabotage I’ve put the KHD Locust close and guarding the panoplies. There wasn’t much to feat from range on this side… After setting up my Fusi and Auxiliars – saving the second Locust Uxia showed up just behind the first Locust. Then, I was searching for a spot for my Locust… There were a lot of Template weapons pretty much everywhere, so I thought I could disrupt the link by setting him up just in front and putting him into suppressive fire forgetting about the Volkolaks chain colts.

I think my deployment was rather poorly. It was late already when we started and I didn’t want to make it take too long. Still in infinity deployment is essential. We will see my error in just a second.

If Uxia is there she want’s to play immediately of course. Seeing the Locust’s back she tried her BSG in template mode but the humble Locust dodged – at least once. The second round took him out.

She then re-camoed as bolt, warcor and bulleteer could see the gate. Advancing into my DZ the warcor immediately discovered her – paparazzi and (in)famous celebs… Still she managed to unleash a round of bullets onto the bolt. Bolt hit with an 11, while Uxia rolled on 9s. But she crit’ed rendering him unconscious. The Bulleteer took her out. I believe at some point she took out the warcor as well – I do not remember where he died, but it was first turn…

Then, the Volkolak drew his chain colts remembering me that they are a thing. Good bye Locust no2. That was just stupid – ah well…

The link advanced and the Volkolak wanted to prove himself against the Aquila – 5 dice on 15s vs 2 dice on 21s. As the Aquila couldn’t miss he just rolled as low as possible immediately dropping unconscious. That could have worked better… I wanted to drop him in guts anyway but that took away the need for that.

Finally, the Ranger-Who-Must-Not-Be-Named pushed the link further to get minimal vision of the paramedic, enough to eliminate the poor fusilier. At that point I was wondering what the courageous girl did so far in front.

Then, only Irmandinho had his order left advancing towards the panoplies.

Missing 160 army points first turn hurt pretty badly. I was about to call it, but decided to just see whether there was anything I could do. I figured that the Kosmoflot link was placed poorly and first tried to shoot the advanced Varangian with my fusilier hacker (green border in the images), but he vanished behind smoke totally hiding the Ranger-You-Know-Who. This action at least gave me the chance to advance with the Orc close to the Aquila corpse. So I advanced him to the front corner of the building so the Ranger-You-Know-Who could see him provoking shots (without sixth sense). The UR took his opportunity eating 3 templates from the BSG. While the Orc wasn’t even hit the UR explodes.

Then, the humble Fusi HMG (red border in the images) got his chance to take revenge for the Aquila from the other side of the building and shoot the Volkolak and the Varangians. Two Varagians went down and the Volkolak took a wound, then I’m out of orders – Lucky Volkolak.

On the other side of the field the remainings of the haris team – it should have been broken actually, but it doesn’t make a big difference – advanced and the Bulleteer executed Uxia for an classified standing in the open and I was done.

First, Irmandinho used his order to grasp something from the Panoplies.

With Uxia gone it was time for the other celebs to show up… Orc and HMG managed to dodge to get the doggy into sight, the flamer of the auxbot wasn’t heated up enough…

Duroc charged to the Fusilier unleashing his chain rifle onto all four guys standing there and took shots from Orc and Auxbot in return, while the others tried to dodge. While the big antipode droped in the shootout  the HMG Fusi dodged back into cover and hacker and Auxbot somehow managed to save both hits. Just the Orc took a wound, booooh.

With the dog gone, his girlfriend showed up on the other side of the table shooting the bulleteer in the mechanical back taking it down. Then she wanted to get to she unconscious body for a classified, first shooting the fusilier and then getting shot by the humble auxiliar. Well, that could have been much worse.

The Volkolak tried to avenge the famous Antipode, but did not manage to kill the humble Fusilier HMG.

Finally, the SAS picked up a multirifle from the panoplies.

I pushed the machinist into combat group one and took a run with him aiming to take the bulleteer back up and try to do my sabotage classified. The first goal is accomplished with the help of a command token – pano engineers…..

After advancing I figured that I might be able to see the Irmandiho when I show up behind the wall, but I wanted to give it a try. Sadly, we traded pieces. So all I could do was reposition my link.

The Volkolak was embarrassed and was up for another try on the Fusi HMG. First, he shot the Orc (bad positioning again, it becomes a theme – why I put the Orc with BSG into overwatch remains a mystery even to myself). After a couple of orders, the Volkolak managed to finally shoot the HMG Fusi – a sad day for Panoceania, he will be missed.

The remaining orders were used to evacuate the Ariadnian troops searching for total cover as far off as possible.

I used another Command token to put the Bulleteer into group one. With not much else to do – all specialists dead that could do classifieds, the only enemy who was a specialist hiding in camo – I decided to just run the bulleteer up the board to secure the enemy HVT. I managed to get into LOF of the SAS, but failed to discover. So I called it a day.

The game pretty much missed it’s point – trying overinfiltration and NCA. Uxia had a reasonable day, but that’s what one would expect of her, the Locusts suffered from bad panoceanian planning. At least there is one thing that I can share about over infiltration: There is not always a spot for you to use it. I was too cocky with the Locust due to it’s mods (mimetism, cover, suppressive fire) which is especially difficult for Ariadna to dislodge – except in chain colt range … But templates would have been in the other parts of the board as well (bearpode, SAS, Irmandinho).

And even for NCA I can state: Even if all the big pieces are gone, even the cheap stuff – Fusis, Auxiliars, Orcs – are still pretty good at defending themselves. Especially the Fusi HMG and the Orc BSG saved my day and at least got me back into the game. If the Bulleteer would have managed to kill the SAS in the last turn it would have been 2 – 3 as we would have both killed 4 specialists and comparing this with the results of Kosmoflot’s turn one sounds pretty alright. I cannot curse dice as they were good in my turn one and Kosmoflots turn two – just positioning and deciding whether something might be able to go into overwatch – looking at you Aquila and Orc – were poor and decided the outcome of the game. In the after math in second turn I could have already swapped combat group with the unconscious bulleteer and give it a run instead of the machinist, but I wasn’t sure swapping unconscious troops is legal – so I forfeit it. Actually, I did recognize that I had so many specialists killed as Uxia and the unknown ranger are spec ops. That could have changed the game. So main take away: more concentration! I will need to try NCA and overinfiltration again.