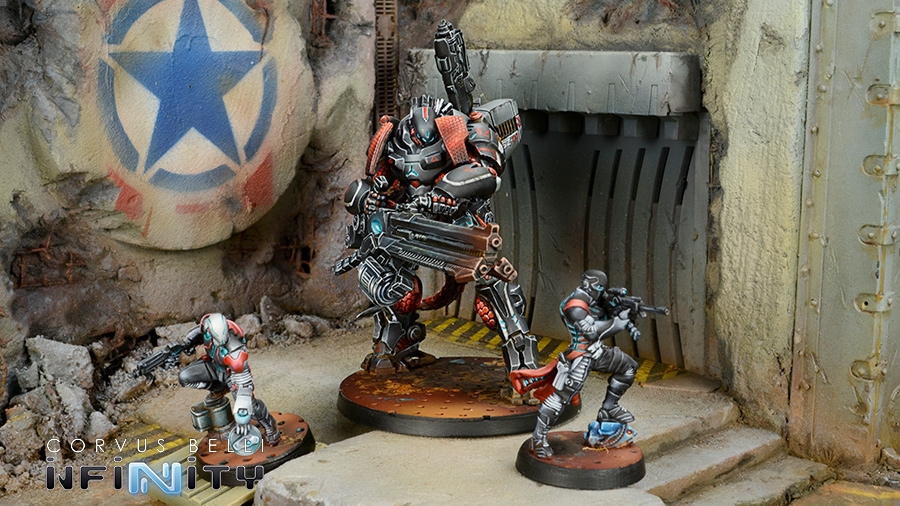 Haqq won the Initiative roll and decided to go first.

Nomads were a go to choice for me, as they use the Coordinated Orders the best, though I was thinking about putting together a blasphemy (PanO) list.

I haven’t played my friends vanilla Haqq and Hassassin Bahram for a while so I deployed quite casually. Left Szally in reserve. Custodier Lt in a corner with a decent security team consisting on a Baggage REM (that could protect her from Fidays), a Morlock, Szally, lots of potential ARO and Sin Eater on a cliff overlooking the middle of a board with his MSR (which should have been an HMG, considering the map and ranges we were playing with, but you can hardly ever prepare for a table, especially one without good sniper nests.

Haqq obviously deployed Fiday in front of Sin-Eater from reserve. Shakush as a tryout for my friend kept the middle. Daylamis all around the place. One of the Nazarova twins was left in the bottom left corner from where she led the main assault.

I didn’t use the CT for anything and that caused the hell to unleash. Zuleyka ran the left flank along with Red Fury Mukhtar. She put down some smoke for him and he proceeded to fight Sin Eater. Both of them got Targeted by my hackers.

Once Sin-Eater was down Fiday went through his position to reach my Custodier that was the only lt possibility in my list took her, Salyut and a Morlock down in a literal blaze of glory (though he managed to succeed his ARM save from Szally’s Flamethrower).

Zuleyka then got in front of Moran to let him play with fire and managed to kill him while he put a CrazyKoala down in his ARO.

Eventually she hid in a Corner leaving her Motorcycle by the rock.

And Daylami next to her dodges the Koala.

Sooo, to kick things off I start in a Loss of Lieutenant. Great. Szally takes on Mukhtar in the building only to let him go Prone in a shoot off.

Pi-Well gets Assisted Fire from EVO Salyut and goes after Daylami near the Zuleyka. Easy job and he’s off the table.

Then Pi-Well tries his luck  (1st Command Token to conver Irregular Order to a Regular one for him) against Zuleyka and gets rekt by her Flamethrower, but manages to take her out as well. Stempler gets out trying to get space on the left side. Zoe walks to the corner near her. Another 2 Command Tokens and I put 4 models into Suppressive Fire.

At the end of Round 1 Haqq had 3 Zones while I controlled 1 which resulted in a juicy 3-0 beggining of the game.

Haqqislam starts with an Al Hawwa’ approaching my KHD Zero on top of the left side hill and killing him (sadly I didn’t get a shot of that).

Shakush gets to the middle and proceeds to take out my hasty Morlock and a Stempler behind him while getting stunned by my Transductor Zond. Then he falls back and Liberto goes in to put a mine near the middle of the table.

Szally gets into the middle to do stuff. She got buffed with Fairy Dust, because I didn’t have a better way to spend EVO’s order, since everything else in it’s group died. Szally found some cover behind a tiny rock and after a few shots she managed to push Mukhtar back into Total Cover only to dig him out. I spent a whole turn fighting a Liberto, Mukhtar and Nadhir with Falmmenspeer that my friend loves to use ever since he saw that unit. I had my eyes on one more Daylami back in Haqq DZ, but I didn’t have enough fuel in Orders to get to him. With the last Order I killed Liberto instead of going into Suppressive Fire.

At the end of the round I nominated Szally as my Lieutenant since I considered her to have pretty high chances of surviving there and she would need fuel in the 3rd Round. This time I managed to Control both of my Zones and the score went 1-4.

Haqqislam decided to put Shakush in a role he was designed to fulfill. That meant killing armored Szally. Both in good ranges were shooting each other for a few turns until Shakush lost 2 STR to a Critical Hit from my HRMC, while Szally lost only 1 STR to all that firepower and Haqq used a CT or two to shuffle some units while fighting Szally.

One of the camo markers on the 2nd floor of the building got closer to Szally in the process of shuffling and decided to take the matter into his own hands. He turned out to be a Farzan with a Boarding Shotgun and managed to put 2 STR ‘wounds’ into Szally in his first try. This left me in LoL again.

With 4 Irregular Orders and 1 CT left I pushed left side Moran to the enemy zone and Transductor to control my left zone. Along the way Moran managed to take out Ghulam at the far end of the table (who was an Lt) and was fighting for control with an Al Hawwa’.

Eventually a price reduction and a Hacking Device on Hawwa decide the controll to be in favor of Haqqislam.

So the game was overall lost due to my two turns in Loss of Lieutenant that could have been averted if I deployed more carefully. I played vanilla Nomads competitively for a long while and I feel like Coordinated Orders belong more to vanilla armies, because they lack any other way to move multiple troopers in a single Order. It’s especially important when you have zones to control and not only push a single unit to kill everything. You basically get 4 Orders of Move-Move for the price of 1 Order and 1 CT.
Over my 4 years of playing I never managed to get to a position to do a Coordinated Order of shooting to push hard decisions on my opponent and as I am writing this I want to challenge myself to try that in the upcoming future.